Stage is Set for Shallow Showdown on Pickwick 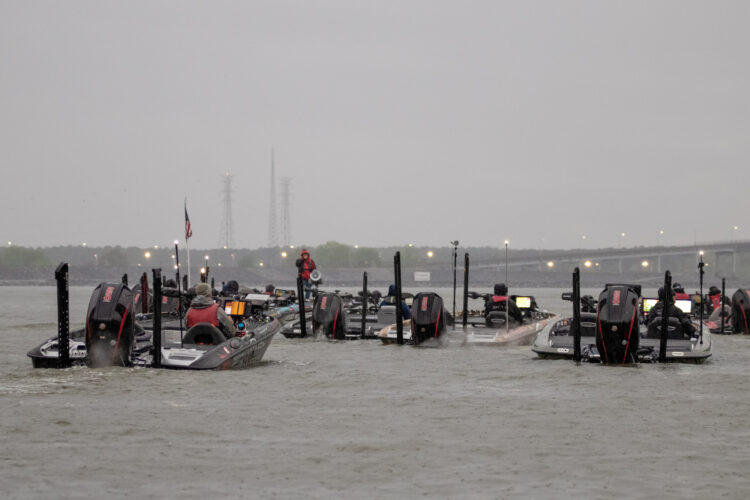 COUNCE, Tenn. – Visiting the Tennessee River isn’t a shocker for the Tackle Warehouse Pro Circuit Presented by Fuel Me, but doing so in mid-April is. With the famed ledge bite the Tennessee River is known for still a few weeks out, fans this week can expect to see plenty of shallow-water action for Lithium Pros Stop 3 on Pickwick Lake Presented by Covercraft, which should shine some new light on the TVA impoundment.

Of course, this wouldn’t be a Pro Circuit event without some challenging conditions thrown at the anglers during the official practice days earlier this week. A bit of rain, wind and cooler temperatures limited how much the pros could run around in practice and when you couple that with falling water, it didn’t make a good recipe for success. However, that’s going to change starting today. With the water stabilizing and highs in the 80s forecast for the entirety of the event, the lake may very well show what it can do – and has been doing for the last several years – as loads of prespawn bass wait to settle in on the bank.

There aren’t many pros in the field that have competed in a major tournament this time of the year on the Tennessee River, so having prior experience on the system in April could be a big deal this week. Though Wesley Strader cut his teeth upstream on Watts Bar and Lake Chickamauga, he’s well versed on the Tennessee River as a whole and thinks the fishing this week should improve from practice.

“I think the fishing is going to get better, I mean I didn’t have a bad practice, but it wasn’t one of those ‘oh my God I’m going to wreck ‘em practices,’” said Strader. “Fishing, in general, is going to get better because we’re going to have warmer nights and our first 80-degree day today, plus the current is going to slow up a bit. I think a lot of fish were already spawning before the water came up and it got tougher to catch them. Then, (the TVA) pulled the water down and that didn’t help.

“I don’t think the majority of the fish have come up and spawned,” he added. “I think they’ve been waiting on the water to get right. It’s been up and down and up and down. If you live on the Tennessee River, you know fish do not spawn if the water is coming up or going down. They’ll wait ‘till it gets stable and when it does, they get busy doing their thing.”

As of now, the water level is projected rise from 414.35 to 414.50 as of midnight tonight and hold that level through Friday. Warm temps and stable water are two things that have pros like Strader eager to see what they can mine from Pickwick.

Entire Lake is in Play According to Hall

Pro Circuit rookie Blake Hall has had this tournament circled on his calendar since he qualified and now is his chance to see what he can do. Guiding on Pickwick and other Tennessee River lakes, Hall is one of the most experienced anglers in the field on this pond and says there’s a lot going on right now.

“I think there will be a little bit of everything going on,” said Hall. “I don’t think we’ll see weights as high as we would in March or May when the fish are grouped up more either prespawn or postspawn. Right now it’s more of a spawning deal, so they’re more spread out, but I think everybody will catch fish.

“We’ll see fish caught from Bay Springs and Wilson and all over Pickwick. The only thing I don’t see happening is any sort of offshore ledge bite, though I may keep looking as the tournament goes on. There might be some offshore shallow bar prespawn fish caught and I think it’ll be a good tournament because everybody will be spread out.”

With plenty of ways to catch fish shallow, from a vibrating jig to flipping and sight-fishing, the anglers will have options. It’s also not wild to think there could be a bit of shad spawn happening, but with water temps in the low 60s, Hall believes it’s still a bit early.

“Typically, with my experience on the Tennessee River, a 70-degree water temp is the magic number for that and we’re not even close to that,” said Hall. “I’ve seen it happen this time of year, but we’re way behind this spring so I think we’re two weeks away from anything like that.”

Over the years, winning weights at Pickwick have varied widely, with some of the top weights coming back in the early heyday of ledge fishing, like when Randy Haynes won the 2013 EverStart Series event with 79 pounds, 11 ounces over three days. Recently, the Toyota Series Championship back in the fall showcased the variability of Pickwick. In that event, Mikey Keyso finished second with 48-1, but Brent Crow won with 52-2, almost half of which was his 23-1 final-day sack of tailrace smallmouths.

This time around, with a lot of prespawn fish in the mix and good weather, most are figuring on pretty decent fishing. On the low end, Larry Nixon and Hall think that 45 pounds will make the Top 10. Strader lands in the middle guessing 45 to 50 pounds will make it. On the high end, Mark Rose reckons it’ll take 54 pounds to make the cut, which roughs out to about 18 pounds per day.

“We’re guessing 12 ½ pounds a day to get 50th place, it could be more, but that’s what we’re thinking just because it really hasn’t been stellar fishing,” Strader said. “I mean, it’s the end of April and you should be able to just go down the bank and throw at something and catch little ones, but you can’t do that right now – or you couldn’t in practice just because we’re going away from a full moon and the weather we had wasn’t a good fishing situation.”

On the final day, with the weights zeroed, it’s really anyone’s guess what the winning weight will be. Barring disaster, it’ll almost certainly take more than 20 pounds to win the shootout, and it wouldn’t be a surprise to see a pro or two slug their way past the 25-pound mark. With the caliber of fish in Pickwick, both green and brown, there’s a lot that can happen on any day.