Top 10 Baits from the James River 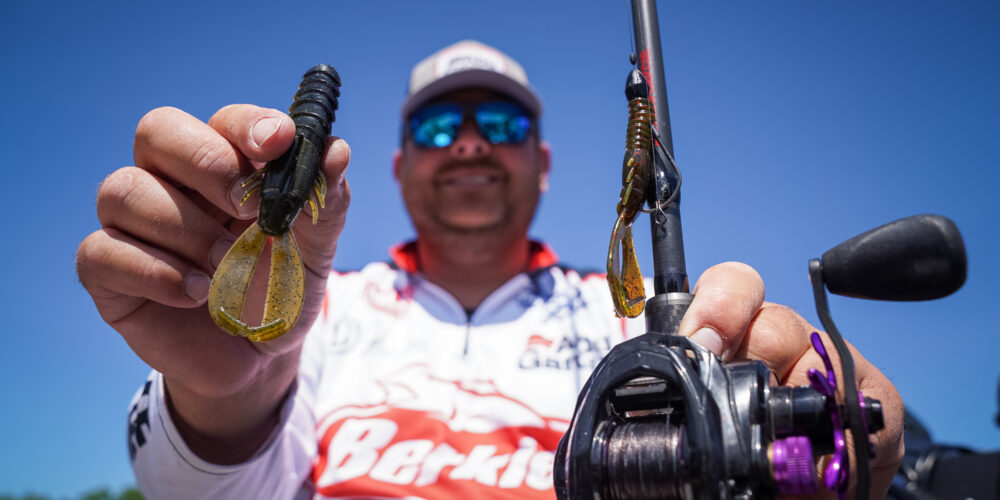 RICHMOND, Va. – The top baits at Toyota Stop 5 Presented by PowerStop Brakes on the James River included a nice mix of power fishing favorites like frogs, ChatterBaits, shallow crankbaits, and buzzbaits. There was also a variety of soft plastics accounting for the catches. While it was the first time in a long time that the Tackle Warehouse Pro Circuit Presented by Fuel Me pros had been to the James, the anglers rapidly found what worked best.

Here’s a rundown of the baits used by the Top 10 anglers.

1. Taking his second win in a row, Nick LeBrun did it by primarily sticking to his winning stretch of docks and cypress trees in the Chickahominy River. He rotated between different ultra-shallow crankbaits in bluegill patterns and added No. 2 Hayabusa TBL930 trebles to replace the stock hooks.

The crankbait allowed him to catch solid bags the first two days, but he began to mix in a wacky-rigged junebug V&M Chopstick soft stick bait on the third day. That bait was important then and proved to be the difference-maker on the final day. He rigged the Chopstick on a 1/0 Hayabusa WRM201 hook.

2. Dakota Ebare caught some bass on a frog, but the vast majority came by pitching a Strike King Rage Bug in the Bama bug color on a 3/0 Owner Jungle Flipping Hook with a ¾-ounce Woo! Tungsten weight. He stuck to lily pads in the Chickahominy River to catch most of his fish during the week but added a 5-pounder on a medium diving crankbait on a wing dam late on the final day.

3. Mitch Crane focused on small creeks as the water was moving in with the tide and the bass were moving right along with it. To catch his fish, he used a ½-ounce white and chartreuse Z-Man Evergreen ChatterBait JackHammer with a white Yamamoto Zako trailer and a 3/8-ounce Nichols Reflex Buzzbait. He used a white (blue shad) buzzbait when the water tended to be dirtier in the morning, and black as the water cleaned up later in the day with the changing tide.

4. Michael Neal fished the backs of small creeks with a vibrating jig, frog, and buzzbait. The latter two were his primary weapons and allowed him to take fourth place and rise up the standings in the Angler of the Year race. He fished a white 3/8-ounce Big Bite Baits Skipping Toad Buzzbait and a natural red SPRO Bronzeye Poppin’ Frog.

5. Hard targets like rocks, wood, boat docks, and brush were the things Braxton Setzer keyed on as he fished from takeoff to Gunn’s Run. His top baits were a Yo-Zuri 3DB Series 1.5 Squarebill Crankbait in natural bluegill and a black and blue 3/8-ounce Nichols DB’s Finesse Jig with a green pumpkin chunk as the trailer to imitate bluegill in stained water.

6. Ohio pro Cole Floyd junk fished to a Top 10 by focusing on channel swings, wood, shade, and grass in the Chippokes area. He caught fish with a Strike King Sexy Frog in the sexy frog color, a black Strike King Skipping Buzzbait, and a Strike King Rage Bug in both the moon juice and chameleon colors.

7. Cole Hewett had multiple patterns in different river sections and with different baits. Early each day, he fished the Chickahominy River with a homemade 3/8-ounce buzzbait with white Strike King Menace Grub. He also mixed in a black SPRO Bronzeye Frog Jr. Later, he fished a 3/8-ounce Z-Man Evergreen ChatterBait JackHammer with a matching Missile Baits Shockwave Swimbait and SPRO Fat Papa Squarebill in the 55 and 70 sizes in the chartreuse black back and nasty shad colors around isolated rock and wood away from the bank.

8. Rookie Robby Lefere notched his first Top 10 at the pro level fishing a white Strike King Thunder Cricket around docks as the water dropped with the tide. He also caught fish eddies and undercut banks by flipping a black and blue Strike King Rage Punch Bug and fishing a morning dawn Strike King Dream Shot on a drop-shot.

9. Virginia pro Martin Villa made it to the final day fishing lily pads in the Chickahominy with soft plastics rigged several ways. He pitched a green pumpkin Zoom Magnum Finesse Worm, a Missile Baits D Bomb and a Reaction Innovations Sweet Beaver. As the event progressed, he added a shaky head and Neko rig.

10. John Cox began the event fishing a white Berkley vibrating jig, but after ending the first day in 93rd, he knew he needed a change. He decided to slow down and start flipping a Berkley PowerBait Shape 108 in watermelon red with a 3/0 Berkley Fusion19 Heavy Cover Hook and a ¼-ounce weight.