Top 10 Baits from the St. Lawrence 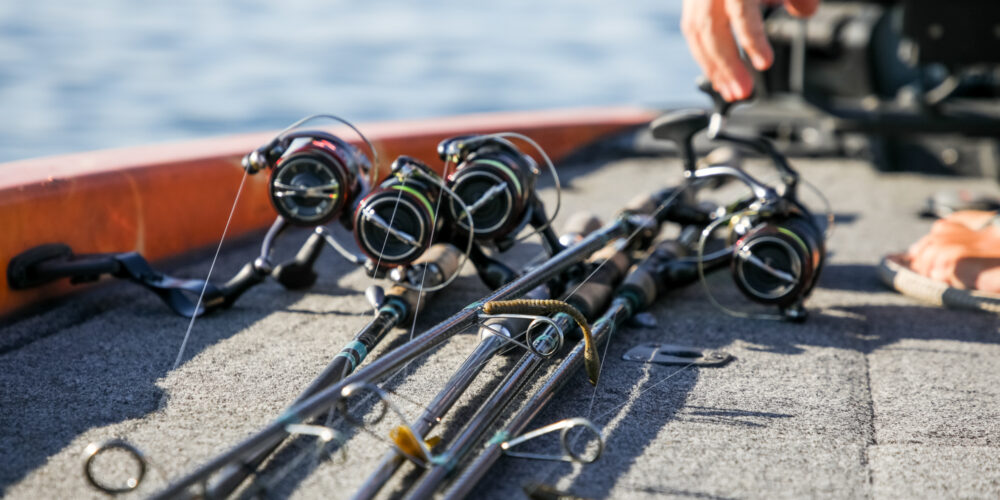 Drop-shots, spinning rods and light line – these were obvious players for the Top 10 of the  Tackle Warehouse Pro Circuit Presented by Bad Boy Mowers on the St. Lawrence River.

However, there were also a few oddballs thrown in as anglers scrambled anywhere from a couple miles around the ramp to 90 miles upriver to catch their fish at  Savage Arms Stop 6 Presented by Abu Garcia.

Here’s a look at the baits that helped the Top 10 anglers wrestle big, angry smallmouth.

1. All he wanted to do was punch his ticket to the Tackle Warehouse TITLE when he showed up, and then just to finish second after launching the final day nearly 7 pounds behind the leader. Yet, in the end, Cody Pike went above and beyond, as the rookie earned his first win in shocking fashion thanks to a green pumpkin Berkley PowerBait MaxScent Flat Worm on a drop-shot with a 1/2-ounce Eco Pro Tungsten weight and 6- and 7-pound-test Gamma Touch fluorocarbon line.

2. Fishing just like he would on the rivers back in Wisconsin – albeit a bit deeper because of the St. Lawrence’s clear water – Matthew Stefan weeded through plenty of fish on various colors of Berkley PowerBait MaxScent Flat Worms on a ½- or 5/16-ounce drop-shot depending on the current. He also mixed in a Ned rig the final two days on some shallow flats.

3. No one was better than Joey Cifuentes this week for three days. Unfortunately for him, the tournament was four days, as he couldn’t hang on to his near 7-pound lead the final day and slipped to third. His main tool was a 3/8-ounce drop-shot armed with a No. 2 Berkley Fusion19 hook tipped with various colors of Berkley PowerBait MaxScent Flat Worms. He threw it on a 7-foot, medium-heavy Abu Garcia Veracity spinning rod and Abu Garcia Revo X spinning reel spooled with 10-pound Berkley X5 braid to an 8-pound Berkley Trilene 100% Fluorocarbon leader.

4. It was rinse-and-repeat success for Scott Dobson this week. Just like he did in 2016 and 2019, Dobson made the 90-mile run to fish the same shallow flats near Wolfe Island he always does. He didn’t even switch up his offerings, cycling through various jerkbaits like the Megabass Ito Vision 110 or Lucky Craft Pointer, or a Duo Realis Spinbait to try and cover water or get a fish to follow his lure. If one did or he saw one cruising, he’d immediately pitch a Ned rig with a Z-Man Finesse TRD or a 3/8-ounce drop-shot tipped with a Berkley Gulp! 3-inch minnow (watermelon pearl).

5. Had he been able to fish his best stuff the final two days, Jon Canada might’ve truly made a run at the victory this week. Unfortunately, boat issues and locals derailed him the final two days. Still, a Berkley PowerBait MaxScent Flat Worm and a prototype, larger-sized Reaction Innovations Shiver Shot helped him secure the Top 10.

6. No plan? No problem for John Cox, as the pro simply fished shallow like usual and bounced between a buffet of Berkley PowerBait MaxScent offerings, including the new Lil’ Trooper, Hit Worm, Flat Worm and Flatnose Minnow. He used them just about any way, possible, too, from on a jighead to a drop-shot to weightless. One change he made this week was switching from his typical 7-foot, medium Abu Garcia Fantasista Premier spinning rod to a 7-6 model with the jighead to make longer casts to the wary shallow fish.

7. A month ago Skeet Reese secured a top-five finish on the St. Lawrence fishing the flats in Eel Bay. He saw no reason to deviate, as he took the Angler of the Year race to nearly the final day using a one-two punch of a Lucky Craft Pointer 78 DD in Table Rock Shad to cover water, and a wacky-rigged 4-inch Berkley PowerBait MaxScent The General in green pumpkin to pitch to fish he saw follow the jerkbait or just cruising around. On The General, he’d pitch it weightless if it was calm or he’d rig it wacky-style on a drop-shot if it was windier, with either tied to a 12-pound Berkley Nanofil mainline with an 8-pound Berkley Trilene 100% Fluorocarbon leader.

8. Ron Nelson was all over the map this week, both literally and figuratively. He fished everywhere from close to takeoff to 90 miles away in Cape Vincent, doing everything from sight-fishing to hitting deep drops to fishing shallow flats. As for presentations, he did damage with a ton of lures, but his two main ones were an Outkast Tackle Feider Fly hair jig and a Gajo Baits Spirit Shad on a drop-shot.

9. Justin Cooper doesn’t do finesse, and he sure didn’t this week. He put a “big boy rod” in his hands and dragged a Carolina-rigged V&M J-Bug (green pumpkin) on a 3/0 Owner Rig-N-Hook behind a ¾-ounce Rougarou Tackle tungsten weight on 16-pound Sunline Shooter for all his weight.

10. Lost fish were a problem for Aaron Britt, but even they couldn’t stop him from securing a Top 10 finish. He caught most his fish on a 1/4- or 3/8-ounce Wicked Weights tungsten weight drop-shot tipped with a Berkley PowerBait MaxScent Flat Worm. He threw it on his signature 7-foot, 4-inch iRod Genesis spinning rod rigged with 20-pound Seaguar Smackdown Braid to an 8-pound Seaguar Tatsu leader.