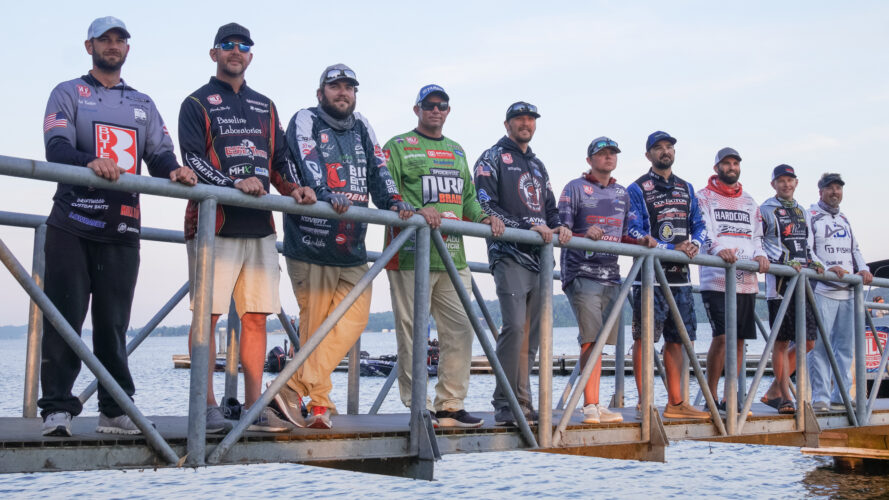 GUNTERSVILLE, Ala. — Lake Guntersville produced big bags all week at the Tackle Warehouse Pro Circuit B&W Trailer Hitches Stop 4 with some anglers boating in excess of 80 pounds during competition. However, big bass weren’t always easy to find. Anglers often found themselves sifting through a sea of 2-pounders or white bass to catch a kicker; and the patterns that succeeded were sometimes a matter of chance.

Here’s how the week’s Top 10 managed to stay in contention until the final day.

1. Nick LeBrun took home his first Pro Circuit championship by targeting an offshore school he found on the final hour of practice near mid-lake.

“I decided to go out there and idle and I just happened to pick the right little 100-yard stretch to look at and man it worked out,” LeBrun said. “I saw what was there and that was a big confidence-builder. After that it was just a way of finding a way to catch them.”

Though he would occasionally duck into the shallows to sight fish for bed fish and let the location cool down, LeBrun says his best fish came from the offshore ledge by slinging a 10.5-inch V&M J-Mag worm.

“These Tennessee River fish eat it,” LeBrun said. “This is really the only place I throw that worm. We catch them on the V&M Wild Thang back where I live but we don’t throw the straight worms. I really don’t like throwing it, but it looks good in the mouth of a four-pounder.”

2. Nick Hatfield was the last man on the hot seat on Championship Sunday and just narrowly missed his first Pro Circuit win. While most of the field was running waypoints all over the lake, Hatfield was puttering around within sight of Lake Guntersville State Park. The idea was clearly a successful one, as the East Tennessee angler was able to boat about 82 pounds in four days. He leaned on a 6-inch Nicholes Lures Ben Parker Mini Magnum Spoon and a Neko Rig with a 10.5-inch Zoom Mag Finesse worm to deal his damage — all while burning what he said was less than 1/4 tank of gas per day.

3. Michael Neal switched his gameplay up around 1 p.m. on Day 1. Until that point, he had about 12 pounds in the boat. In an hour, he had 22 pounds. The difference? Neal noticed a pattern targeting fish from 5-10 feet deep in grass.

“Until then, I was going to fish stretches,” Neal said.

He ended up spending much of the event locating structure in the grass and running from spot to spot, at one point running an estimated 70 miles between each. Neal found success both near shore and offshore at the same depths using a pair of Z-Man Chatterbait Jack Hammers.

4. Bobby Lane spent plenty of time running, but rarely strayed from the shallows. Lane planned to fish for spawning bass before the event, but a turn in the weather changed his tactics. Instead of targeting spawners, he spent most of the tournament sight fishing bream beds for transition bass busting bream. Lane used a pair of Berkley General wacky rigs to plop his bait in front of bass navigating shallow coves.

5. Josh Butler hit the ledges hard looking for scattered fish at depth. He said his best success came from a drop shot using a 4-inch, “morning dawn” Roboworm on a 3/16-ounce weight.

“I just grinded it out,” Butler said. “It was never that great. The fish were scattered with lack of current, so I had to finesse them.”

Butler said on average he caught 12-15 keepers per day and maybe 20 on Championship Sunday.

6. Jacob Wall covered a ton of water from South Sauty to Honeycomb, relying on his graphs to find scattered fish. After starting the tournament with a Strike King 10XD, Wall shifted to a 6XD in order to present a more subtle bait.

“I did weigh probably four fish out of the 20 that I caught from shallow areas,” Wall said. “Those were around bluegill beds and came on a wacky rig. Everything else came out deep. I was targeting shell bars, keying in on my knowledge of the lake, graphing everything that I knew.”

7. Spencer Shuffield found a mega school during practice and leaned on it each morning. Each morning for three days, the school put him in first place using just two baits. On Championship Sunday, the Arkansas angler lost a kicker on the spot before it shut down, sending him searching for fish upriver. Shuffield wasn’t able to locate enough of those fish to pull off the win, but he did provide quite a show using the new Hardcore 7+ and 5+ crankbaits set to debut at ICAST this year.

“This was the biggest question mark on the schedule for me,” Shuffield said. “This is when I fished my very first pro event and I had a good tournament. I see why so many guys are living here. This is a fish factory. The only place I can compare it to is Lake Champlain. This place is full of fish and full of grass. It’s an amazing fishery.”

8. Ron Nelson and Bobby Lane shared many of the same bream beds throughout the event, rotating between target areas. The bite came late in the shallows, though, often turning on around 10:30 a.m. Nelson used a green pumpkin Senko on a wacky rig to great effect, landing in the Top 10 with a nice payday.

9. Brandon Mosley said he was unable to ever nail a specific pattern, but instead fished a textbook Tennessee River ledge school located on single high spot.

“The whole area I caught most of them on for the last three days was a 25-foot circle,” Mosley said. “They were scattered in that little area with a lack of current. Some were up on the current side on that high spot, some were in the trough.”

He was using a shad-colored Jackall MC60/MR crankbait and a green pumpkin Neko Rig with a Daiwa Yamamoto Neko Fat Worm.

10. Lane Olson ran from takeoff at Lake Guntersville State Park to the dam on Day 1, scooping up about 16 pounds with a Strike King 6XD, a True Bass Shuttlecock hair jig and an 8-inch Nichols Lures Ben Parker Magnum Spoon. On Day 2, Olson settled into a rhythm over a big school that put nearly 27 pounds in the boat. He went back to that well twice. On Day 3 he caught enough to make the cut. On Championship Sunday, eelgrass moved in and completely shut him down.

“I knew I was toast after that,” Olson said. “They were still there, but I couldn’t get through the grass. They were only there in the mornings, and I couldn’t find them after.”