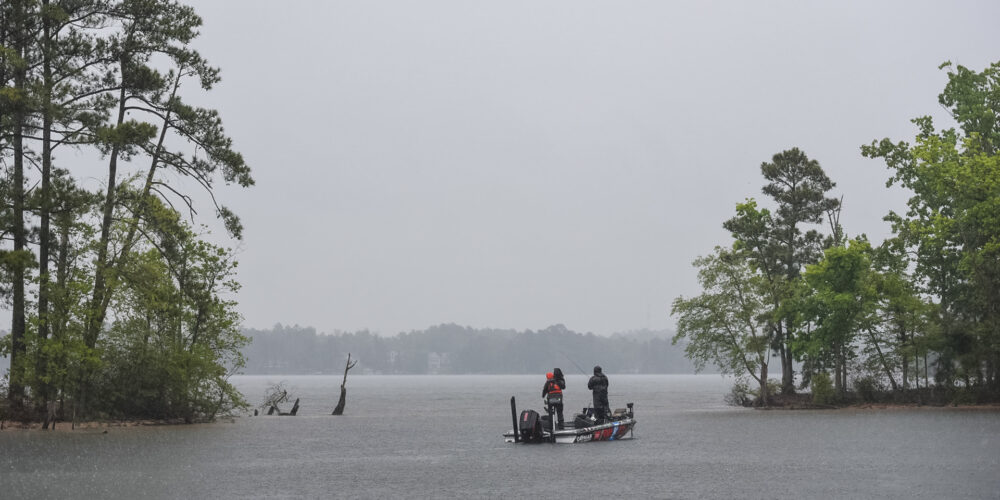 Today was all about survival. Tomorrow, it’s about trying to catch Matt Becker.

While the forecasted storms didn’t quite live up to the billing on Day 3 of the Tackle Warehouse Pro Circuit Presented by Bad Boy Mowers event on Lake Murray, they still did serious damage to the fishing.  Almost every top angler either caught their fish early or simply didn’t catch them at all, as the fishing shut off completely once the rain started.

Tomorrow is looking downright gorgeous. So, the question becomes can anyone use the pretty day to take down Becker’s 7-pound-plus lead?

Count Derrick Snavely among the ones most impacted by the weather, which makes it all the more incredible he’s still in second.

He had been “flip-flopping between a worm pattern and herring-spawn pattern,” starting with the worm pattern, which had produced to big ones each of the last two days. But with the weather forecast and the pressure his herring-spawn pattern was getting, he opted to start and camp on the herring pattern. The result was only four bites and four fish.

“It was a miserable day,” says Snavely. “The weather hurt me tremendously. And I got in a bad rotation. So, I caught one 4-pounder early, but it was just a struggle.”

Snavely says he badly needs the sun to make his herring bite go, but with the clouds, the fish simply never cooperated.

“Yesterday, I could see them, and if they weren’t over 3 pounds I’d pull it away from them because I didn’t want to burn through them,” says Snavely. “They definitely weren’t doing that today, but hopefully they will tomorrow when the sun comes back.”

At some point, Michael Neal is going to win a major event. Will this finally be his time? Well, he put himself in contention for that – and his first win since three BFL victories in 2011 – thanks to a strong morning today.

“I started out on a herring deal throwing a soft-plastic jerkbait,” says Neal. “I had one point that every time I’d go there I’d catch a good one. But I’d have to leave and come back. I never caught two at one time. But I caught 18 pounds off it.”

After that, he made a run up the Little Saluda, where he upgraded by 4 pounds yesterday. Unfortunately, he only managed one minor upgrade today before the weather rolled in and wrecked things.

“I have some decision making to do tomorrow,” says Neal.

Then again, considering he’s changed tactics almost every day, from fishing docks on Day 1 to the river being key yesterday to the herring focus today, he says he’s ready for whatever transpires.

If there is anyone Becker may be worried about most, it’s Anthony Gagliardi. After all, he was the obvious pre-tournament favorite thanks to being a local who has won more than once at the top level on Murray.

Then again, Gagliardi admits he’s surprised he’s done as well as he has this week.

“I keep telling people, I don’t fish here much during this time of the year,” says the 2014 FLW Cup champion. “I have a handful of spots I’ve caught them before, but they weren’t there in practice. So, I just went practicing like everyone else.”

Hence why he started Day 1 sight fishing. But eventually, he made the switch to the herring spawn, and his weights have kept going up, with today being his best day all week.

“I had a good day today,” says Gagliardi. “I caught more than 20 some fish, and I lost a legit 6 just as the rain started. But as soon as the rain quit I caught fish on my last five casts of the day. They just didn’t like that rain.”

Having already won a Pro Circuit event this season (on Okeechobee), Skeet Reese has a shot at a second thanks to something he figured out the first day of the event.

“I started the tournament junk fishing, but I got dialed into a bite late the first day that has carried me through to today,” says Reese.

While he’ll keep the specifics to himself for now, he did say it involves pitching a drop-shot to docks with a Berkley PowerBait MaxScent Hit Worm. After catching a good one on a glide bait to start today, he culled out four fish before the rain with his dock pattern.

Needless to say, he plans to focus on that the most tomorrow to try and get his second victory.