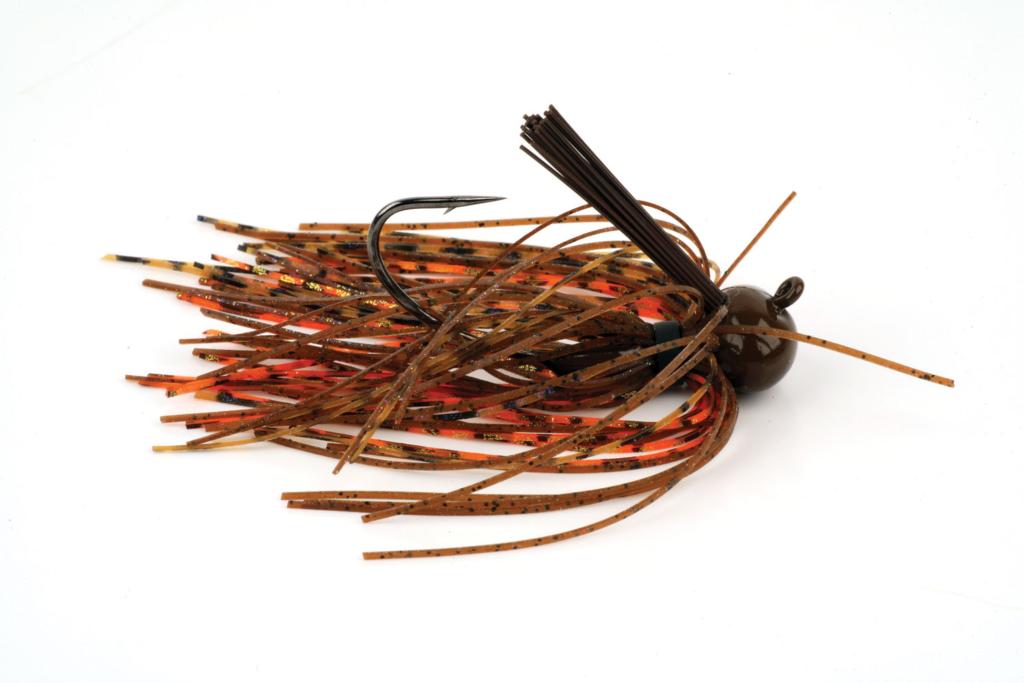 Football-head jigs are finally enjoying the popularity they have deserved for so long. Photo by Jason Sealock.
October 16, 2006 • Mark Hicks • Archives

Some lures are overnight sensations. Take the Chatterbait, for example. After this new lure scored big in several Florida tournaments last spring, Rad Lures was overwhelmed by the demand for it.

At the other extreme are deadly lures that go largely unnoticed for decades before they catch on. The football-head jig falls into this category. It has long maintained a following in the West, in the Ozarks region and with Great Lakes smallmouth anglers. Over the past four or five years, the football-head jig has quietly snuck into the tackle boxes of more and more bass pros across the country. It may be the least-hyped lure ever to become a major player.

It's easy to understand why the football jig has stayed on the backburner so long. The wide, sideways head grabs grass like an anchor, and the jig readily snags wood. Since the typical weed-guard jig

slithers through cover, the football head appears to be a lousy design.

However, when it comes to fishing clean, hard, offshore structure, the football jig is in a class by itself. Curt McGuire of Lawrenceburg, Tenn., put a 1/2-ounce football-head jig to good use when he fished a Stren Series Central Division tournament on Kentucky Lake in June of 2005. He brought in four limits of largemouths that weighed from 14 pounds, 12 ounces, to 18 pounds, 8 ounces, and finished in second place.

McGuire claims he caught 80 percent of his bass on the football jig.

"I fished ledges at Kentucky Lake that were 12 to 15 feet deep on top," McGuire said. "I got most of my bites after the jig fell off the edge of the drops. The bass were too deep for most crankbaits."

Some of McGuire's bites came as deep as 27 feet. Though he had found several offshore structures that were holding bass, a ridge about 40 yards wide produced most of his fish on the first two days of 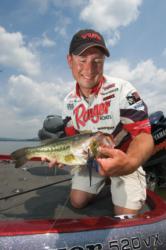 the event. During the tournament, McGuire had to fish and refish a 100-yard stretch of the ridge to stay in touch with the bass.

"Whenever I found the bass, I'd catch up to six of them as fast as I could throw in there," McGuire said. "They'd usually be on a stump, rock, or a piece of brush. You needed to hit the cover with the jig."

McGuire began experimenting with the football jig four years ago after he noticed that more of his competitors were using it. Now he throws the 1/2- and 3/4-ounce sizes anytime he fishes more than 12 feet deep on points, ledges and humps. The football jig produces for him in the summer, fall and winter. He uses the same tackle and retrieves despite the season, though he slows down during the cold months.

In stained water, McGuire opts for a black Booyah football jig with a hand-tied black and blue skirt. He fishes a black and brown jig in stained and clear water, and a green-pumpkin jig in clear water. Whatever the jig's color, he dresses it with a 3.75-inch YUM green-pumpkin Craw Papi, which features flailing pincers.

A 7 1/2-foot flipping rod serves up McGuire's football jigs. He matches the rod with 12-pound fluorocarbon and a high-speed baitcasting reel. The long, stiff rod quickly takes up slack during the hookset, and the low-stretch fluorocarbon line ensures the barb buries with authority. Since fluorocarbon sinks, it doesn't bow as much as other lines, which lets the jig sink faster. The fast sink rate sparks reflex strikes. McGuire never uses more than 14-pound-test because heavier line slows the jig's fall too much. 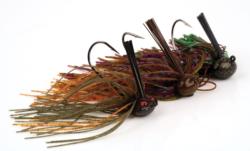 McGuire's basic football-jig retrieve consists of quick, short hops. He starts with his rod tip at 10 o'clock and hops the jig three times as he works the rod to 12 o'clock. Then he quickly drops the rod tip to 10 o'clock while taking up the slack and repeats this process.

"Small hops keep the jig close to the bottom and keep me in touch with the bait so I can feel bites better," McGuire says. "Sometimes the bites are extremely subtle."

When the jig falls off the edge of a drop, McGuire lets it sink all the way to the bottom before he continues his retrieve. He always makes bottom contact after every hop. If McGuire thinks bass are suspended above the bottom, he snaps the jig off the bottom 3 feet at a pop. This rips the bait up where bass can see it. When the jig plummets down, bass strike reflexively.

Hopping a football jig is the last thing you'll ever see Frank Divis Sr. doing. He fishes a football jig one way and one way only: He drags it on the bottom.

Divis, a Fayetteville, Ark., angler, has been fishing FLW Outdoors tournaments as a co-angler since day one and competes in Wal-Mart FLW Series and Stren Series events. He has pocketed more than $100,000, and most of that money has been won with a football jig. He has made thousands of football jigs at home.

It's always a 3/4-ounce jig. Divis dotes on the football jig made by PJ's Finesse Baits of Fayetteville because it features a 5/0 wide-gap Gamakatsu hook, a bulky hand-tied skirt, durable paint, and a soft weed guard for better hookups.

Divis always dresses the jig with an unskirted 4-inch twin-tail grub, such as the one made by Zoom or YUM's Muy Grub. A brown and purple jig with a cinnamon-purple twin tail, and a green-pumpkin with red-flake jig and a green-pumpkin twin tail are his main colors. Divis claims these combinations are the best crawfish imitations ever.

"A constant bottom-dragging retrieve is the key to fishing a football-head jig," Divis said. "I fish it like a crankbait so that a bass has to strike before the jig gets away. I never stop moving the bait because I don't want the bass to get a good look at it."

The retrieve speed should be varied to match the mood of the bass, but it must never be so fast that it pulls the jig off the bottom. This presentation pays off for Divis from May through November when he fishes offshore structure from 20 to 35 feet deep. The best structures have rock, gravel, sand or shell bottoms, and these are often found along creek and river channels. Many bites happen when Divis drags the jig off the edge of a drop.

A sensitive 7-foot extra-heavy graphite baitcasting rod and 15-pound fluorocarbon line allow Divis to feel the football jig crawl over every rock, shell and pebble. When he feels the jig hit a rock or stump, he pops the bait up 2 feet and lets it drop back to the bottom. "That's what a crawfish does when he's trying to get away. When you do that, bass jump all over the jig."

Bass often hit hard enough to knock slack in the line when Divis jumps the jig over a piece of cover. But, the strikes can be very light when he's dragging the jig. He describes it as a "mushy feeling" or "weightless" feeling.

Many anglers fish Carolina rigs in the same types of places that Divis fishes with a football jig. When his pro partners throw Carolina rigs in front of him, Divis claimed he usually outfishes them two to one, whether they are fishing for largemouth, smallmouth or spotted bass. "And, I'll catch bigger bass with a football-head jig," Divis said. "I've caught bass up to 10 pounds with it."

Divis can entertain you all day with stories of how he has put the whammy on renowned bass pros with a football jig. One pro who doesn't mind admitting this is Steve Kennedy of Auburn, Ala. Kennedy has fished the FLW Tour since 2002 and has two tour wins. Divis drew out with Kennedy on the third day of a Stren Series Central Division tournament on Kentucky Lake in early June of 2004.

Kennedy pulled up to one of his structure spots and began casting a Norman DD22. Divis followed suit and they both managed to put a keeper bass into their livewells. Then Divis switched to his football jig and limited out in 30 minutes with nearly 14 pounds. Kennedy was still fishing for his second bite with the crankbait.

"I handed Steve one of my football-head jigs and gave him a quick lesson on how to fish it," Divis says. "He threw it out and immediately caught a bass on it. You should have seen the grin on his face."

That day Kennedy weighed in a strong limit of bass he caught on a football-head jig. He finished the tournament in sixth place while Divis won the Co-angler Division.

Kennedy's best showing with a football-head jig came in late spring of 2006, however, when the FLW Tour made its fifth stop of the season on Kentucky Lake. Though some pros did well by catching bass from shallow bushes, Kennedy won the event by dragging a football jig on offshore ledges. He caught a limit each day of the event, the smallest of which weighed 14 pounds, 8 ounces, and the largest, caught on the final day, weighed 21 pounds, 6 ounces. 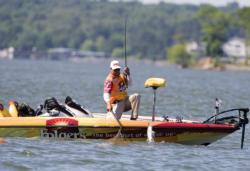 What Kennedy likes best about the football jig is that he can fish it almost as fast as a crankbait and it stays in contact with the bottom throughout the retrieve. He has his best luck with the jig when it bumps along over clean, hard bottoms covered with gravel or mussel shells.

"My wife calls places like that `tickle bottom'," Kennedy said. "When you feel that, prepare to get thumped."

When fishing a football-head jig, or any other bottom bait, you need a good sense of feel to detect light bites. Curt McGuire helps his cause by cupping the reel with his rod hand and placing his thumb on the line above the reel's line guide.

"I didn't do this intentionally," McGuire says. "My thumb just found its way there by itself. It's comfortable, and it definitely helps me feel more bites."