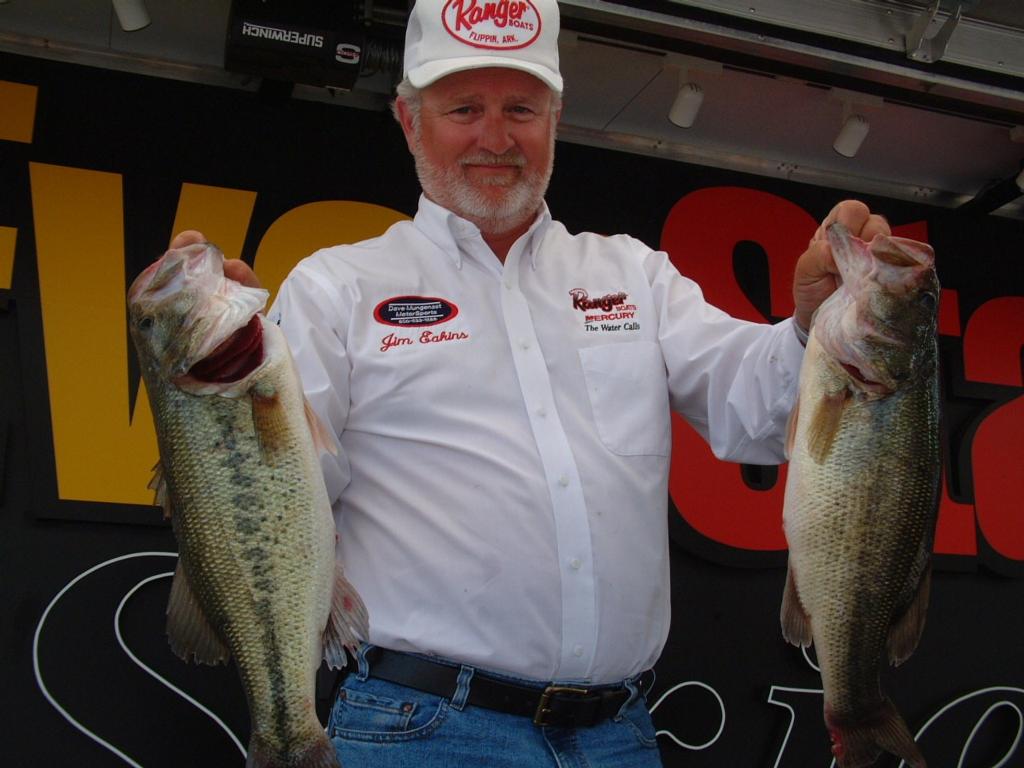 GILBERTSVILLE, Ky. – Jim Eakins of Nixa, Mo., used an 18-pound, 1-ounce stringer to capture the overall lead in the Pro Division after day one of competition and continue his string of impressive performances on the EverStart Central Division tour. Eakins, fishing in only his fourth EverStart tournament of his career, already has two top-10 finishes to his credit – registering fourth place at the 1999 EverStart tour event on Lake of the Ozarks and eighth place at Sam Rayburn this past April.

So, is Eakins prepared to make it three out of our four?

“I don’t know about that. It’s just day one and there are a lot of things going to happen yet,” said Eakins. “The whole deal is to make it into the top 30. And so far, everything is working out. I’ve caught somewhere between 15 and 20 pounds each of the last three days (including practice). But I’m never confident. Too much can happen in these next few days.”

Eakins said that he plans on fishing conservatively tomorrow. However, he acknowledged that he can’t be too careful.

“I think (a two-day total of) 22 pounds should be enough to make the top 30 tomorrow. The deal is that you don’t want to burn out too many of your fish,” said Eakins, who plans on fishing in shallow waters – five feet or less – the entire tournament. “I’ll go out there and catch what I can early and then I’ll ease up a bit. But it’s a gamble. You never know exactly what weight is going to make the cut.”

Todd Ratcliff of Bailey, Miss., won the Big Bass award in the Pro Division after landing a 5-pound, 9-ounce bass. Ratcliff, who is currently in 19th place, won $750 for his efforts.

`Do or die’ proposition for Phillips pays dividends

If fishing a big-money tournament wasn’t enough pressure for Tyrone Phillips, his wife made sure to give him a little extra incentive to fish well as well as possible this week.

“I was really nervous coming into this tournament,” said Phillips, who grabbed the top spot in the Co-Angler Division after the first day of competition with an impressive catch of 14 pounds, 14 ounces. “My wife told me that if I didn’t do well here, she wasn’t going to let me fish the EverStart trail anymore. Like I told my partner today, it’s `Do or die’ for me.”

Phillips, a native of Little Rock, Ark., decided he had no choice but to summon all of his angling experience and fishing mojo in a desperate effort to keep his EverStart dreams alive.

And so far, it looks like it’s paying off.

“I told myself I’m not giving up,” said Phillips defiantly. “It’s something I love to do. I could fish 24 hours a day, 7 days a week. I just live for these tournaments.”

Although Phillips is in the driver’s seat heading into tomorrow’s second round of competition, he has no plans of letting up on the gas pedal.

Phillips, who caught four fish by 9:30 a.m. and a limit by 1 p.m., said he is happy with his performance so far given the added pressure.

“It feels great. Like I said, there is a lot of pressure on me now. But so far, everything is working out,” said Phillips, who finished 14th overall in the 2000 EverStart Central Division point standings. “I just hope I keep doing well. If I do, maybe I can pick up some sponsors. That would really help me out.”

Johnson also won the $250 Big Bass award for catching the largest fish in the Co-Angler Division – a 5-pound, 10-ounce bass.

Tomorrow’s takeoff is scheduled to take place at 6 a.m. at Moors Resort located on Moors Camp Road in Gilbertsville, Ky.