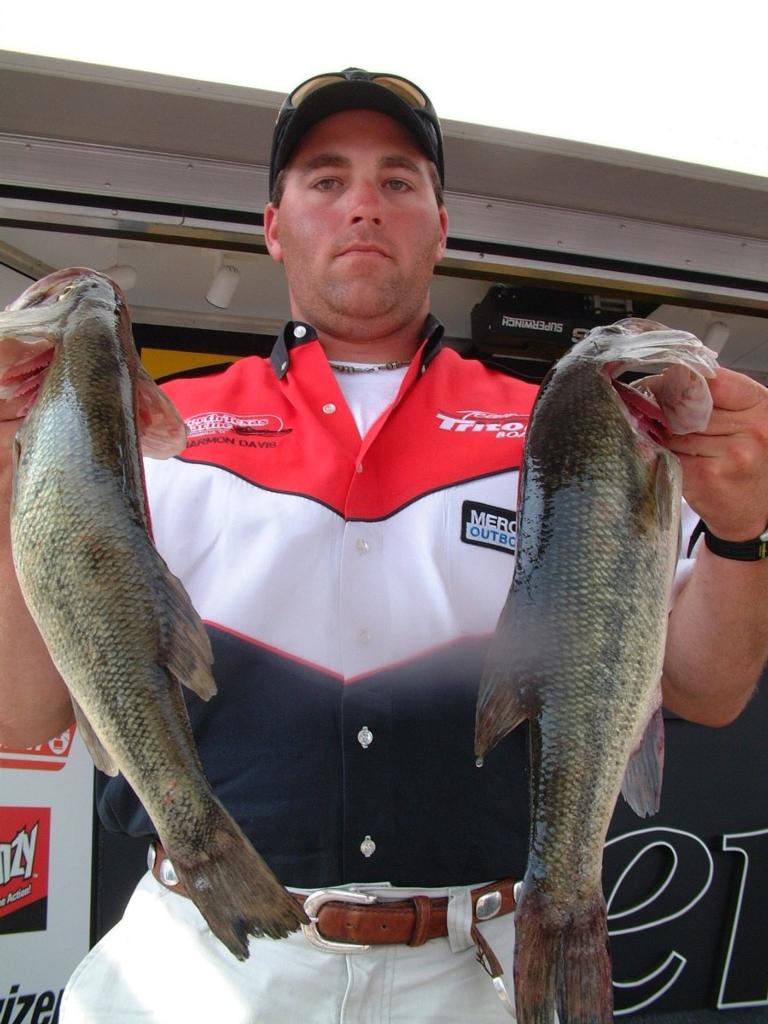 Fends off best friend McCall on route to victory

GREENVILLE, Miss. – Harmon Davis picked up right where he left off in the semifinals – in first place. Using a catch of 12 pounds, 1 ounce, Davis captured the EverStart Central Division title on Lake Ferguson and walked away with a brand new Ranger boat and $15,000 in cash. Not surprisingly, Davis was gushing with joy over his performance.

“It’s unbelievable. It really is,” said Davis, a native of Marlow, Okla. “I just wish my kids were here to see it.”

Although Davis won the title, he said he didn’t think much of his chances earlier in the week.

“When I first got here, I wasn’t catching anything. In fact, the first few days of practice, I didn’t even get a bite,” he said. “But then I found a little spot and it kept producing. Basically, I fished around two or three trees all week. And that’s where I caught all of my big fish.”

Davis, who has now registered two top-10 performances on the EverStart circuit, said that the fishing was tough all week.

“The bite was the softest I have ever seen it,” said Davis, who flipped a Junebug brush hog throughout most of the tournament. “Once you had your line in the water, if it felt like a fish, it was already too late to hook it. You really had to stay mentally focused all week.”

Although Davis fished with his good friend and tournament runner-up Chris McCall throughout most of the week, he decided to finally split up just before the finals.

“The day we split up, I went in a little flat and I happened to hit it just at the right time,” said Davis. “The fish were only biting for about 30 minutes to an hour each day, so you had to be there at the right time. Like I said, I caught most of my big fish in that area. And today, I just told myself that I was going to live or die by that spot. (McCall) called it my `magic tree.'”

Davis, who now leads the EverStart Central Division overall point race, said he hopes his luck at the “magic tree” will have a hand in propelling him to the next level.

“If I finish in the top 10 for the year, I will qualify for the FLW tournament trail,” he said. “That’s my ultimate goal.”

Chris McCall of Jasper, Texas, was standing on the podium in first place with only one angler standing between him and victory. Unfortunately or fortunately, depending on how you look at it, the one remaining angler happened to be Davis, McCall’s best friend and traveling partner. As luck would have it, Davis turned in just enough fish to beat him.

“It’s really bittersweet in a lot of ways. I had a 4-pound bass on the line at about 1:45 p.m., but it got off. That would have been enough to win it,” said McCall, who landed a total catch of 10 pounds, 13 ounces. “I really wanted to win this tournament, but if I was going to to lose, I’m glad I lost to Davis.”

According to McCall, the two have been virtually inseparable throughout the EverStart Series circuit.

“We travel together, we work together, we practice together and we’re roommates on the road,” said McCall, who took home a check for $10,000. “I’m happy for him. Maybe it will be my turn next.”

Adam Wright of Benton, Ark., finished in third place after recording a catch of 10 pounds, 1 ounce.

Bill Smith of Prestonsburg, Ky., finished in fourth place with a catch of 8 pounds, 14 ounces. Despite finishing out of the top three places, Smith said he was happy with his overall performance.

“This week I got really lucky,” said Smith, who took home a check for $8,000. “I only got to practice on Lake Ferguson for about an hour, so overall, I think I did pretty well. I lucked into a good pattern on the first day and that’s the only reason I got as far as I did. I’m happy.”

“I had a great week,” said Newby. “I didn’t lose a fish all week until today. You always have to have some luck to get all of your fish in the boat. It just wasn’t my day, I guess.”

The next and final EverStart Central Division tour event of the season is scheduled to take place at Fort Gibson Lake in Wagoner, Okla., from Sept. 19-22.