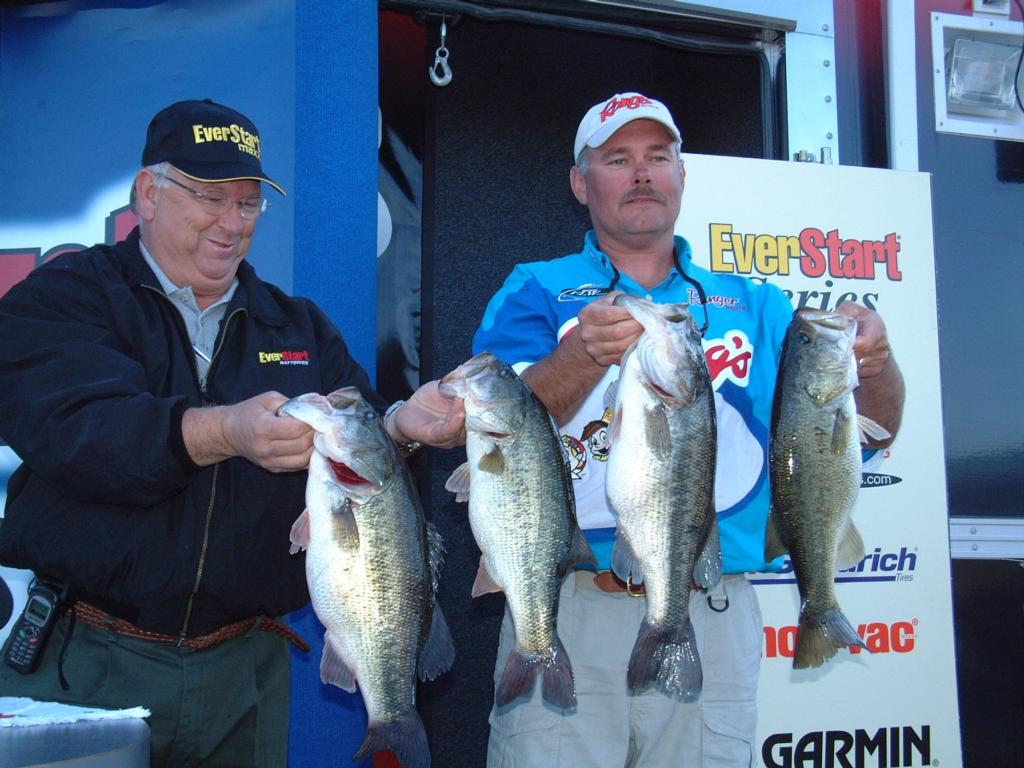 JASPER, Texas – To put it mildly, Jim Tutt took command of the pro field Friday in the EverStart Series Central Division tournament at Sam Rayburn Reservoir. He caught the tournament’s heaviest five-bass stringer to date with a massive one-day weight of 23 pounds, 7 ounces, soundly defeating Tim Carroll of Owasso, Texas, who led the first two days and who caught 15-7 to place second today.

So what’s Tutt so unhappy about?

“I don’t like it,” Tutt said about leading today. “I was leading at Beaver and I don’t like that. It’s a lot of pressure.”

What he’s talking about is a 2000 EverStart Central Division tournament at Beaver Lake, Ark. There he fished well over the first two days and led the pro field going into the semifinal round. That third day, however, he decided to switch baits from the tube he’d been having success with to a Carolina rig that his co-angler was using. The decision cost him a ticket into the finals and he finished that tourney in 16th place.

It was a mental lapse that Tutt is determined not to repeat – especially not this week. While he lives two hours away, many consider Sam Rayburn to be Tutt’s home lake and he was one of the favorites coming into this event. He has won an EverStart event before, at Lake of the Ozarks, Mo., in 1999.

“I know the lake pretty well, though not as well as some of the other guys,” said the Kellogg’s-sponsored pro from Longview, Texas. “I really want to win this one. I’m feeling great, man. It’s been a great start.”

He’s not kidding. Fresh off a strong 8th-place finish at January’s FLW tournament at Lake Okeechobee, Fla., Tutt found the zone again today when the rest of the field struggled to locate the big Sam Rayburn largemouths. While they weren’t weighed individually, Tutt estimated that four of the bass he caught weighed around 7, 5, 4 and 4 pounds, respectively. And he also lost one around 7 pounds. That was all by 9:30 this morning.

“I was just one of those days where everything goes right,” he said. “I’m in an area with a lot of nice fish and hopefully, hopefully I can catch them again tomorrow.”

Tutt’s approach may have been what set him apart from the rest of the field today. He’s fishing a 500-yard stretch of hydrilla in the mid-lake region of Sam Rayburn using an orange Rat-L-Trap. While that’s not much different from what many anglers are doing here, Tutt is doing it deeper and slower.

“I’m fishing a little bit deeper than the other guys are, I think,” he explained. “I’m trying to target the pre-spawn females.”

A lot of anglers came to Sam Rayburn this week hoping to feast on big female bass as they moved to shallower water to spawn. But the nasty cold front that moved through the area early in the week mostly kept the bigger bass to deeper water, leaving anglers with smaller males in the shallows. What Tutt has done, especially the last two days, is go down and get the females.

“He’s dialed in on them in such a specific strike zone that, if he wanted to, he could catch every one of them,” said Gerald Andrews, Tutt’s co-angler partner Friday. “But he was great, he let me catch a couple today.”

“I’m not focusing on catching 50 or 60 little ones; I try to focus on the big, quality bass,” Tutt said. “A lot of guys might start on a top-water bait and go for a limit first, then they switch baits and go for the big ones. I just decided to go for the big ones right away. … I’ve been working hard out there.”

Carroll, who caught four bass and had another stellar day despite Tutt’s standout stringer, is hoping the arrival of sun and warmer weather today will be a boon to him tomorrow as he takes a different approach than the leader.

“My area’s had a lot of pressure, but I think (the sun) is going to play into my game,” he said. “I’m probably going to fish shallower.”

But he added that Tutt’s 23-pound catch puts a psychological twist on the final round since everybody else has had trouble just catching a limit.

“I knew that Tutt would do that,” Carroll said. “These guys on this lake are good. It was just a matter of time. If you let them move around for four days straight, they’re going to figure something out.”

As for Tutt himself, he will have his own psychological battle Saturday: He’s in the lead. Can he hold on for one more day?

“I could zero just as easily as I could catch a big sack,” he said. “But I learned from Beaver Lake that you’ve got to stick to your guns and not get sidetracked.”

Co-angler leader in the same boat

It’s no accident that Gerald Andrews led the Co-angler Division with just two bass today. He fished with Tutt, and those two bass weighed a combined 10 pounds, 5 ounces.

And it’s no surprise that Andrews is thrilled to be paired with Tutt again tomorrow. In fact, the two fishermen have become a team of sorts this week. Tomorrow will be the third day this week that they fish together. By mere providence and by way of results, they have been paired up for Wednesday, Friday and Saturday. So they’re kind of getting used to each other.

“I’ve had to put up with Jim Tutt for two days,” Andrews said, laughing. “But I guess he and I have hit it off pretty well.”

Truth be told, Andrews is extremely grateful for what has amounted to a four-day guided trip on Sam Rayburn.

“The reason I came down here was because I’ve never really fished a lake with grass in it,” said the native of Benton, Ky. “(Tutt) has taught me a lot about grass fishing over the last few days. Today, he even quit fishing to try and help me catch a third fish.”

And the prospect of returning to Tutt’s big-fish location for the finals has Andrews licking his chops. “I know he’s on fish. I’m just happy to be where I am right now. The thing is, it’s an area where one fish might be enough to do it for me.”

Saturday’s final-round action begins at 7 a.m. at Twin Dikes Marina in Brookfield, Texas. The 10 competitors in each division will restart the day with zero weight and fish in a one-day shootout to determine the winners. The final weigh-in will be held at the Wal-Mart Supercenter located at 800 West Gibson in Jasper starting at 4 p.m.