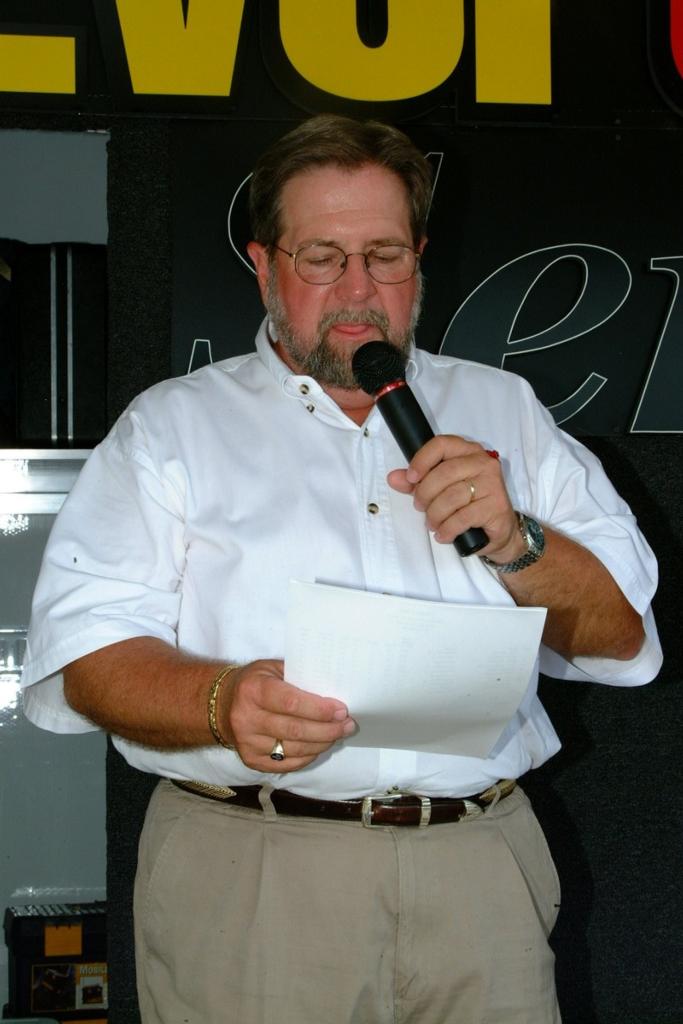 Tournament director Jerry Stakely informs the crowd that an official announcement of the pro and co-angler champions won't be made until all of the merits of a protest can be properly evaluated. Photo by Gary Mortenson.
June 29, 2002 • Gary Mortenson • Toyota Series

RED WING, Minn. – In a strange twist to an otherwise uneventful afternoon, tournament officials acknowledged that a formal protest filed against apparent champions – pro angler Dave Lefebre of Erie, Penn., and co-angler Paul Strege of Woodbury, Minn. – would temporarily prevent an official acknowledgement of the winners as well as the second-place finishers in the opening Northern Division tournament of the 2002 season.

“We’re working to get this resolved as quickly as possible,” said EverStart tournament director Jerry Stakely.

According to tournament officials, the issue centers around a possible violation of safety regulations per tournament rules. Specifically in question is whether or not Lefebre had properly attached his ignition shut off device to his person as tournament rules mandate. The rationale behind the regulation is that anglers who do not have their ignition shut off device properly attached can jeopardize their own safety as well as the safety of their co-angler should an accident occur, such as an angler falling out of a boat. Once the ignition shutdown device is pulled, manually or as a result of an angler falling overboard, the boat motor automatically turns off.

Although it was unclear when the protest would be resolved, an announcement could come as early as this evening or potentially as late as Tuesday or Wednesday. FLWOutdoors.com will provide complete coverage when the official results are announced.

Editor’s note: Official results will not be posted on FLWOutdoors.com until the outcome of the protest has been decided.