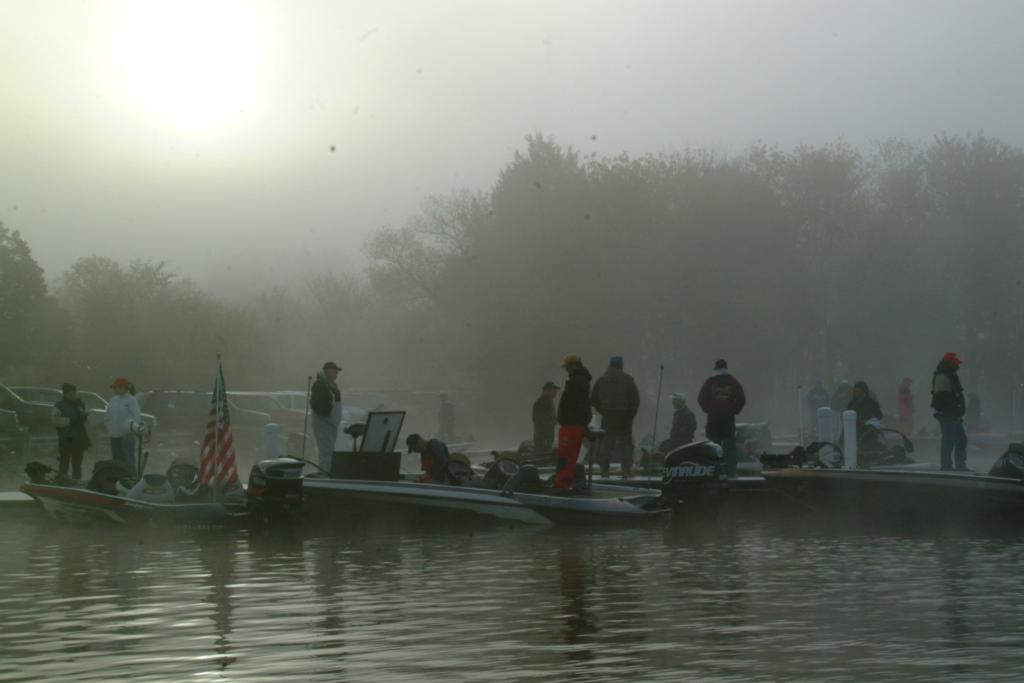 The sun rises, but fails to burn off the morning fog at Old Hickory Lake as anxious EverStart anglers wait around for the start of the 2003 championship. Photo by Jeff Schroeder.
October 29, 2003 • Jeff Schroeder • Toyota Series

GALLATIN, Tenn. – A stubborn fog delayed the start of the 2003 EverStart Series Championship for over an hour and a half Wednesday morning, leaving the 298 pros and co-anglers competing this week time to tie on extra lures, dream of the tourney’s $335,000 purse and contemplate a tough, fall bass bite on Old Hickory Lake outside of Nashville.

Many anglers, too, were thinking of Connie Stakely, wife of EverStart Series tournament director Jerry Stakely, who passed away Tuesday at the age of 52 following a three-year battle against cancer.

There were a lot of heads shaking and shoulders shrugging at the Bull Creek Marina dock this morning by anglers who had a difficult time catching keeper bass in practice and knew the prospects looked a little bleak for competition.

A distinct fall pattern hasn’t really emerged for anglers so far, and, consequently, they have reported catching bass on a wide array of lures like jigs, spinner baits and Senkos. One thing seems consistent, however: They are having to fish for them in shallow water.

“It seems like they’re just deciding to bite what’s in front of them from time to time no matter what it is,” said pro Randy Ramsey of Battle Creek, Mich. “But it’s not very often.”

Sprinkle in the frustrating fog delay and it’s easy to see how fishing expectations dropped considerably as the morning went on. Takeoff was scheduled for 7 a.m., but the last boat didn’t leave the marina until 8:45 or so.

“It’s been like this the last few days,” said co-angler Eric Struif of Lake Villa, Ill. “The weird thing is that it’s actually clearer before the sun comes up.”

For more than a few anglers, the fishing was the least of their concerns Wednesday morning. Anglers and staff learned of Connie Stakely’s passing at Tuesday night’s registration meeting, and many hearts were heavy heading into competition.

Jerry and Connie Stakely were the original husband-and-wife tournament-director team to run the EverStart Series, and they had forged many tight friendships in all their years in tournament fishing. As they sought treatment for Connie’s cancer over the last year and a half, their absence from the tour has been palpable.

At last year’s EverStart Championship, pro winner Koby Kreiger of Okeechobee, Fla., dedicated his victory to the Stakelys. Wednesday morning as he prepared to defend his title, Kreiger’s thoughts again turned to the Stakelys.

“We all knew it was coming,” said Kreiger, who also lost his father to cancer. “You try to prepare yourself for it, but you never can. To be here right now trying to go fishing, my mind’s probably not into it as much as it should be because Connie meant so much to me.”

The full field of 149 pros and 149 co-anglers will compete for two days for one of 20 semifinal-round spots. Weights are cleared for Friday’s competition, and co-anglers fish for one day with the winner crowned following Friday’s weigh-in. The top 10 pros based on Friday’s catch weight advance to Saturday’s final round, where weights are again cleared and anglers compete for position and prize money. The EverStart Series Championship will be broadcast to 55 million subscribers of the Outdoor Life Network on the “FLW Outdoors” television program Nov. 8 at 6 p.m. Central time and Nov. 9 at noon Central time. The final weigh-in Nov. 1 will also be broadcast live to Wal-Mart Stores nationwide.

The winning pro is guaranteed $25,000 cash plus an Evinrude- or Yamaha-powered Ranger boat equipped with Garmin electronics, a Minn Kota trolling motor and EverStart batteries. If the winner is an original owner of a Ranger boat, he will receive a $10,000 bonus for a top pro award of $76,900. The winning co-angler is guaranteed $10,000 cash and a fully rigged Ranger boat.