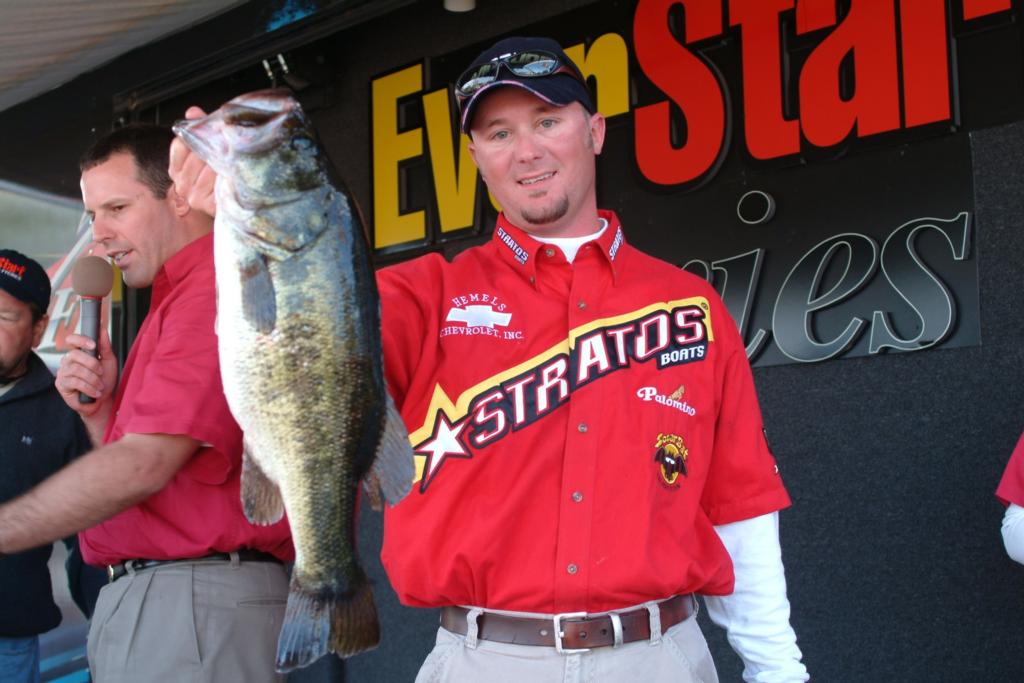 OKEECHOBEE CITY, Fla. – Like the old saying goes, if you don’t like the weather, have a bass tournament and it will change.

For the last two weeks, South Florida has enjoyed postcard-perfect weather. But ever since the registration meeting for the season opening EverStart event Tuesday night, the wind has been howling straight down Highway 441 and across Lake Okeechobee at 15 to 25 mph.

Though it was not necessarily a cold wind, the blustery conditions put a bow in anglers’ lines today and the weights showed. Plenty of limits were weighed in, but the big fish must have taken the day off to fly a kite.

“Considering how bad the wind howled, I had a pretty good day,” said Grigsby, who caught 10 keeper bass total.

His success came on a Venom 8-inch worm.

“I’m using a secret color down here called Junebug,” he joked. “It’s a new color no one has heard of, but trust me, it’s going to be hot.”

Grigsby is pitching the worm in open pockets of eelgrass. He said he had to go to a heavier weight to combat the high wind today.

“The area is an eelgrass bed that is kind of off the beaten path,” he added. “If the wind lays tomorrow, I should be able to catch a few to keep me in the cut.”

Doug Vest and Justin Schwier, both of Okeechobee, Fla., are tied for second with 16 pounds.

“The wind helped me,” he said. “I always do better here in bad weather. When it’s calm and sunny, everybody catches them and that’s when I struggle. But when it’s windy or cold, it can hurt other people’s fishing areas and that’s when I know where to go. I hit about eight or nine different places today.”

Vest was very pleased when the forecast called for 10 to 20 mph winds today.

“I wish it would go down to 20 degrees tonight,” he added. “I’d really like my chances then.” 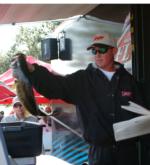 Schwier’s fishing day was a case of good luck disguised as bad luck. He was headed south first thing this morning when he experienced mechanical difficulties and had to return to the ramp for repairs. After losing a couple hours of fishing time, he decided to cut his loses and just fish nearby. Sixteen pounds later, he realized that his early misfortunes were probably a good thing.

“I had planned to pitch and flip all day, but I ended up catching all of my fish on a spinnerbait,” he said.

Schwier’s plan tomorrow is catch a few fish to survive the cut and then head to his original area during the finals.

“Sometimes things work out for the best,” he added. “Maybe there’s a reason I didn’t get to beat up on those fish today.”

Kenney and Blankenship round out top five

Energizer pro J.T. Kenney of Frostburg, Md., continued his roll on Okeechobee today by holding on to fourth place with five bass weighing 15 pounds, 13 ounces. He is fishing in the same area as leader Chad Grigsby.

“It’s typical Florida – it’s more the area than the technique,” he said. “It’s a pretty big place, and other than Chad, there was only one other boat in there today.”

The big bass winner in Pro Division today was Tim Arnold of Cullman, Ala. He landed an 8-pound, 8-ounce monster worth $750. 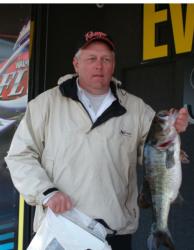 Mike Drain of Purcell, Okla., leads the Co-angler Division with 15 pounds, 2 ounces. He reported catching his limit of bass on a spinnerbait today.

“The wind helped us,” he said. “It had blown baitfish back into this one little area and the bass were in there feeding on them.”

Gerald Smith of Louisville, Ky., is in second place in the Co-angler Division with 12 pounds, 1 ounce.

Rounding out the top five co-anglers are Donald Miller of High Point, N.C., in fourth place with 10 pounds, 13 ounces and Jerry Barnett of Uniontown, Ohio in fifth with 10 pounds, 12 ounces.

Two bass, each weighing 6 pounds, 15 ounces, tied the big bass award in the co-angler division. Co-angler leader Mike Drain caught one and Kenneth Owens of Wise, Va, caught the other.

Tuesday evening many co-anglers figured it would take between 20 and 22 pounds to make the top-20 cut after two days. But the 20th place mark today was 8 pounds, 5 ounces. If fishing does not ramp up substantially tomorrow, 17 pounds could be the cut mark for co-anglers.

The competition resumes tomorrow at 7 a.m. at the Okee-Tantee Recreation Area.