Guntersville cools off, Pugh heats up 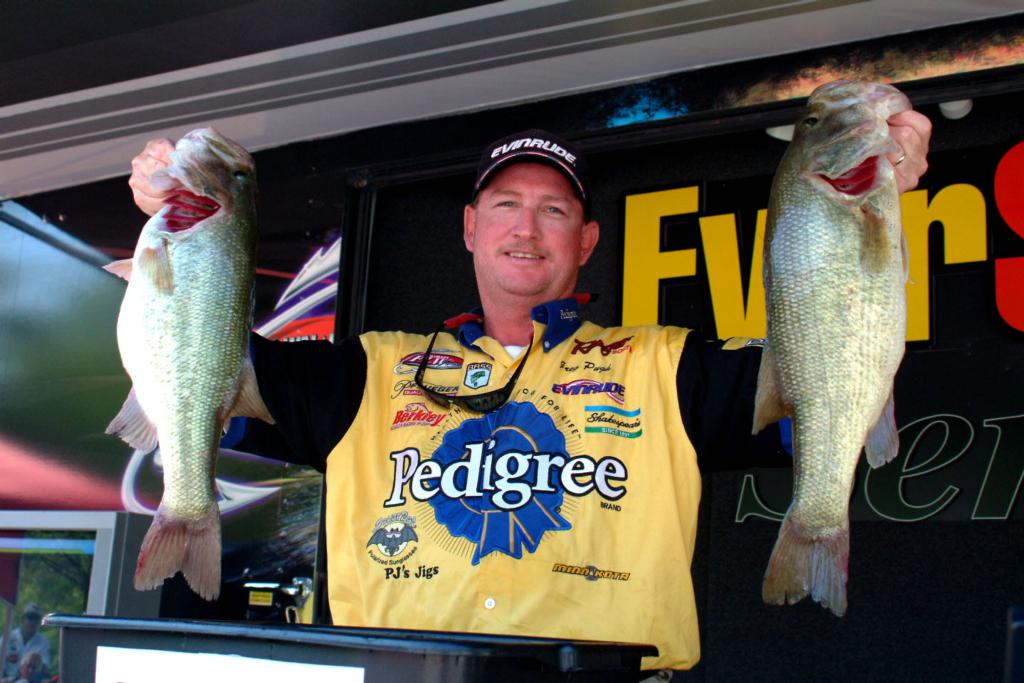 GUNTERSVILLE, Ala. – The red-hot fishing on Guntersville Lake did cool off a bit today, but that did not stop Pedigree pro Greg Pugh of Cullman, Ala., from sacking the biggest limit of the tournament: 24 pounds, 5 ounces.

Deep cranking was the ticket for Pugh today.

“I caught most of them off one deep spot with a cranking plug that runs about 15 feet deep,” he said. “I fished the spot yesterday and never got a bite. I think it’s just a matter of timing. We pulled up at the right time today, right when they started feeding.”

Micah Bennett of Summerville, S.C., is in second place with a two-day total of 38 pounds, 6 ounces.

“I had to go to a spot that I was trying to save for the finals,” Bennett said. “I only caught three off it so I think there will be some there tomorrow.”

Marshall Deakins of Dunlap, Tenn., who finished third in the Guntersville EverStart last year, is currently in third again with 36 pounds.

Since the fish have not ganged up on Deakins’ best deep places, he is using a run-and-gun approach to cover a lot of different water.

“I’m hitting about 20 spots a day,” Deakins said. “Some are deep and some are shallow. I spend about 20 minutes on each spot.”

“They were supposed to run current today, but I didn’t notice much of it,” he said. “I think if we could get some current, it would turn those deeper places on.”

Rodger Beaver Leesburg, Ga., brought in one of the bigger stringers of the tournament today, weighing 21 pounds, 9 ounces. He is now in fourth place with 35 pounds.

“I fished the same water today; the bigger ones just bit for me,” Beaver said.

“I’m fishing this lake just like I fish Seminole (Beaver’s home lake) this time of year,” he added. “I’m fishing deep grasslines that have little blowouts and points in them. But I only have two such spots, and I’m hoping they hold up.”

Edward Gettys of Stevenson, Ala., is in fifth place with a two-day total of 34 pounds, 10 ounces.

Gettys has been fishing Guntersville for 20 years, and he knows many of the lake’s underwater features.

“Over the years, I`ve learned all of the twists and turns of these humps and ridges,” Gettys said. “I’m swimming an 11-inch worm in deep hydrilla and milfoil around those bottom changes”

Having won the Guntersville EverStart two years ago, Gettys is a serious threat to win again.

“I have two places I’ve been saving for the finals,” he added. “I haven’t even looked to see if anybody is on them, but hopefully they’ll pay off tomorrow.”

Daniel Heideger of Killen, Ala., is leading the Co-angler Division of the Guntersville EverStart with a two-day total of 26 pounds, 1 ounce.

Heideger fished a combination of top-water lures and plastic worms the last two days to amass his catch.

Yesterday’s leader Michi Oba of Tokyo, Japan, is in second place with a two-day total of 25 pounds, 9 ounces.

Oba caught his fish on a combination of top-water lures and spider jigs today.

Greg Coots of Fyffe, Ala., is in third place with a two-day total of 24 pounds, 8 ounces.

There was a tie for big bass in the Co-angler Division between Teddie Harrison of Clewiston, Fla., and Mike Freeman of Oxford, Ala. Both caught bass weighing 7 pounds.