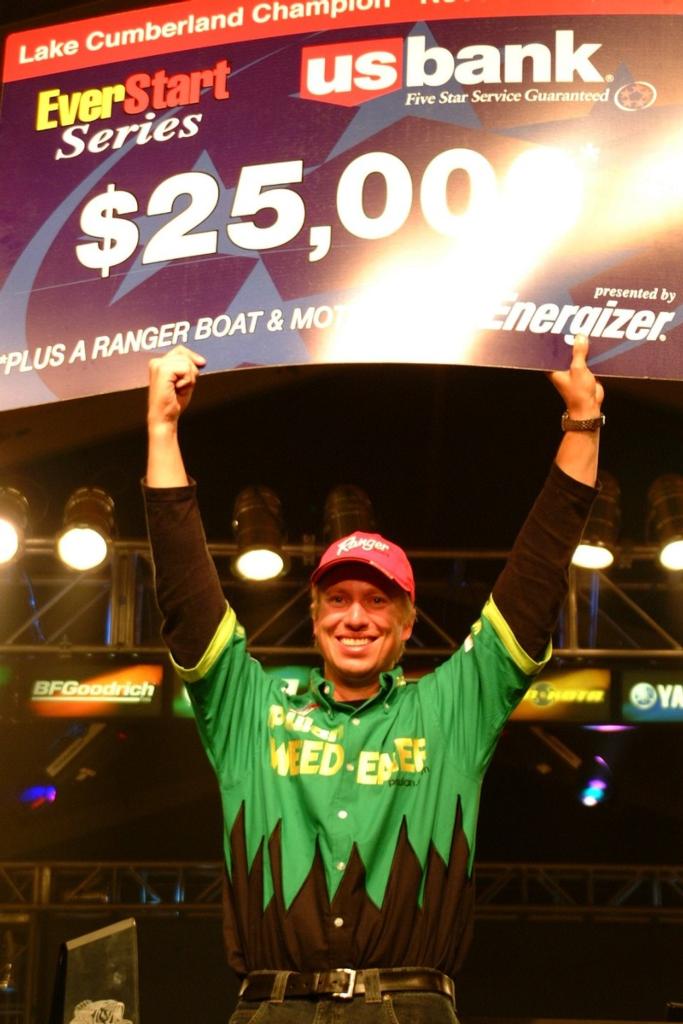 In the last two years in the EverStart Series Western Division, Ehrler has had a second-place finish and three third-place finishes.

When he led the top 10 anglers out on the water Saturday for the final day of competition in the 2004 EverStart Series Championship on Lake Cumberland, he was determined not to let this one slip away.

At about noon, he set the hook on what he thought was a good fish, and his line broke. Adding insult to injury, the evasive bass leaped victoriously – with Ehrler’s jig still in its mouth.

“I saw it jump and try to shake my jig; it was good one, about a 3-pounder,” Ehrler lamented in the boat yard just before weigh-in. “I’ve lost another one.”

But Ehrler’s dejected state waned a little under the EverStart Series weigh-in tent as he watched local favorite H.C. Sumpter of Nancy, Ky., fall short of taking away his slim lead.

Then, when Lloyd Pickett of Bartlett, Tenn., failed to bring up a fifth keeper bass to take the lead, Ehrler was left to bask in the glory of the limelight – finally.

For the record, Ehrler brought another four bass to the scales today weighing 5 pounds, 13 ounces for a two-day total of 10 pounds, 10 ounces.

“I just can’t believe it,” Ehrler gasped while realizing his win. “I thought for sure I had lost again. This is amazing. I think I might cry.”

Ehrler adopted a run-and-gun approach to Lake Cumberland that involved running dozens of cuts and pockets on the main lake each day, fishing any piece of wood he could find.

He used a D&L jig in 3/8- and 5/16-ounce sizes with a Reaction Innovations Smally Beaver trailer. Both jigs were a brown and green color combination.

He fished the jigs on 12- and 16-pound-test Sunline Fluorocarbon.

“The key was to cast up as shallow as possible on the wood,” he said. “Many of my bites today came out of 6 inches to 3 feet of water.

“I would pull into a little cut or pocket, make a couple of casts to any piece of wood on the bank and then run to the next pocket. If the area looked really good, I might stay and grind around in there a while, but if it didn’t feel right, I’d bounce over to the next place.”

Since Ehrler is the original owner of a Ranger boat, his win garnered him a financial windfall. He was awarded a Ranger 519VS rigged with a Yamaha Outboard and $25,000 cash for his win. In addition, he received $10,000 from Ranger in contingency money and another $10,000 from Ranger for being Ranger Cup qualified. In all, Ehrler hauled in some $80,000 in cash and merchandise for his win.

Every time H.C. Sumpter made a trip to the scales this week, the roar of the crowd that followed left little doubt as to who was the local favorite.

Sumpter made a hard charge at the win today by being the only pro to bring in a five-bass limit. But in the end, he fell 7 ounces short of victory with a two-day total of 10 pounds, 3 ounces.

In the qualifying rounds, Sumpter scored some big smallmouths on top-waters, but he could never get the smallmouth bite going again in the finals.

Today he had to resort to a spinnerbait and jigging spoon to catch his fish.

“I caught three on a jigging spoon in about 50 feet of water and two on a spinnerbait in a foot of water,” he said.

The comeback of the day belonged to Lloyd Pickett. Pickett charged from eighth place Friday to third today on the strength of the day’s biggest catch – 8 pounds, 1 ounce – and combined for a two-day total of 9 pounds, 14 ounces.

Pickett fished a Carolina rig in the Conley Bottom area of Lake Cumberland.

“My main area was a gravel point that ran out to a creek bend in about 14 feet of water,” Pickett said.

“The big lizard was my big-fish bait,” Pickett said. “My son and I fished over here a few weeks ago and caught some good 3- and 4-pound fish on it.”

Pedigree pro Greg Pugh of Cullman, Ala., had to break out the spinning rod and a 1/4-ounce Shaky Head rig with a 6-inch finesse worm today to collect four bass weighing 3 pounds, 12 ounces for a two-day total of 8 pounds, 5 ounces to finish fourth.

“Earlier in the week I had been fishing a Suddeth Little Earl crankbait and a Fat Free No. 5 crankbait on creek bends in the back of Otter and Beaver Creeks,” he said. “They wouldn’t bite the crankbaits today, so I had to get out the finesse stuff to get them to eat.”

Warren Wyman of Calera, Ala., added one nice 3-pound largemouth to his two-day total of 8 pounds, 3 ounces to finish fifth.