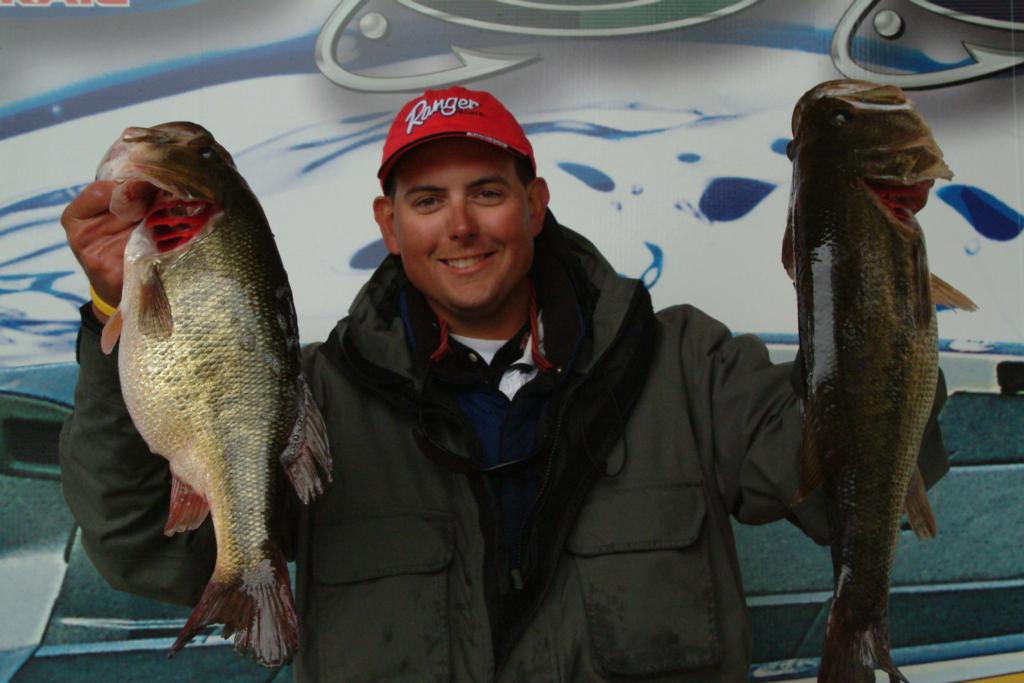 After all, Newton’s roommate on the road, fellow Alabama pro William Davis, claimed in practice that he hadn’t really been catching anything. If that’s the case, then how does he explain his record-breaking catch of 51 pounds over two days?

Davis’ jaw-dropping numbers set a new EverStart Series record for heaviest two-day catch and gave him a near 10-pound lead over his nearest competitor, pro Darrel Robertson. It comes as no surprise that the new record came on Sam Rayburn, a veritable bass factory. In two days alone, EverStart competitors have weighed in more than 6,628 pounds of bass despite off-and-on thunderstorms and rapidly falling temperatures.

Davis’ day-one catch of 23 pounds, 14 ounces was good enough for second behind Texas native David Curtis, who had 25-3. It was his day-two catch, however – the largest stringer of the tournament so far, weighing in at a whopping 27 pounds, 2 ounces – that put Davis in the record books.

“I’m thrilled to death,” said Davis, who ranked 10th in the 2004 Central Division points standings. “I’m covering a lot of water and slowing down in certain areas and flipping.”

Davis said he was not using a run-and-gun pattern, however, and said he caught his bass in only two areas with a black-and-blue jig.

“The fish are everywhere,” he said. “I just picked out two pockets where I knew they were.”

Although the Sam Rayburn area did experience thunderstorms and rain on day one as well as day two, the air temperature dropped considerably over the course of the day Thursday. Most anglers expect the cooler weather to hinder the bite for the final two days, but Davis, for one, hopes it stays the way it is.

Although his opening-round weight was dwarfed by Davis’ record stringers, Darrel Robertson did jump five spots up the leaderboard to land in second with a two-day total catch of 41 pounds, 6 ounces. In order to get there, though, Robertson had to change tactics to catch the transitional fish.

“The fishing changed two or three different times today,” Robertson said. “They bit a spinnerbait really good early this morning, and then it was like they quit biting. When fish won’t bite a spinnerbait, sometimes they’ll bite a reaction bait.”

Robertson tied on a reaction bait and eventually hauled in 21 pounds, 13 ounces of bass. He is looking forward to fishing the final two days because he’s enjoying a bass-rich area that he has all to himself.

“I like my chances tomorrow because there’s hardly anybody around me,” he said. “I’m fishing quite a ways up the river around the buck brush. It’s a big area.”

Day-one leader David Curtis slipped a bit on day two, bringing in a relatively light 13 pounds, 13 ounces. But with his day-one weight of 25-3, it was good enough for third place heading into the final round with a two-day weight of 39 pounds.

“Today I didn’t even go to the areas I went to yesterday,” he said. “I got my initial limit going and only culled two times later that day. It was a tougher bite for me in the afternoon, but I was exploring new areas.”

Curtis is currently riding a wave of momentum that started at last week’s Wal-Mart Texas Tournament Trail event on Lake Amistad, where he finished fifth. The tournament left Curtis with barely any practice time, but he’s obviously onto something at Sam Rayburn as well.

“I don’t know how to explain the momentum,” Curtis said. “To come to this lake with only a day, maybe a day and a half, of practice – it’s unexplainable.”

Two anglers caught 10-pound bass on the pro side today to split big-bass honors. Donnie Williams and Brian Beatty both earned $375 for their 10-pounders.

Fredieu leapt 45 places to make the top-10 cut after finishing in 50th after day one with 14 pounds, 5 ounces. He rebounded mightily on day two, weighing in 22 pounds, 12 ounces of bass to land in fifth.

Herald hangs on to co-angler lead

“We fished totally different today than we did yesterday,” said Herald, who caught his bass today on a spinnerbait. “I think I can catch them both deep and shallow.”

Herald went shallow-water fishing today, hunting for bass in 2 to 4 feet of water.

Coffman, a resident of Corydon, Ind., advanced to the finals with a two-day catch of 27 pounds, 5 ounces. Robert Lebert of Brookeland, Texas, sits in the No. 3 spot thanks to his opening-round weight of 27 pounds.

In 2003, Jeary Wheeler of Batesville, Ark., caught the largest bass in EverStart Series history out of Sam Rayburn Reservoir, a 12-pound, 11-ounce monster that has yet to be topped. He caught an 8-pounder today that helped propel him to the finals in fourth place with a two-day total of 25 pounds, 12 ounces.

The top 10 pros and 10 co-anglers will continue competition tomorrow, with weights starting over at zero for the final two days. Takeoff begins at 7 a.m. from the Twin Dikes boat ramp in Jasper. Friday and Saturday’s weigh-ins will begin at 4 p.m. at the Wal-Mart store located at 800 W. Gibson in Jasper.