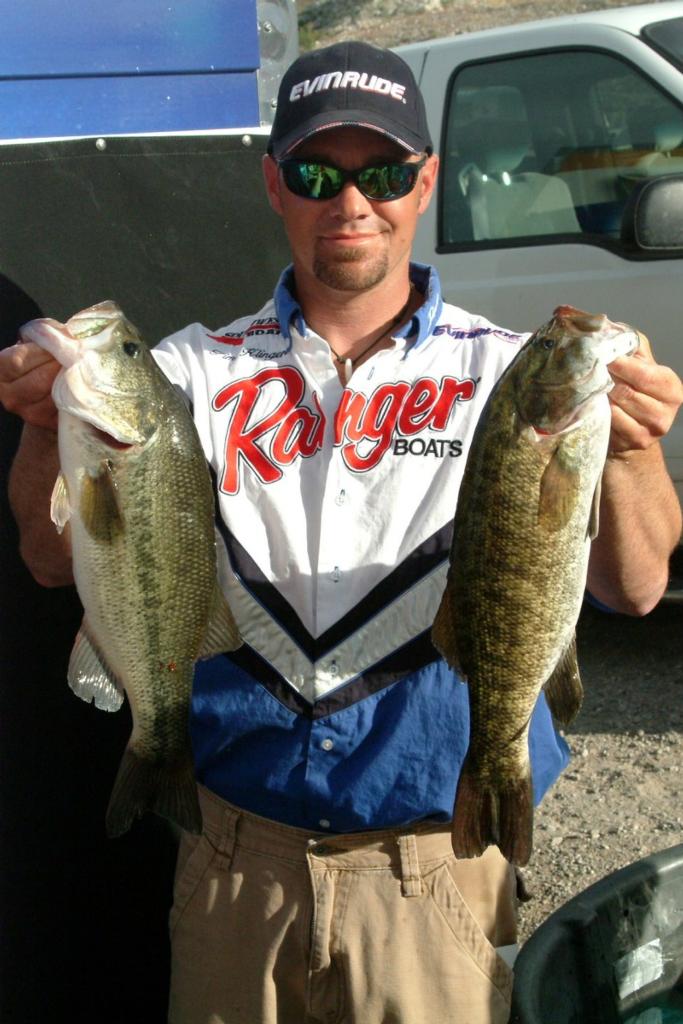 HENDERSON, Nev. – When day one of the EverStart Series Western Division event on Lake Mead began, no one was entirely sure how the fishing would pan out. Would the wind blow? Could they be caught sight-fishing? Would the fish found in practice still be around?

Turns out the fishing was a little bit better than some had predicted, as 124 out of 139 pros weighed in fish, although only 51 hauled in five-bass limits. The general consensus around Lake Mead is that a 2-pound bass is a good catch, so the day-one pro big bass of 3 pounds, 13 ounces – while small compared to the big bass out of many Western lakes – was actually quite respectable.

Leading the tournament after day one is local pro Tim Klinger of Boulder City, no stranger to the top of the leaderboard on Lake Mead. In fact, Klinger took a win here a couple of weeks ago in a team tournament and used those same winning areas today to lead the EverStart field with a five-bass catch weighing 14 pounds, 8 ounces.

“I’m fishing around tumbleweeds and new willow trees that just got flooded,” Klinger said, adding that he was fishing in 5 to 15 feet of water, relatively shallow in deep Lake Mead.

Klinger is employing a rather interesting technique to land his bass, as he is sight-fishing with a reaction bait that the bass are not eating. Instead, he’s using the reaction bait to locate the bass.

“I’m throwing reaction baits until I get follow-ups,” he said. “Then I’m catching them on a soft bait.”

The wind, however, could work in Klinger’s favor tomorrow, as he expects the bass to start munching on the reaction bait in the heavy winds. Today’s forecasted winds of 10 to 15 mph did not quite reach those speeds, although tomorrow they are expected to be much gustier.

Though Klinger’s Lake Mead prowess is impressive – he’s also landed in the top 10 in several Wal-Mart BFL tournaments here – he knows better than to think the odds are squarely in his favor.

“You never know about this lake,” he said. “It could bite me in the butt.”

Bringing in 12 pounds, 13 ounces of bass today were two locals, Chuck English of Las Vegas and Dennis Kolender of Henderson. Kolender claimed his five bass despite losing a couple early in the day. He also caught the day’s heaviest bass on the pro side, with a 3-pound, 13-ouncer.

“Today there was no wind,” Kolender said. “I didn’t even practice Monday and Tuesday because of the wind. It’s just hard to get to your fish.”

With that said, Kolender may have trouble tomorrow if the wind indeed picks up. He reported that he is using two different baits and is fishing both shallow and deep, with shallow being the more productive depth range.

Ramona, Calif., pro Gabe Bolivar sits in the No. 4 spot after day one with a five-bass catch weighing 12 pounds, 12 ounces. Bolivar’s restless behavior – he fished more than 60 spots today – paid off in a big way.

“I just had a mixture of sight-fish and reaction-bait fish,” he said. “I bounced around; I’d make a couple of casts and move on to the next spot.”

Bolivar feels confident heading into the all-important day two thanks to a wide range of areas and techniques that should support him regardless of the weather.

“I’ve got some different areas in completely different parts of the lake,” he said. “I’ve just got to stay focused. I’m really familiar with the lake. In practice, I just checked out areas I’ve fished in the past.”

Like Klinger, Bolivar also has considerable experience on Lake Mead, taking top-10s the last two seasons on the WON bass tour. In addition to his multiple fishing spots, Bolivar is also using different techniques to land his bass, and this week, versatility could be key.

“I’m fishing shallow prespawn fish and sight-fishing,” he said. “I’m fishing zero to 15 feet, which is shallow in this lake.”

Rounding out the top 10 pros on Lake Mead after day one:

At the top of the co-angler leaderboard sits Mike Wokasch, all the way from McFarland, Wis. His five-bass catch of 10 pounds, 12 ounces leads the field by 11 ounces.

He credited his pro partner, No. 47 angler Paul Addi, with putting him on good fishing holes early in the day.

“The weather was great, no wind,” Wokasch said. “I prefer not having wind.”

If the wind picks up tomorrow, Wokasch said he intends to fish the same pattern, which he declined to reveal.

In the No. 2 spot on the co-angler side is Charlie Crawford of Peoria, Ariz., who caught his fish behind a sight-fishing pro – often a challenging situation for the guy in the back of the boat. He caught five bass weighing 10 pounds, 1 ounce.

“Any time your pro’s sight-fishing, it can be tough on you,” Crawford said, adding that he caught his fish fan-casting a 4-inch swim bait. “I’m happy I got a limit. I know how tough this lake is.”

Gary Key of Phoenix sits in the third spot in his first-ever trip to Lake Mead. His five-bass catch of 9 pounds, 15 ounces puts him less than a pound behind the leader.

“I heard it was tough, and I expected it to be tough,” he said. “I found them at a certain depth and caught them all consistently at that depth.”

Gary Haraguchi of Half Moon Bay, Calif., is the No. 4 co-angler thanks to his five-bass catch weighing 9 pounds, 1 ounce. Behind him in fifth is John Bitting of Westminster, Calif., who caught five weighing 9-8.

Anglers will take off on day two at 6:30 a.m. from Callville Bay, located at 100 Callville Bay Road in the Lake Mead National Recreation Area.