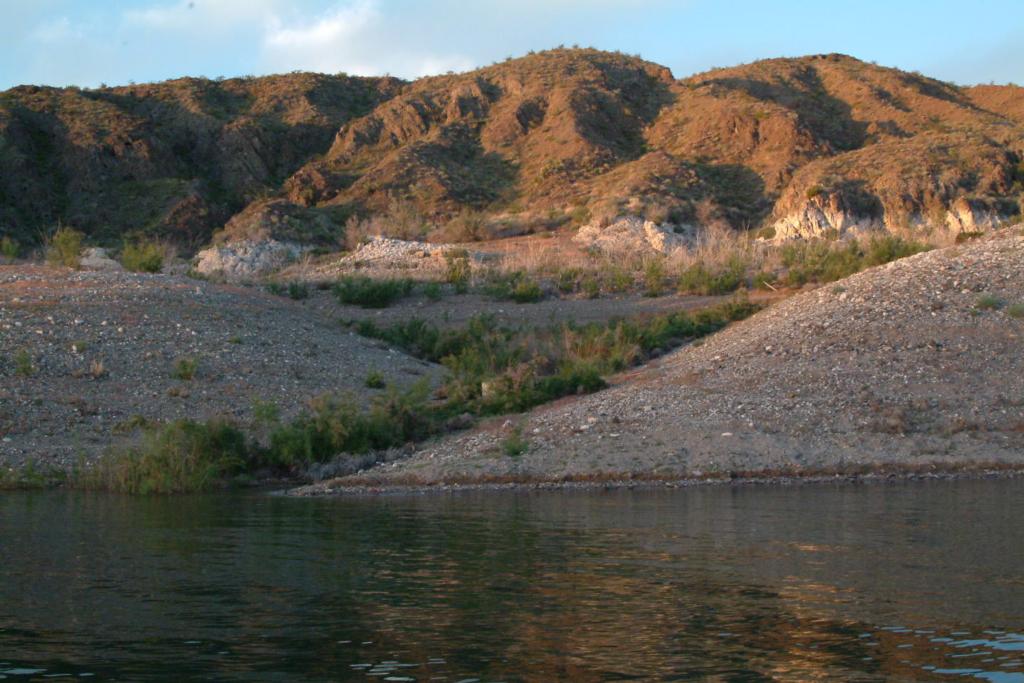 Lake Mead is calm in the early morning hours before the winds roll in. Photo by Jennifer Simmons.
EverStart Western anglers will get blown around Thursday on Lake Mead, but to some, that's good news
April 7, 2005 • Jennifer Simmons • Toyota Series

HENDERSON, Nev. – Although some EverStart Series Western Division anglers worried a little bit yesterday about the wind on Lake Mead, it never really blew – not enough to mess up the fish, anyway. That will almost certainly change today, however, as the entire area – the lake in particular – is under a wind advisory, with sustained wind speeds of 25 to 30 mph expected.

The winds are forecasted to kick in around 10 a.m. this morning and last until around 7 p.m. this evening, with gusts up to 50 mph possible. The winds are rolling in ahead of a cold front, one of several to hit the Lake Mead area in recent weeks.

The wind is not bad news for everyone, however. While quite a few competitors caught bed fish yesterday, many of them who did were also catching them in other ways that will not be as affected by the wind. Included in that group is local pro Don Iglinski of Henderson, who finished 117th after day one. If the wind is indeed in his favor, look for Iglinski to improve those numbers today.

“If the wind picks up, I think the bite will get a little better,” Iglinski said. “The fish are getting more aggressive as the winds come in. There should be more of a reaction bite today. Yesterday it was more bed fishing.”

Iglinski noted that the area’s recent cold fronts and their associated north winds have reduced the water temperature as much as 7 degrees. He said current water temperatures range from 57 degrees up to 61 degrees, whereas a month ago it was averaging 64 degrees.

“It dropped like a rock,” he said. “The fish are messed up.”

Whether the sight-fisher’s backup methods will work or not remain to be seen. Anglers will weigh in today’s catches at Callville Bay Marina, located in the Lake Mead National Recreation Area, beginning at 3 p.m.

Wind: from the south at 25 mph

Day’s outlook: a mix of clouds and sun with gusty winds