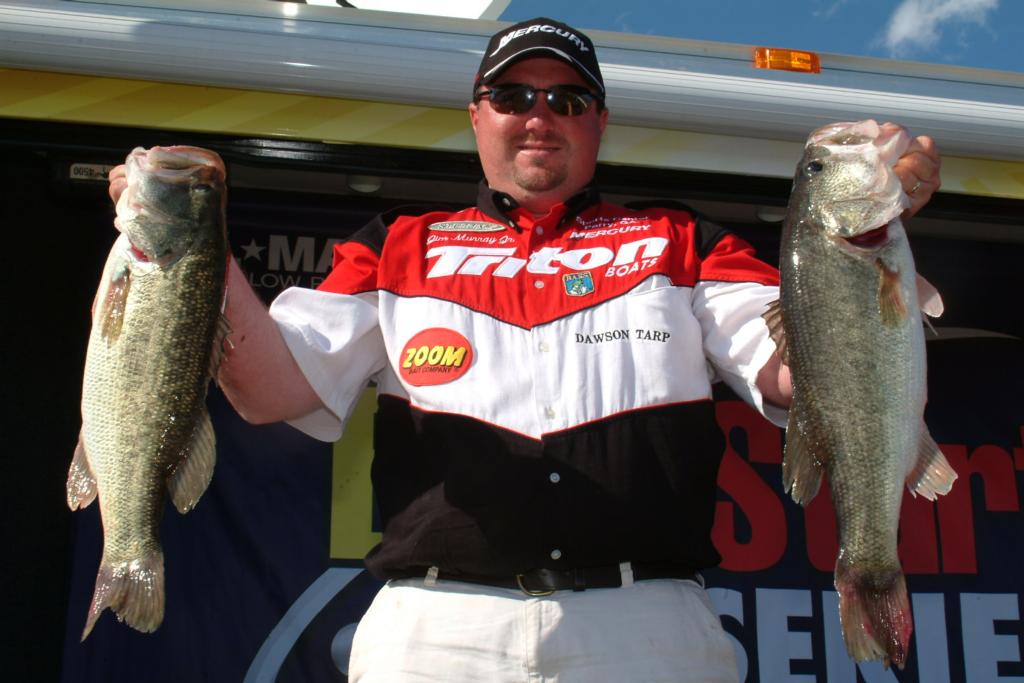 EUFAULA, Ala. – Jim Murray Jr. of Arabi, Ga., knew the secret password to access Lake Eufaula’s big bass today at the EverStart Eastern event. He brought in five bass weighing 24 pounds, 2 ounces to handily take the lead after day one.

“Spawning shad,” Murray said. “The shad spawn is the whole key to what I’m doing. I’m running a bunch of small places where the wind has blown spawning shad up against the bank. I started right here at Lakepoint and fished all the way to the dam and back today.

“I probably fished a hundred places. I never spent more than five minutes on a spot unless I caught a fish off it. The fish always bit on the first cast or two – any cast after that was basically worthless.

Murray reported catching 12 keepers today and said if the shad are not on his places tomorrow, his pattern might die.

J.T. Kenney of Frostburg, Md., is back to doing what he loves to do. The pro flipped up 20 pounds

“I had those by 8:30 this morning,” Kenney said of his five-bass limit. “I caught four or five more keepers, but they wouldn’t help me so I just went practicing.”

Kenney is flipping and pitching a 1-ounce Lil’ Hustler jig in various spots along a 10-mile stretch of river.

“There has been a definite pattern to it, and I hope it holds,” Kenney said. “I don’t know if they are pre- or postspawn fish, but I do know one thing: They are hungry fish. When they hit that jig, they knock a foot of slack in the line.”

Tim Peek of Sharpsburg, Ga., is in third place with 18 pounds, 6 ounces.

Peek is throwing a Rabbit Dog spinnerbait and FLW Tour jig in shallow water to catch his fish.

“I had eight keepers today,” Sharp said. “I’m pretty sure they are postspawn fish because they are long and skinny.

Koby Kreiger of Okeechobee, Fla., who won the Lake Eufaula EverStart last year, is in fourth place with 17 pounds, 6 ounces.

Ricky Shumpert of Lexington, S.C., is doing what he loves on Eufaula: throwing a spinnerbait in shallow water up the river. He caught 16 pounds, 8 ounces for fifth place today.

“It was a lot tougher than it has been in practice,” he continued. “I only caught nine keepers today. I think these high skies have shut them down because I was getting a lot more bites in practice.”

Rounding out the top 10 in the Pro Division of the EverStart Eastern on Lake Eufaula:

The day-one big-bass honors in the Pro Division went to Ron Wolfarth of Locust, N.C., for a 7-pound Lake Eufaula bass that bit a brown jig.

Wilson No. 1 in Co-angler Division

Greg Wilson of Dothan, Ala., brought five bass to the scales weighing 18 pounds, 4 ounces today to take a commanding lead in the Co-Angler Division of the EverStart Series Eastern event on Lake Eufaula.

“I fished with Craig Taylor from Florida today, and he was a fantastic partner,” Wilson said. “We both had a great day.”

Wilson, who fishes Eufaula often, felt right at home in the water that Taylor had him in today.

“We were throwing spinnerbaits in shallow grass, and that’s what I love to do here,” he said.

Bill Hulet of Broken Arrow, Okla., is in second place with 13 pounds, 3 ounces.

Robert Horick of St. Petersburg, Fla., is in third place with 12 pounds, 8 ounces.

Derek Mcafee of Lagrange, Ga., is in fourth place with 12 pounds, 7 ounces.

And Arch Cornett of Huntsville, Ala., and Bryan Thrift of Shelby, N.C., are tied for fifth with 12 pounds, 5 ounces.

Rounding out the top 10 in the Co-angler Division of the EverStart Eastern on Lake Eufaula:

The day-one big-bass honors in the Co-angler Division went to Gary Thacker of Covington, Ga., for a 6-pound, 14-ounce Lake Eufaula largemouth.