Reaching the Peek at Eufaula 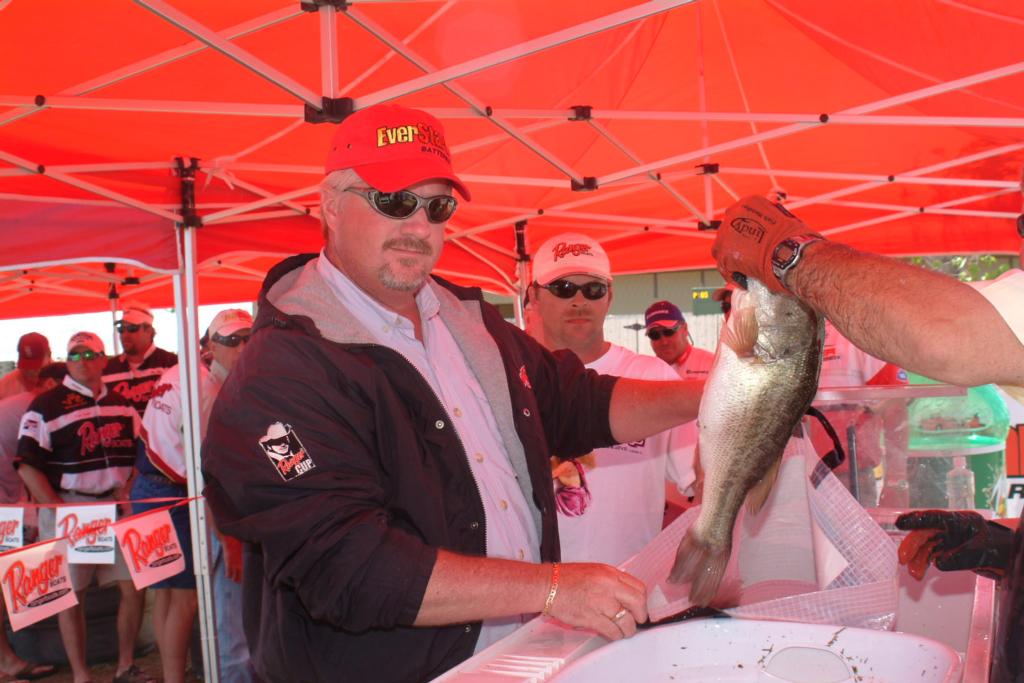 EUFAULA, Ala. – Clear skies, light winds, dropping water and fishing pressure all took their toll on the catch rates at Lake Eufaula today. Pros making the top-10 cut in the EverStart Series Eastern Division essentially dug in and held onto their positions from yesterday. Seven of the top 10 pros from yesterday stayed inside the coveted cut today to fish again tomorrow.

Tim Peek of Sharpsburg, Ga., took over the lead with five bass weighing 16 pounds, 10 ounces, which pushed his two-day total to 35 pounds even.

“The fish were superaggressive this morning,” Peek said. “They would absolutely swallow that Rabbit Dog spinnerbait. I had my limit in an hour and 15 minutes and then went and helped my co-angler catch 12-12, which put him in the cut.”

Peek is fishing one area that is teeming with shad and fish of all species.

“I’m fishing submerged hydrilla that I know is there from my previous experience on the lake,” he said. “We caught all kinds of fish in there today – catfish, hybrids and bass. And when I took my fish out of the livewell this afternoon, they had spit up a dozen shad that were all about 4 inches long.”

Patrick Pierce of Jacksonville, Fla., has weighed in two 16-pound-plus strings for second and a two-day total of 33 pounds, 2 ounces.

Pierce is fishing one area in a major creek.

“I caught them shallow yesterday with all that wind, but today I had to back out and catch them deeper in about 12 to 15 feet of water,” he said. “I think there are plenty of fish in the area; it’s just a matter of changing with them every day, and I’m sure I’ll have to change with them again tomorrow.”

Getting the unofficial “consistency award” for the last two days is pro Pat Fisher of Danielsville, Ga. He brought in 15 pounds, 15 ounces yesterday and 16 pounds even today for a two-day total of 31 pounds, 15 ounces.

Fisher, who has won an EverStart event on Eufaula before, has been cranking riprap to catch postspawn fish.

“There’s a big shad spawn going on on the rocks,” he said. “I’ve been throwing a little shallow-running crankbait, but I may change up tomorrow. I stopped on a flipping spot this afternoon and noticed that a few bass had pulled up on beds, so I might do a little more of that tomorrow.”

Koby Kreiger of Okeechobee, Fla., won the Lake Eufaula EverStart last year, and now he is in prime position to do it again.

He is currently in fourth place with a two-day total of 30 pounds, 9 ounces.

Kreiger, who is well-known for his sight-fishing ability, does not think the sight bite is over just yet.

“I think some fish are still spawning, but the water has been too high and stained to see them, so I’ve had to blind cast to them,” he said. “The water has dropped about a foot and it has cleared up, so those fish are more visible now. I’ll probably do a lot more sight-fishing tomorrow.”

After catching 20 pounds, 9 ounces yesterday, J.T. Kenney of Frostburg, Md., brought in four bass for 9 pounds, 6 ounces today. He is now in fifth place with a two-day total of 29 pounds, 15 ounces.

“I didn’t do that on purpose,” he said of his lighter weight. “They just didn’t bite near as well today. The water has dropped, and I think that might have hurt my bite.”

Like Fisher, Kenney said he saw a few bass trying to get on beds late this afternoon.

“If I make an adjustment, it will be to sight-fishing,” he said. “It looks like that flipping bite is going away fast, so I might be burning up the banks looking for spawners tomorrow.”

Rounding out the top 10 anglers in the EverStart Series Eastern on Lake Eufaula:

Bryan Honnerlaw of Wilmington, Ohio, won the day-two big-bass award in the Pro Division with an 8-pound largemouth.

“I love to skip a jig,” Thrift said, “So whenever my pros have gotten around a dock or boathouse, I’ll take that jig and fire it up under there. That’s how I’ve caught all my fish so far.”

Brian Davis of Leesburg, Ga., is in second place in the Co-angler Division with a two

“I’ve just been in the back of the boat doing my own thing,” Davis said. “No matter how my pro is fishing, I’ll drag a Senko out behind the boat. It’s been working pretty good, so I don’t plan to change much tomorrow.”

Bill Hulet of Broken Arrow, Okla., is in third with a two-day total of 19 pounds, 2 ounces.

Greg Wilson of Dothan, Ala., is in fourth with a two-day total of 18 pounds, 4 ounces.

Matthew Parker of Whitesburg, Ga., is in fifth with a two-day total of 14 pounds, 14 ounces.

Rounding out the top 10 co-anglers, who will be fishing the next two days:

The top 10 pros and 10 co-anglers will start from zero tomorrow at 6 a.m. at Lakepoint State Park.