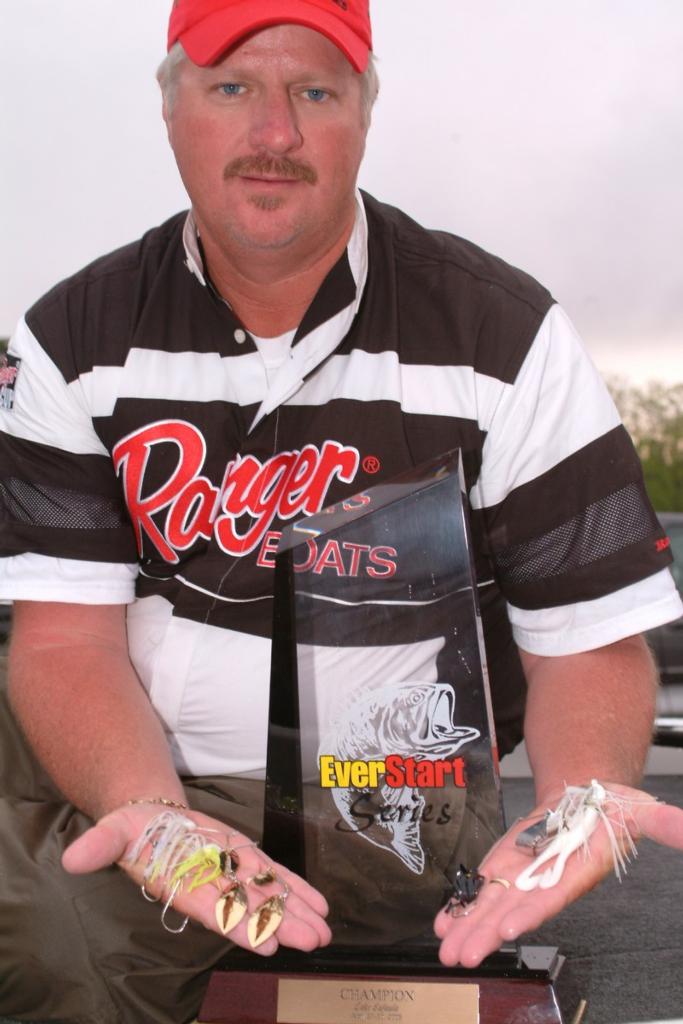 EUFAULA, Ala. – They dodged rain. They dodged lightning. They dodged heavy winds. But none of the other nine pros in the EverStart Eastern on Lake Eufaula could dodge Tim Peek of Sharpsburg, Ga., today.

Peek once again brought in the heaviest five-fish limit of the day, 20 pounds, 3 ounces, to prove that he discovered the largest concentration of big bass on Eufaula this week.

He won the EverStart Series event with a two-day total of 43 pounds, 6 ounces. And all total, Peek brought in nearly 80 pounds of bass over the four-day Eastern Division tournament.

“This is incredible,” Peek said, “Normally a place like that doesn’t hold up for four days in a row. But this place just kept producing quality fish day after day. I’m worn out, both physically and mentally, from worrying if they would still be there each day.”

Peek’s primary spot was just minutes from the Lakepoint takeoff where Cowikee Creek meets the main river. His key feature was a 250-yard stretch of submerged hydrilla that was teeming with shad.

“My boat was sitting out in about 7 or 8 feet of water, and I was casting spinnerbaits up into hydrilla that was about 3 feet deep.”

Peek located the area last fall when the hydrilla had topped out, giving him a good idea of how the grass laid out in the area.

“I also caught a few during the event on a Lunker Lure buzzbait (black) and swimming a white jig,” he added.

conditions would bring his fish back up shallow. He was right. During the storms today, Pierce had his best day of the tournament, bringing in 18 pounds, 12 ounces to move to second with a two-day total of 33 pounds, 5 ounces.

“They really bit for me today,” Pierce said. “This weather made them go crazy down there; I probably caught 15 keepers.”

Pierce was fishing down below White Oak Creek in shallow grass beds that contained spawning shad. On days two and three, however, dropping water levels and bright sunshine caused his shallow grass to evaporate.

“That’s when I had to start fishing deep blowdowns to survive,” he said. “I would slow-roll a spinnerbait through the trees, where the fish were suspended in 5 to 6 feet of water.”

Pro Pat Fisher of Danielsville, Ga., brought in 19 pounds, 7 ounces today to move from sixth to third place with a two-day total of 31 pounds, 4 ounces.

Fisher’s vast improvement came from a change in fishing locations.

Koby Kreiger of Okeechobee, Fla., ended up fourth with a two-day total of 26 pounds,

Kreiger worked two patterns during the week: a shad-spawn pattern and a sight-fishing pattern.

“Each morning I’d run around and throw a CP Ripper homemade crankbait on places where the shad were spawning to get a big bite and then finish my limit by sight-fishing and catching fish guarding fry,” Kreiger said. “Today, because of the weather, I spent most of the day fishing the shad-spawn pattern on riprap.”

When sight-fishing, Kreiger relied on a Zoom 8-inch lizard and a Zoom Centipede.

Murray’s main pattern all week was a homemade 3/4-ounce spinnerbait with large, double willow blades (No. 5 and No. 6) fished in places where shad were spawning.

“I fished dozens of places up and down the lake,” Murray said. “I like that big bait because it resembles the big shad that were spawning on those places. It also discourages other species like hybrids from messing with the bait.”

Rounding out the top 10 pros in the EverStart Series Eastern Division event: