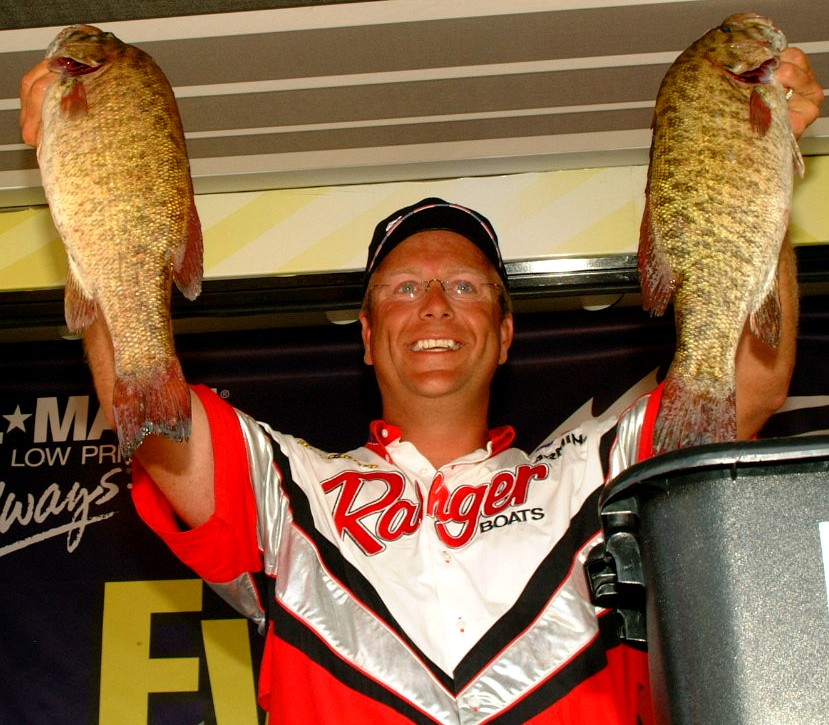 TRENTON, Mich. – In a week of amazing weights in the 2005 EverStart Northern opener, pro Chris Cox of Appleton, Wis., capped it with an astounding win by way of a two-day final-round weight of 45 pounds, 2 ounces. Perhaps just as amazing is the fact that Cox achieved all this in the wake of a near-fatal heart attack earlier in the year.

After his first year of fishing the Wal-Mart FLW Tour as a pro last season, Cox had a scary start to 2005. He said he’d been suffering from what he thought was heartburn for several days leading up to an ice-fishing trip he was about to take with his young son in January. When his condition worsened, he drove himself to the hospital instead, where he was told he was lucky to have made the trip. Not long after, he had a heart attack that required emergency life-saving measures to bring him back.

“I was dead on the table … they shocked me three times,” Cox said minutes after his comeback win Saturday.

Cox is only 38, but a hereditary heart condition related to “bad cholesterol,” which he said should be manageable from here on out, almost made him a victim. Three stents and eight weeks of rehabilitation later, Cox was back to doing what he does best: fishing and fathering – his wife just gave birth to a baby girl three weeks ago.

It was clear from his stellar performance this week in the EverStart Series Northern Division opener on the Detroit River that Cox is hardly the victim type. Just ask his opponents. 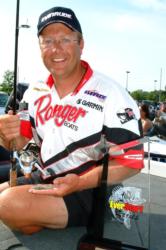 Cox, who has qualified for the EverStart Series Championship both years he fished the Northern Division, blew everyone away with an astounding sack weighing 24-15 Friday – it would have broken the 25-pound mark if not for a dead-fish penalty – and then sealed the deal today with another massive stringer weighing 20-3. All totaled, he weighed in a staggering 84 pounds of smallmouth bass over the course of the four-day tournament, worth nearly $20,000 in cash plus a new fully rigged Ranger boat.

“It was a common reef … a rock pile about 20 yards long,” Cox said of his tournament-winning location, which he had entirely to himself until today. The rock pile is in Lake Erie, exactly 35.7 miles from the launch site on the Detroit River. This morning he said there were a few local boaters, who had likely heard about his king-sized sack Friday, who followed him there.

But the company was not enough to shut down the location, though he moved to his secondary area for a while later in the day, not far from other top-10 sticks including runner-up Eric Struif and Erie-Detroit River king Steve Clapper.

“It slowed down for a little bit there, so I moved to my secondary area,” he said, which wasn’t too far away. But it was his more pristine reef that truly made the win possible – that and a steady bite all week at an exact depth of 26 to 27 feet.

“I fished (a Detroit River tourney) two years ago, and everybody knew about (the reef),” Cox said. “But either everyone forgot about it, or they weren’t biting for anyone in practice. I don’t know.”

Cox spent about six days prefishing, getting reacquainted with the rock pile, “fine-tuning the location” and marking its highest point. He dead-sticked a cucumber Poor Boy gobie tube with gold flakes, “just laid it and dragged it,” pretty much throughout the entire tournament, he said. He said the real element of his drop-shot rig that brought so much success, however, was the 1/2-ounce Lindy rattling weight that drug behind on the rocks.

So far this year Cox has only fished a Wal-Mart BFL event and some local tournaments, including some with his wife. But he is registered for the entire Northern Division season and is considering trying to sign up for the EverStart event on Lake Champlain later this year. With a quick lead out of the gate for the points race in the North, Cox may very well be championship-bound as well, so 2005 could easily shape up to be the biggest year of his career – and it’s clearly already been a life-changing one. 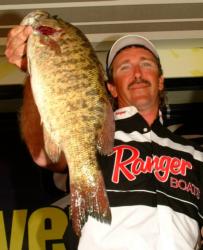 Pro Eric Struif of Lake Villa, Ill., made a valiant effort today to make up a 3-pound, 12-ounce deficit for a shot at winning the Northern opener – and that after hauling in a huge 21-3 sack Friday. Though he improved by an ounce and landed the largest sack of the day at 21-4, Struif had to settle for second place a second day in a row with a final-round total of 42-7. But the finish was not sour grapes; he said it was sweet, not to mention worth $9,600.

“This goes down as one of my best tournaments,” he said. “This fishery is incredible.”

Pro Kota Kiriyama – who has recently relocated to Birmingham, Ala., and is not now living in California as was reported earlier this week – got bit this week, and not just by quality bass, but also the EverStart bug. The BASS veteran was fishing his first Wal-Mart FLW Outdoors event this week, and he said he had a great time making such a big splash.

“I love the EverStart; I’m pumped,” he said. “I like the format here. This is my first tournament with you guys, and I really like the organization.”

Later he said he intends to sign up for more events – some more Northern Division tourneys with any luck.

“I’ve never been to a place like this where I can catch this many smallmouths,” he said.

And catch them he did. He bagged an impressive 37 pounds, 1 ounce over the finals, worth $8,650, by fishing Lake Erie in Canadian waters, in roughly the same area where most of the top 10 competitors were finding success. He said he fished a green-pumpkin or watermelon tube with “a what do you call it – jighead? That’s all you need.”

Pro Steve Clapper of Lima, Ohio, is renowned for his mastery of the Detroit River, Lake Erie and Lake St. Clair, all of which were open to competitors this week. In fact, he recently won his fourth Detroit River BFL event, and has logged many, many other wins and top-10s on these bodies of water.

It was Erie he chose this week upon with to work his Northern magic, hauling in 35-3 over the final two days, worth $7,650. Clapper improved his catch today by one fish and nearly 2 pounds.

“I’m just happy I got this far,” he said. “I’ve seen a lot of fish caught, but I really scrambled.”

Clapper’s “scrambling” on Erie is the average angler’s good day. He made the top-10 cut and then placed fourth fishing a few rigs: a prototype swimbait, and a “Big Dude” jighead by Right Bite with a ¾-ounce Dream tube, “jerking it hard.”

Woolley moves up to finish fifth

He said the key to his success was in the details of the underwater structure he found on Erie. The humps he chose to fish had subtle, 2-foot drops where he found his fish.

“You look around for differences in bottom change – like rolling humps,” he said. “Those fish are hiding in those pockets. They may seem little, but a 2-foot change is a big change for a fish.”

Woolley was casting and then dragging a drop-shot rig over the humps. He fished a Senko wacky-style for his bigger fish as well as a watermelon-cream gobie.

All of the top five pros caught limits, and rounding out the top 10 to conclude the EverStart Series Northern event on the Detroit River:

The next EverStart Series Northern Division event will be held Aug. 3-6 on the Mississippi River near Onalaska, Wis.