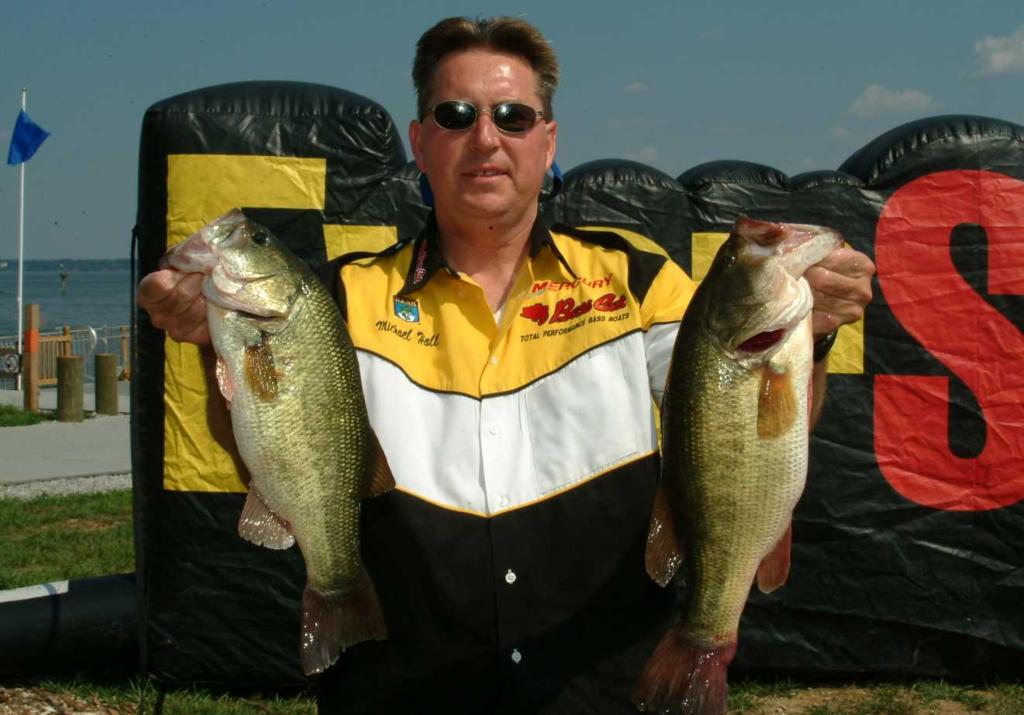 WOODBRIDGE, Va. – Wednesday at the Potomac River was a sweltering day of fishing to open the third EverStart Series Northeast Division tournament of the season. However, it was the steady rain on Tuesday that helped Michael Hall of Annandale, Va., commandeer the Pro Division lead on day one with a five-bass weight of 17 pounds, 10 ounces.

“This river’s been very tight with the fish. A lot of tournaments here lately have been won with 10- or 11-pound bags,” said Hall, who lives about 25 miles from the weigh-in site at Leesylvania State Park. “But the bad storms last night did lower the water temperature by about 5 degrees. I believe that storm really helped out for those of us who are working hard and sticking it out.”

EverStart anglers practiced through some pretty sweaty conditions on the Potomac the week leading into the event and reported a very sluggish bass bite. After all their hard work figuring out a tough, sunny, late-August bite, the rains came last night and washed out many pros’ fishing spots. Exactly 47 pros weighed in five-bass limits Wednesday, and just five co-anglers managed to catch limits – a far cry from the astounding numbers of fish we saw here at the Wal-Mart FLW Tour Chevy Open in June.

Erie, Pa., pro Dave Lefebre, who caught just two bass, agreed that the waterway looked a little foreign to him today, as well. “My areas are just covered with scum-looking stuff. There’s hydrilla everywhere, and there’s not supposed to be hydrilla here. It looks nothing like I’ve ever seen it.”

Perhaps that’s why the locals, who know the river best, were able to adjust to the conditions and find quality fish when almost everyone else had trouble. In addition to Hall, Mike Hicks of nearby Mineral, Va., and Peter Herbst of Arlington, Va., rounded out the top three spots on the pro leaderboard.

“I was fishing slowly with soft plastics,” Hall said. “The key was to fish it as slow as possible. Most of my fish I caught on the incoming tide in water 5 to 5 1/2 feet deep around grass. They bite in spurts. There was a really good bite this morning, then they stopped, then it picked up again between 12:30 and 1:30. If you know where there are fish, you’ve just got to hang around and stick with it.”

Hall managed to catch nine keepers Wednesday, and it was the catch of a career for the Wal-Mart BFL veteran fishing his first EverStart event.

“That’s probably the biggest one-day stringer I’ve ever had in a tournament,” he said. “I’m really excited about it, and thank God I was able to do it today.”

Herbst only caught five keepers, but they were quality bass. He said he fished slowly with jigs and plastics all day, adding that working the tide was crucial to his success.

“I fished a lot of grass and pitched a lot of wood. The ones I caught were just quality fish,” he said. “I caught most of my fish about two hours before low tide. Definitely, those last couple of hours before low tide are key. Low tide (at Woodbridge) should be about 1 o’clock tomorrow, and it should be high tide right at takeoff. Look for a lot of people to go south tomorrow and work the tide back up.”

Coming off a one-fish performance at the smallmouth event that was Lake Erie last month, pro Tim Peek of Sharpsburg, Ga., grabbed the fourth spot with a limit weighing 14 pounds, 5 ounces.

The difference between this event and the last Northeast Division tournament? It’s the fish.

“We’re fishing for green bass instead of brown ones,” Peek laughed.

Still, Peek, who won the Southeast Division event at Lake Eufaula earlier in the year, says there’s more to it than that.

“I think we can do it again tomorrow,” he said. “I’ve got it figured out for the afternoon bite. Plus, I got three of my fish in the morning today, which was a bonus.” 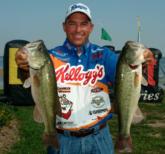 Earlier this summer at the end of the FLW Tour season, pro Clark Wendlandt of Cedar Park, Texas, used the Potomac River event to bust out of his much-discussed yearlong slump, finishing that event second and winning $100,000. He kept it going in EverStart competition here Wednesday by weighing in five bass worth 14 pounds even and claiming fifth place.

“Most of my day really wasn’t that great,” he said, “but this place has so many fish, I managed to stumble onto a few.”

Then he laughed and added, “Oh yeah, I like it here.”

Rounding out the top 10 pros after day one at the Potomac River:

Michael Huminik of Stafford, Va., caught a 5-pound, 13-ounce largemouth to earn the day’s Snickers Big Bass award for the Pro Division, worth $550.

Doug Jenkins of St. Leonard, Md., leads the Co-angler Division after catching one of the five limits of the day from the back of the boat. His limit weighed 12 pounds, 2 ounces.

Larry Church of Keysville, Va., hauled in the day’s Snickers Big Bass award on the co-angler side – worth $210 – for a nice 5-pound, 10-ounce kicker largemouth. He claimed third place with a two-bass weight of 8 pounds, 15 ounces.

Day two of Northeast Division competition at the Potomac River begins as the full field takes off from Leesylvania State Park at 6:30 a.m. Eastern time Thursday for the second half of the opening round. Following tomorrow’s action, both fields will be cut to the top 10 anglers apiece based on two-day total weight.