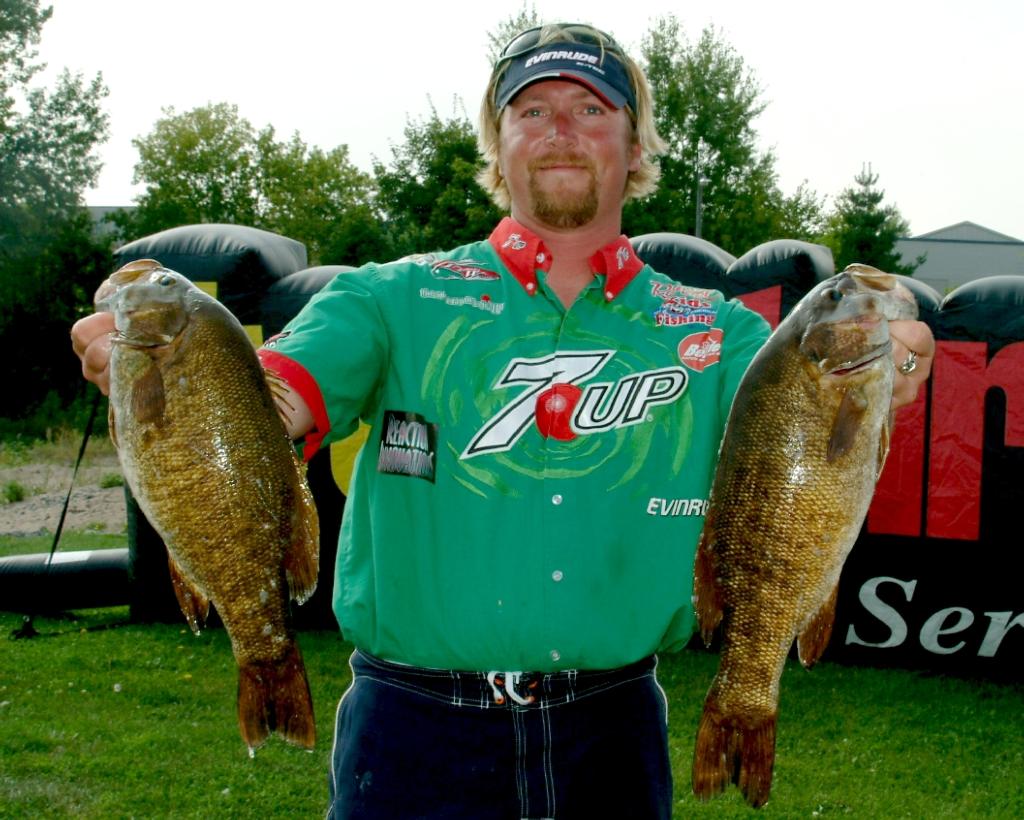 PLATTSBURGH, N.Y. – There’s an old 7UP advertising jingle that went something like this: “Feeling 7UP / I’m feeling 7UP.” While it’s tough to tell exactly what that really meant, there’s no question what it means for 7UP-sponsored angler and all-around laid-back dude J.T. Kenney. With a two-day weight of 37 pounds, 11 ounces, the pro from Frostburg, Md., led all challengers in the opening round of Northeast Division competition at Lake Champlain and made his fifth EverStart Series cut of the year.

Simply put, few anglers – if anyone – are feeling it as well as Mr. Kenney in FLW Outdoors competition this season. In addition to his five EverStart cuts – which includes two runner-up finishes in Southeast Division competition – Kenney top-10ed twice on the Wal-Mart FLW Tour and vied for that tour’s Angler of the Year until the final event of the season.

Kenney caught the second-heaviest limit of Champlain bass Thursday – 20 pounds, 1 ounce – which added to his Wednesday limit – 17-10 – and gave him a 1-ounce lead over second-place Brian Bylotas heading into the 10-boat final round.

“I think I was done fishing even quicker today than I was yesterday,” said Kenney, who claimed that he stopped fishing at 9 a.m. Wednesday. “I didn’t even want to catch 20 pounds, but this place is just so good.”

Kenney’s five-bass limit consisted of all smallmouth bass Thursday. Unlike a lot of pros who’ve been characteristically guarded about their smallmouth baits so far this week, Kenney doesn’t seem to care if anyone knows what he’s throwing. He’s been blabbing about it to everyone who asks, which is usually interpreted as a sign of confidence.

“I’m just throwing two spinnerbaits,” he said. “It’s a 1/2-ounce L’il Hustler spinnerbait, and I’m using two colors. I’ll use a perch-colored skirt with gold blades when the sun’s out, and when it’s overcast I’ll throw all chartreuse, the skirt and blade. They’ve been hitting that spinnerbait so hard all week; I’ve got bruises on my side from hitting myself with the rod because they hit it so hard.”

Kenney likely threw the chartreuse bait for the duration of his fishing Thursday since the morning was gray and rainy. The key development, though, was the lack of wind, which allowed more pros to head for largemouth waters on the lower end of the lake. Indeed, a lot more big largemouths vied for big bass on day two than on day one.

But Kenney’s sack full of 4-pound smallmouths, caught closer to Plattsburgh, was all he needed. In fact, having caught some “20 or 30” fish before 9 o’clock, it was probably more than he needed.

“The area I’m fishing is really big, and I haven’t even beaten it up yet,” he said. “I lost two big ones today, too, but it didn’t hurt, because I knew I could just throw back out there and catch another one.” 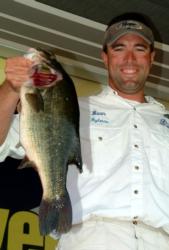 According to legend, Lake Champlain has its own version of the Loch Ness Monster. His name is “Champy.”

However, Champy might be swimming around the deep blue depths with a sore mouth tonight since Bylotas pretty much caught him today and brought him to the EverStart weigh-in scale. The pro from Olyphant, Pa., landed the day’s heaviest limit – 21 pounds even – and slid into second place, 1 ounce behind Kenney with 37-10, but it was Bylotas’ kicker fish – a 6-pound, 13-ounce largemouth bass – that caused jaws to drop.

“Yeah, that was a good one,” said Bylotas, whose other four fish were smallmouths. “I caught it on the north end of the lake on rock piles. I was just flipping a jig. It was an area where I’ve caught big fish in the past.

The near-7-pound northern bass easily won the day’s $575 Snickers Big Bass Award for Bylotas, and even he admitted that it was the fish of a career.

“I’ve caught a couple of 7s in Cayuga Lake in smaller competition, but that’s certainly a good one to have in a tournament of this size,” he said.

Larry Allard of Ware, Mass., improved on a good day-one weight and grabbed the third qualifying spot for the pros with an opening-round total of 36 pounds, 8 ounces.

Local pro Ricky Doyle of Keeseville, N.Y., switched gears with the weather and caught another good limit. He placed fourth with a weight of 36 pounds, 2 ounces.

“It was a whole new spot and a whole new thing for me today,” said Doyle, who added that he threw flukes and Senkos Thursday. “I caught all smallies today, whereas I caught all largemouths yesterday. I’m normally a largemouth fisherman, but I know a tournament like this can’t be won with largemouths alone. It was a good day.”

Pro Gerald Beck of Lexington, N.C., landed a mini-Champy of his own and placed fifth with a two-day weight of 36 pounds, 1 ounce. His 18 1/2-pound limit Thursday was buoyed by a 5-13 kicker largemouth.

“I caught them all on a Spook topwater today,” said Beck, who made the long run south to fish for Ticonderoga largemouths.

Rounding out the top 10 pros to make the opening-round cut into Friday’s competition at Lake Champlain:

All 10 of the pro finalists caught limits both days of the opening round.

Day-one leader Dana Perrotte of Winooski, Vt., held onto the top spot in the Co-angler Division by catching another decent limit Thursday and totaling 32 pounds, 8 ounces over two days.

“There were totally different conditions today,” Perrotte said. “Yesterday, we could only do what the wind let us do. Today, we were able to throw spinnerbaits and jerkbaits, then some topwaters. Once the sun came up, it was a blast. We were just mixing it up, trying to see what we could get them on.”

Second place for the co-anglers went to Rex Magargle of Turbotville, Pa., for an opening-round weight of 31 pounds, 15 ounces.

Co-angler Jason Sherwood of Germantown, Md., qualified in third place with a weight of 31 pounds, 13 ounces.

Bill Hulet of Broken Arrow, Okla., grabbed the fourth spot for the co-anglers with a weight of 31 pounds, 5 ounces.

Thomas Wilson of Ravenna, Ohio, rounded out the top five co-anglers in the opening round with a weight of 30 pounds, 8 ounces.

Like the pros, all 10 co-angler finalists caught limits both days of the opening round.

While all results are unofficial until the conclusion of the tournament, both the pro and co-angler standings races for the Northeast Division were decided Thursday.

Despite a slight stumble on day one and a late push by Leander, Texas’ Clark Wendlandt, Aaron Hastings of Middletown, Md., pushed back hard with a good limit Thursday and won the pro points title handily. Hastings – who finished no worse than 15th place in the first three Northeast tournaments of the season, including a second place at Lake Erie – had a 49-point lead on Wendlandt coming into Lake Champlain. After a 52nd-place showing here on day one, Hastings bagged a 17 1/2-pound limit on day two, finished in 30th place and slammed the door on Wendlandt, who finished this event in 16th place.

“Yesterday, all of my areas were in open water, and I just couldn’t fish them because of the wind,” Hastings said. “Today, I just fished conservatively because I was trying to win this (points title).”

On the co-angler side, Ryan Bowman of Seneca, S.C., emerged from the standings pack by finishing this event in 16th place. Ranked second coming into the event, his worst Northeast Division finish of the season was 33rd place, his best being third place at Kerr Lake. He overtook Alan Hench of Lititz, Pa., this week to win the title.

All standings point totals for the Northeast Division will be tallied at the conclusion of the Lake Champlain tournament.

Day three of Northeast Division competition at Lake Champlain begins as the semifinal-round field of 10 boats takes off from Clinton boat ramp in Plattsburgh at 6:30 a.m. Eastern time. Anglers’ weights are reset to zero for Friday, and winners in both fields are determined by the heaviest accumulated weight over the next two days.