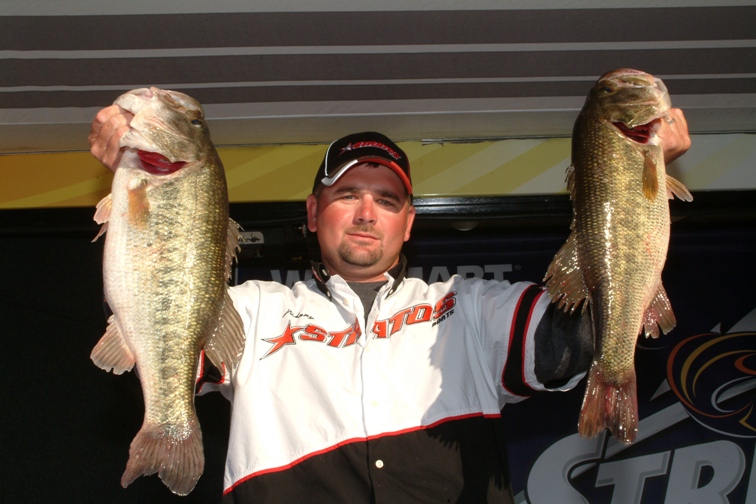 EUFAULA, Ala. – Sight-fishers got a bit of a surprise in the Stren Series Southeast event Wednesday morning when they hit their first spawning banks to discover falling lake levels had left their fish rather skittish.

Some estimated that the lake fell as few as 4 inches, while others said their areas were lacking about 8 inches of water.

And while 4 to 8 inches doesn’t sound like much, fish become ultrawary when that kind of water is taken away from beds at a depth of only 12 to 18 inches.

Despite the water drop, plenty of hefty sacks bulging with bass still got to meet tournament director Chris Jones today.

Johnny Crews of Lakeland, Fla., landed the biggest limit of the day, weighing 22 pounds to take an early lead. His string was bolstered by the day’s big bass, weighing 7 pounds, 4 ounces.

“With the water dropping, my fish became superspooky,” Crews said. “I had to stay way back and make superlong casts. There was no sight-fishing about it. If they saw you, they were gone.”

Crews is worried about the falling water level.

“If the water keeps falling, I don’t know that I’ll be able to catch them again,” he said. “The way it is now, the fish are already running around and boiling up mud at the slightest movement or disturbance.”

As a sidebar, Bobby Lane might want to consider collecting a percentage of winnings from his friends for his fishing instruction. Just weeks after Bassmaster Classic winner Luke Clausen acknowledged Lane’s help at the Lake Toho Classic, Crews was also quick to give Lane credit for his leading string today.

“I have to thank Bobby for this catch,” Crews said. “I came up here and was struggling in practice. He took me out and showed me what to look for and what to do, and it worked.”

Sam Bass of Section, Ala., had to adapt to falling water today by backing out, being

He sacked seven keepers and weighed five for 20 pounds, 13 ounces to claim second.

“I found a bunch of big fish up shallow in two areas in practice,” he said. “But today the fish in both areas had completely backed off. I don’t know if it was a drop in the water or a drop in the temperature or both, but they had definitely changed.”

Instead of panicking, Bass changed tactics a bit and discovered the fish were still in the same areas.

“It certainly was not as hot and heavy as it was in practice, but I just kept making very slow, easy passes through the area, and every now and then one of those big fish would bite.”

Patrick Pierce of Jacksonville, Fla., holds down third place with 19 pounds even.

Pierce is targeting prespawn fish and is having to cover a lot of water to get his bites.

Pierce found his pattern late yesterday and is still developing it.

“I’m fishing a lot of different areas up and down the lake,” he added. “I have a pretty good idea of what to look for, and I’m going to fish a lot of new water tomorrow. I’ve seen some other places that fit what I’m trying to do, so hopefully those will pay off.”

Bowen doing what he does best

“I’m doing what I like to do,” Bowen commented.

For those who don’t know Bowen, chances are that means he’s using a flipping stick.

“I’m covering a lot of water,” he said. “I’ll put it this way, I burned one tank of gas with my Evinrude E-Tec, and that’s a whole bunch of moving around, running and gunning. The main pattern is just to keep moving. I’m hitting a lot of little pockets and little key stretches.”

Fifth place featured a three-way tie among Ken Ellis of Bowman, S.C., Ryan Ingram of Phoenix City, Ala., and Thanh Le of Davie, Fla., each with 17 pounds, 9 ounces.

Rounding out the top 10 pros in the Stren Series Southeast Division event on Lake Eufaula:

Aaron Fahnestock of Enterprise, Ala., leads the Co-angler Division of the Stren Southeast event with an impressive 19 pounds, 4 ounces.

“It was just my day,” Fahnestock said. “It didn’t matter what I used or where I threw, a big one would get it. I caught them on spinnerbaits, Senkos, Flukes – a little bit of everything. Like my pro partner said, he could have taken me out in the middle of the channel, and I would have caught one out there. It’s been one of those special days that keeps us all fishing.”

Curt Fannin of Prestonburg, Ky., and Mike Mahady of Kennesaw, Ga., are tied for fourth place with 12 pounds, 5 ounces apiece.

Alan Hults of Gautier, Miss., is in fifth with 12 pounds, 2 ounces.

Rounding out the top 10 co-anglers in the Stren Series Southeast event on Lake Eufaula: