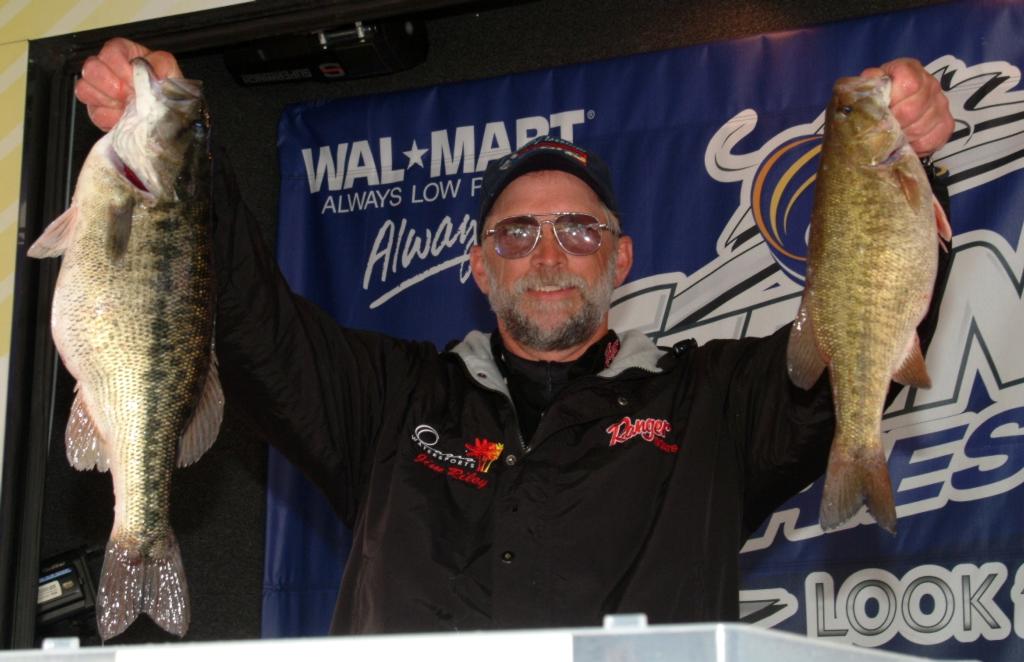 REDDING, Calif. – A record here, a record there. These Stren Series Western Division anglers have a pretty good gig going in California.

Despite cool, rainy weather to start the day, the pros and co-anglers fishing in day-one competition at Lake Shasta managed to set a new record for the number of limits weighed in by the field. Out of a nearly full field of 193 boats, the Pro Division weighed in a total of 186 five-bass limits, while the Co-angler Division saw an unheard-of 163 limits. The total, 349, unofficially set a new FLW Outdoors single-day limit record.

While they caught a bunch of them, the anglers didn’t catch a whole lot of the big, bloated largemouths that put California bass fishing on the map. (Last year, pro Sieg Taylor broke the total tournament weight record with a four-day weight of 94 pounds, 11 ounces in Western Division competition at Clear Lake – remarkably, an event that had a four-bass daily limit instead of five.) Instead, thanks to the prevailing winter transition period currently occurring in Lake Shasta, a parade of smaller spotted bass came across the scale Wednesday, as predicted. And with almost everybody catching limits, that kept the weights extremely tight. For perspective, on the pro side, the difference between 10th place and 185th place is a mere 6 pounds, 4 ounces.

For more perspective, the pro to emerge with the lead Wednesday, Jim Riley, caught a kicker fish that, by itself, weighed almost as much as that difference. Riley, a local from Shasta Lake, Calif., caught a huge spotted bass weighing 6 pounds, 3 ounces and dominated the division with a 17-pound, 1-ounce total weight. His kicker fish easily won the $700 Snickers Big Bass award on the pro side.

“That was the first fish in the livewell. I caught it on my second spot this morning,” Riley said. “It felt darn good, too. To start the day like that, it makes the rest of the day easy. Even if the rest of the bag is filled out with rats, you still feel pretty good about it.”

“Rats” – smaller, 1- or 2-pound bass, particularly of the spotted variety – were the order of the day Wednesday. Most anglers had trouble recalling how many fish they caught because there were just so many. Riley estimated that he landed about 40 fish, adding, “But most of them were rats, though.” 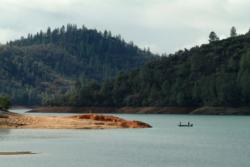 Still, after catching his big kicker fish on a swimbait, Riley filled out his limit with quality keepers by fishing deep – 30 to 50 feet – around main-lake points.

“That big one was the only bite I got on a swimbait,” he said. “I’d pull up on a point, throw the swimbait a few times, then back off and fish deep with Senkos and worms. I was lucky. I was giving my backseater (co-angler) the same fish, but he just didn’t catch as many. Tomorrow, I could catch as little as 7 pounds.”

After Riley, the pro weights on the leaderboard pretty much fell into the huge congestion of pros coming in with five 2-pound spots.

“I prefished for five days and basically found fish all over the lake,” Gray said. “But late yesterday I found an area with quality fish. I decided to start there today, and the fish were still there. I caught my limit from just two areas, and I had more weight than I thought I did.”

Gray weighed in a smallmouth to go along with his four spotted bass, saying he caught his fish deep on jigs. He said he fished “rocky areas,” but added that he didn’t want to reveal too much this early in the competition.

“I’d like to say more, but that’s what’s making the difference for me,” he said. “I searched all over the lake and only found one area that holds good fish. So that’s where I’m starting tomorrow.”

“The fish are staging, getting ready to go into the prespawn,” said Mascadri, who threw a homemade swimbait and estimated that he caught around 50 fish. “You just go to any main-lake point, and that’s where they are. Once I figured out where the bigger fish are, I just keyed on points, casting the swimbait in toward about 35 feet of water and fishing it out to about 65 feet.”

The winner of this season’s Western Division opener at Lake Havasu, John Billheimer Jr. of Discovery Bay, Calif. – at age 16, the youngest FLW Outdoors pro champion on record – proved his mettle again by catching a 12-pound, 10-ounce limit and placing fifth on day one at Lake Shasta.

“It was a pretty good day. My first fish was a 3-14, so that was a good start,” Billheimer said. “I really only have two areas going.”

The young pro said he caught his fish on brown jigs and watermelon tubes most of the day. Unlike many other top competitors who fished at depth, Billheimer claimed that he caught all of his fish in water less than 5 feet deep.

“I have been catching them deep in practice, but today I think they moved up in the rain,” he said.

Rounding out the top 10 pros after day one at Lake Shasta:

Obviously, each of the top 10 pros caught five-bass limits Wednesday.

Justin Lucas of Folsom, Calif., leads the Co-angler Division after day one at Lake Shasta with a limit weighing 11 pounds, 5 ounces.

“I just caught them on worms,” he said. “I was just throwing them out deeper than my pro was, and it worked out. It was a really nice day.”

Benny Lentz of Cottonwood, Calif., placed second for the co-anglers with a limit weighing 10 pounds, 3 ounces.

Each of the top 10 co-anglers also caught five-bass limits Wednesday.

Day two of Western Division competition at Lake Shasta begins as the field of 193 boats takes off from Bridge Bay Marina at 6:30 a.m. Pacific time Thursday for the second half of the opening round. Following tomorrow’s action, both fields will be cut to the top 20 anglers apiece based on two-day total weight.