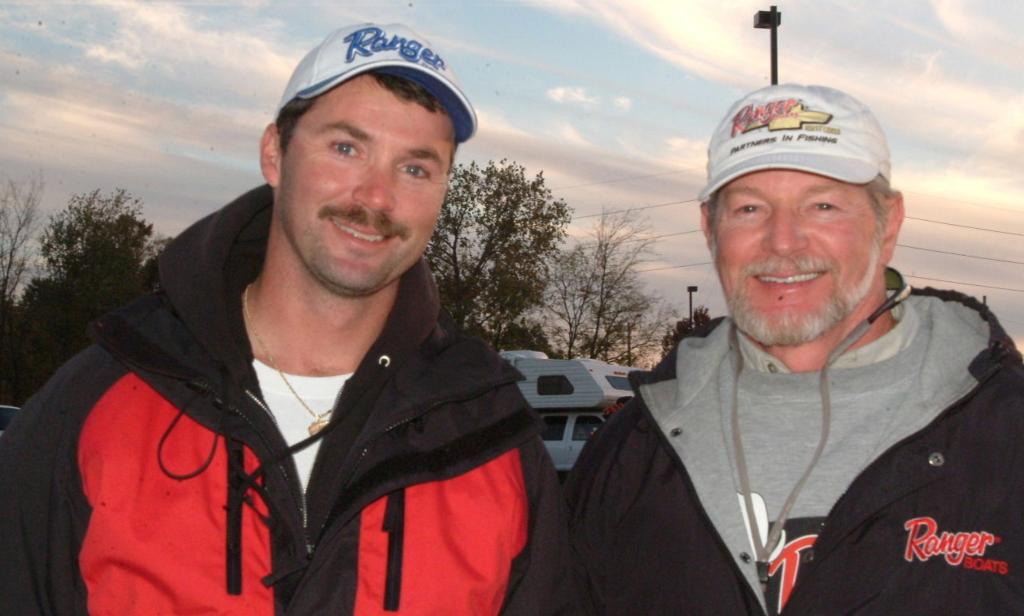 In the family way … It’s not unusual for family members to compete against each other in bass fishing, but at a championship event like this week’s tournament, the stakes are a little higher when it’s son vs. dad or brother against brother for a national fishing title. This week, brothers Alan and Matt Hults went head to head in the Co-angler Division with Alan coming out on top, as he lived to fish another day by ending the opening round in third. Bobby and Arnie Lane are another set of brothers competing this week, and though Arnie didn’t fare as well as his top-10-bound brother, you can bet Bobby was his biggest supporter this week. In fact, Bobby and Arnie are from a big family of bassers that includes father Robert and brother Chris. “I knew one day we’d all be here,” Bobby said. “I just didn’t realize we’d be fishing for this amount of money. When I caught that big one today, I thought, `I hope Arnie gets one too.’ We’re competing against each other, but not in our minds.” … Taking a slightly more competitive approach is the father-son combo of James Richardson Sr. and James Richardson Jr.. The younger beat the father this week, but it was close – Junior finished 18th on the co-angler side while Dad took 24th. “We really enjoy it,” said the elder Richardson. “We get to share a lot of information. There is a little bit of competition between us, but for the most part not. As long as he beats me, everybody’s happy.” Beat him he did, though yesterday Richardson Sr. had the upper hand, meaning he left day one with bragging rights. Today, that table turned. “It’s like a little tournament between him and me,” said Richardson Jr. “We rub each other. I came back today and beat him overall, so I got to rub him today.” At the end of the day, both father and son are each other’s biggest fans, not to mention mom Shirley Richardson, who competes in a few events herself. “Me, Mom and Dad, we help each other out,” Richardson Jr. said. “We put our heads together, and we congratulate each other.”

Two down, three to go … Thanks to their top-10 standing at this week’s Stren Series Championship, two pros have already secured a berth in the lucrative 2007 Forrest Wood Cup, an event destined to become bass fishing’s premier world championship. Representing the Stren Series Western Division is rookie pro Jason Borofka of Salinas, Calif., and advancing from the Midwest Division is living legend Stacey King of Reeds Spring, Mo. The highest-finishing qualifier from each Stren Series division at this week’s championship in both the Pro and Co-angler divisions earns a spot in the Cup, and since King and Borofka are the only pros left from their respective divisions in the top-10 cut, they automatically advanced. For King, a lauded pro with a laundry list of accomplishments, a spot in the Forrest Wood Cup is special, but for a rookie like Borofka, it’s a mind-numbing career-maker. “That was my main goal, my No. 1 thing,” Borofka said of his Forrest Wood Cup ambitions. “Being a new guy, this is amazing. I’m beyond words.” If Borofka meets contingency guidelines at the Cup, he could win $1 million if he took the title, a record-breaking prize in the sport of bass fishing. That’s a far cry from Borofka’s current humble standing. “This week I’ve been living off hot dogs and a 30-pound catfish my buddy caught,” said Borofka, who is a bellman by day in California when he’s not out qualifying for elite championships. “I almost had to quit my job to come here.” If he wins the million dollars next year on Lake Ouachita, will he keep his bellman’s hat? “I will definitely quit,” he said. … King’s FLW Outdoors career is relatively young, but his name is well-known in the bass-fishing ranks for his storied BASS career, which includes 12 Bassmaster Classic appearances. Like the young Borofka, making the Forrest Wood Cup was the veteran’s goal for 2006. “I’m just thrilled,” King said. “I knew it was a long shot with 39 other guys here from my division. This takes a lot of pressure off at the last Wal-Mart FLW Series (event). I’m looking forward to fishing (the Cup) – I’ve done well on Ouachita in the past.” … The qualifying pros from the Southeast, Northeast and Central divisions will be announced following Saturday’s weigh-in, as there are still multiple competitors from those divisions in the top 10.

Co-anglers qualify … Two co-anglers also fished their way into the 2007 Forrest Wood Cup via the Stren Series Championship. Daniel Shuga of Botkins, Ohio, is the lone Midwest Division co-angler in the top 10, automatically qualifying him for the event. Jason Billmaier of Las Vegas will represent the Western Division at the Forrest Wood Cup thanks to his seventh-place performance in the opening round of the Stren Series Championship. Three more co-anglers will qualify tomorrow.

Freak of nature … It is probably true that nobody can spin a yarn like a fisherman. But Georgia co-angler Richard Mitchell truly did catch a remarkable fish today, though it wasn’t memorable because of its size. The fish was, for lack of a better word, curvy. “That’s the ugliest fish I ever caught,” Mitchell said. But with no bass in the boat at the time he brought in the odd-looking fish, he figured beggars can’t be choosers. “I just thought, `I’m happy to have a fish!'” Mitchell said. But keeping the fishermen’s storytelling reputation alive, Mitchell claimed that it was so cold this morning that when the fish jumped, it froze like that. True, it was cold – but not that cold.

Friendly fire … Florida pro J.T. Kenney slipped into the cut in the No. 10 position, meaning he’ll compete for the Stren Series Championship title against his good friend and roommate Bobby Lane, who is currently in second place on the pro side. While some might have a tough time rooming with the direct competition, Kenney and Lane actually kind of enjoy it. “We don’t even care,” Kenney laughed. “We just have a good time. We’re both in a much better mood if we make the cut. There are a lot more chuckles in the room.” So no knock-down drag-outs if one and not the other takes home the big check? Not for Kenney and Lane. But it can present its challenges, mainly in that Kenney and Lane aren’t typically in the habit of sharing information. “It’s probably kind of hard to practice with someone and room with them,” Lane admitted. “I hadn’t told him where I caught them. But if one of us is struggling, we’ll help each other. We’re friends.” … Indeed, yesterday Kenney caught his bass in the Decatur Flats, which today’s winds rendered useless. He then went up the river, only to find himself in Lane’s fishing hole – a total coincidence. Great minds must definitely think alike.

Top-10 shakeup … While yesterday’s top five stayed in the top five (though No. 4 Dave Lefebre and No. 3 Ricky Scott switched positions), the bottom half of yesterday’s top 10 didn’t fare so well. None of yesterday’s sixth- through 10th-place pros made the final top-10 cut, with yesterday’s No. 9 Mike Hoskings falling farthest, dropping to 67th. To blame? The weather, of course. Wednesday’s rain but relatively warm temperatures turned to sunshine and much colder conditions today, and the wind didn’t help at all, particulary those who were fishing the bass-rich but grassy Decatur Flats. And though the top five retained their leading status, all of their weights fell considerably today, with Sam Bass keeping his lead despite catching only 4 pounds, 8 ounces today. “I really didn’t lay off of them; I got blown off of them,” Bass said. Tied for ninth place yesterday was Ben Kurtz, and he fell to 52nd. “I think it was the cold front that came through,” Kurtz said. “I really couldn’t get it done today.”

Taking the shortcut … Making the Stren Series Championship is something hundreds, if not thousands, of anglers work toward all year long. But two pros made it look almost easy, cruising into the championship despite not even fishing the entire four-event schedule. Vic Vatalaro made his presence known in a big way this year in the Northeast Division, even winning the Lake Erie event in July. He slid into the championship in the final qualifying position – 40th – to become one of the two who fished their way here in only three events. He ultimately finished 64th. Faring a little better is the other pro to take the short route here – Ohio’s Charlie Hartley, who finished the week in the 19th position. Hartley was the 27th-ranked Northeast Division angler in 2006 thanks to three solid performances, including a fourth-place run on Lake Champlain in September. Getting to the Stren Series Championship is no easy feat, but for pros as solid as Vatalaro and Hartley, it’s in the bag.

89: Day-one finish of No. 6 pro Ott Defoe, who came from the farthest behind to advance into the top 10.

2: Number of bass caught on day two by both Bass and Bobby Lane, who nevertheless managed to maintain their No. 1 and No. 2 status.

851: Number of fish caught by pros and co-anglers on day two.

119: Number of five-bass limits caught on day one by pros and co-anglers.

78: Number of five-bass limits caught on day two by pros and co-anglers.

Tomorrow’s takeoff is scheduled to take place at 7 a.m. CST at Ingalls Harbor, located off Highway 20 in Decatur.