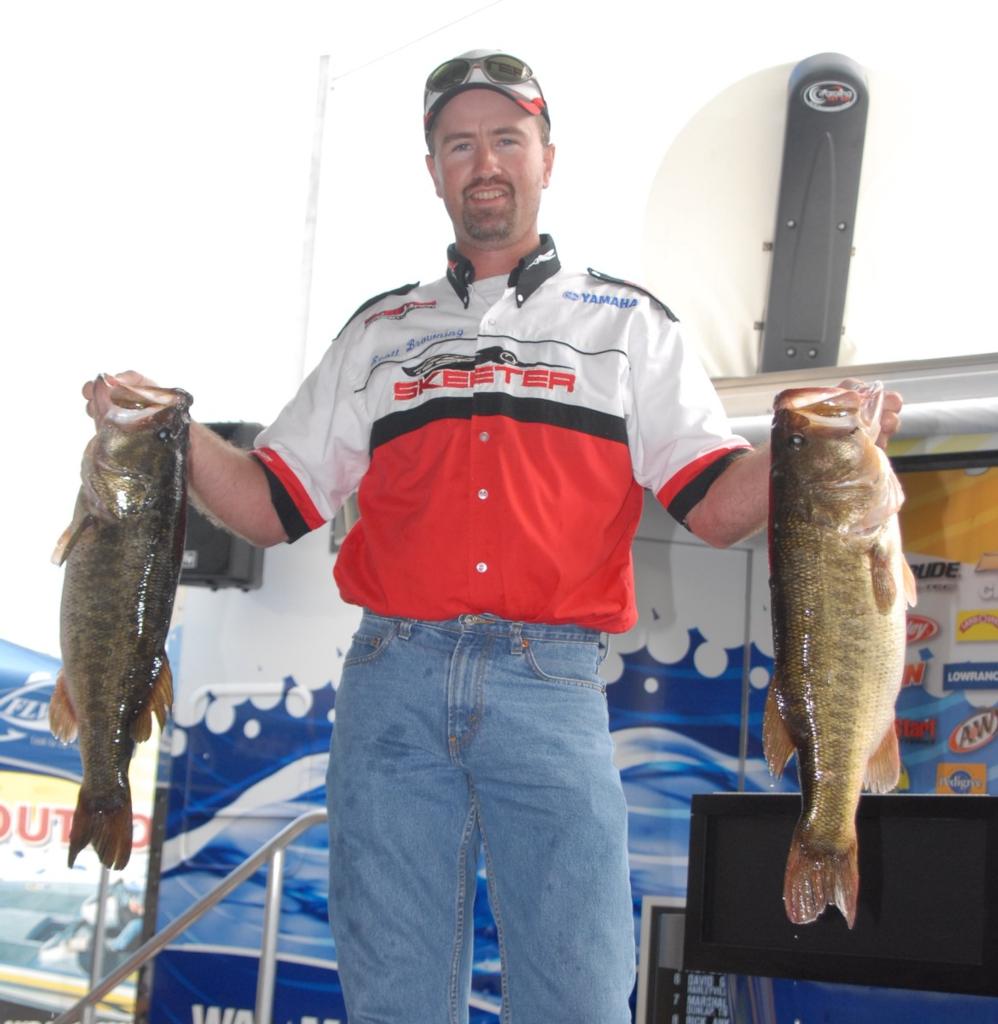 OKEECHOBEE, Fla. – Lake Okeechobee delivered oodles of five-bass limits on day one of the Stren Series Southeast Division event, but the line of big fish that normally parades across the stage at the opener was a little short.

Some anglers are reasoning that lower water levels have left the thick vegetative mats, which usually congregate the big females, high and dry. Meanwhile, the smaller, more aggressive buck bass have funneled into the shallows, and they are eating anything and everything.

While 8- to 11-pound limits were plentiful, what is currently separating the leaders from the middle of the pack is one big bite in the 6- to 9-pound class.

In the case of tournament leader Scott Browning of Franklin, N.C., not one, but two big bites are the reasons he leads the Stren Southeast event with 21 pounds, 13 ounces.

“I’m pretty sure these are prespawn females moving in from the big water,” Browning said of his kickers. “The big ones have that blanched-out white color to them. The shallower males in the area have been there for a while, and they’ve got that deep green coloration.”

Browning attributed much of his success today to not using his trolling motor.

“The big females are ultraskittish in this shallow water. I’m making long casts to the scattered stuff and superlong pitches to the thicker stuff. I’m drifting through my main areas without using my trolling motor at all. I have to play the wind: set up my drift according to wind direction so I can drift through at just the right angle without using the trolling motor.”

Tony Hogan of McDavid, Fla., has started the event in second place with a five-bass

“It’s all about the area,” Hogan said. “A friend of mine from down here told me a long time ago that in order to do good on this lake this time of year, you have to find clear water and fish with white bellies – ones that are just moving up out of the main lake – and I’ve finally found a place like that.”

Hogan found his best spot on Saturday and says it has gotten better each day.

“This area is one of those classic funneling spots, where fish come in from the main lake and rest a day or so before going on the nest,” he added. “I only fished it for about an hour this morning, caught six bass and left. I really don’t know how many fish are in there, or even how long it will hold up. But I’m definitely trying to manage them in hopes that they’ll last another few days.”

2005 Stren Series Okeechobee winner Justin Schwier of Okeechobee, Fla., has put himself in position for a repeat win on his home lake by taking third place with five bass for 18 pounds.

Unlike other leaders fishing shallow, Schwier is banking on the depths of a canal.

“I’m Carolina rigging a canal in about 16 feet of water,” Schwier said. “I live on a canal over here, and I know the canal systems pretty well. I know where key features like breaks and rock piles are located.”

But Schwier does not have all his eggs in the canal basket.

“I pretty much burned that spot up today,” he said. “There were some other boats in there, and I didn’t want to leave anything behind, so I got all I could get. I’ve got some other places like it, and hopefully I can ride them to Saturday. I’m trying to save one little shallow spot for the last couple of days. It’s too muddy right now, but if the water clears up in there over the next few days, it could be pretty good, so I’m keeping my fingers crossed.”

Williams believes his fish are actually spawning due to the fact that he is catching them off isolated pieces of cover.

“I fished a lot of these single pieces, clumps and strands in practice and caught small bucks off them,” he said. “When I went back to those places today, it seemed like the big girls had moved in on some of them. I did go to a much bigger bait than I had been using in practice, so that might have something to do with it as well.” 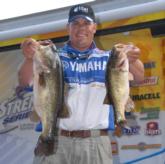 Sometimes pro anglers find a bait they like so much, they just can’t put it down. Such is the case with Chris Lane of Winter Haven, Fla., who has fallen in love with Gambler’s Cane Toad.

Lane used the topwater toad to win a BASS event on Okeechobee last January, and he has had the plastic buzzer tied on his rod ever since.

“I guess it’s like Brauer and his jig or Fritts and his crankbait; once you find a confidence lure like that, it stays at the top of your arsenal,” Lane commented. “I’ve caught fish on the Cane Toad all over the country; I just love it.”

Lane is using the Cane Toad to cover a lot of water on Okeechobee.

“I’m staying on the move and sticking with it,” he said. “In practice they were biting it real good earlier in the mornings, but today it didn’t turn on until about noon. I had to be persistent and keep moving, but it finally worked.”

Even though Okeechobee was a little stingy with the lunkers today, it did surrender a few trophies. Ken Ellis of Bowman, S.C., landed a 9-pounder to take the day-one Snickers Big Bass honors.

“I had a good guide: Travis Adams of Georgia,” Allen said. “I lost a couple of fish this morning, then I switched to a 7 1/2-foot rod with plenty of backbone, and from that point on, I landed everything that bit.”

In third place is Michael McCoy of Jupiter, Fla., with five bass for 15 pounds, 2 ounces.

Ralph Myhlhousen of Orlando, Fla., is in fourth place with a limit weighing 13 pounds, 6 ounces, and Tony Arnold of Greenback, Tenn., is in fifth place with 11 pounds, 4 ounces.