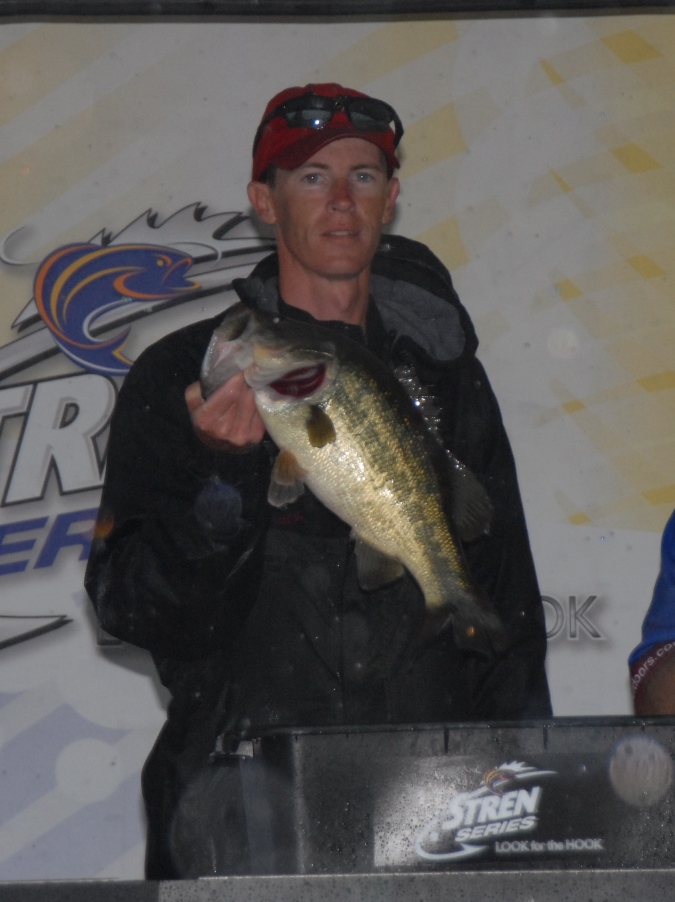 The weigh-in was not spared from the deluge either, as heavy downpours roared over the weigh-in stage until the last fish was counted.

When Clark Smith of Pell City, Ala., who was tied for the lead after day one, took the soaked stage, he broke away from the pack as the tournament leader with a two-day total of 29 pounds.

Smith brought in four bass today for 11 pounds, 6 ounces to assume more than a 2-pound lead.

He did not return to his hot spot from yesterday that produced 17 pounds, 10 ounces in an hour’s time. Instead, he went in search of new water.

“The way I’m fishing is a lot like the way I fish on Lake Guntersville,” the Alabama native said. “I’m cranking offshore grass beds. I decided to fish different water today to see if I could expand on what I’m doing without going to my best spot from yesterday, and it worked out. I really want to stay off that best spot until I really need it.”

Unlike yesterday when Smith caught his fish quick, he noted that Thursday his bites were spread throughout the day.

“There was nothing fast and furious about it today,” he added. “I just kept grinding away until something bit.”

Tony Davis of Williston, Fla., moved into the second-place position today with a

His primary spot is deep water adjacent to spawning flats, and he is managing his fish in hopes that they will last four days.

“I caught what I weighed by 11 o’ clock this morning,” Davis said. “After that, I left them to try some other areas. The bite in there is slow and steady, but I think there are still some fish left. I’m hoping if I don’t pressure it too much, other fish will move in and help it replenish.”

Mike Cox of Huntsville, Ala., flipped up one bass weighing 6 pounds, 9 ounces to hold on to third place with a two-day total of 24 pounds, 2 ounces.

“I only had two bites today,” Cox said. “I boated one and lost the other one.”

Cox is flipping bank reeds, but only has four or five key stretches with which to work.

“The only key I’ve been able to put together with my limited number of bites is there has to be some deep water running up along the reeds. There are not many places like that, so I’m just fishing them real slow. I figure I need just two or three bites to stay in the top 10 tomorrow, so I’m going to stick with it.”

Weighing in the biggest limit of the tournament so far – 19 pounds, 7 ounces – was 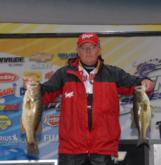 Lonnie Oneal of Valdosta, Ga., who jumped into fourth place with a two-day total of 23 pounds, 15 ounces.

Oneal fished the same area as he did yesterday, but he switched tactics to dial in on them today.

“I’m fishing a backwater oxbow-type pond that has a bunch of fish in it,” Oneal explained. “For the last two weeks, I’ve been catching them cranking. Yesterday, they wouldn’t hit a crankbait, I guess because the water got so cold. So today I switched up and started fishing a lot slower, and that was the ticket. The fish were still there, they just wanted something different than a crankbait.”

Jesse Draime of Long Beach, Miss., moved into the fifth spot today with a two-day total of 23 pounds, 8 ounces.

Draime is cranking long tapering points in about 10 feet of water that run off flats.

“These fish bite in short spurts,” Draime noted. “I’ll go for a couple of hours without a bite, catch one, throw right back in the same spot, catch another one – and sometimes even catch a third one – then that will be it for a long time. There is no magic to it. I just have to keep chucking and winding until I get a bite, and then there’s usually one or two more with it.”

Rounding out the top 10 in the Pro Division:

Jason Waddell of Louisville, Ala., zeroed yesterday, but rallied today with a four-bass catch weighing 13 pounds, 7 ounces to move into second place.

Day-one leader Jimmy Anderson of Davie, Fla., is in third with his day-one catch of 13 pounds, 2 ounces.

Tom Burks of Avon, Ind., now sits in fourth place thanks to catching the Co-angler Division Snickers Big Bass of the day weighing 8 pounds, 6 ounces. He has a two-day total of 12 pounds, 12 ounces.

Frank Mackin of Tarpon Springs, Fla., is in fifth place with a two-day total of 12 pounds, 12 ounces.

Rounding out the top 10 in the Co-angler Division:

Day-three competition begins at 7:30 a.m. EST at the Earle May Boat Basin in Bainbridge, Ga.