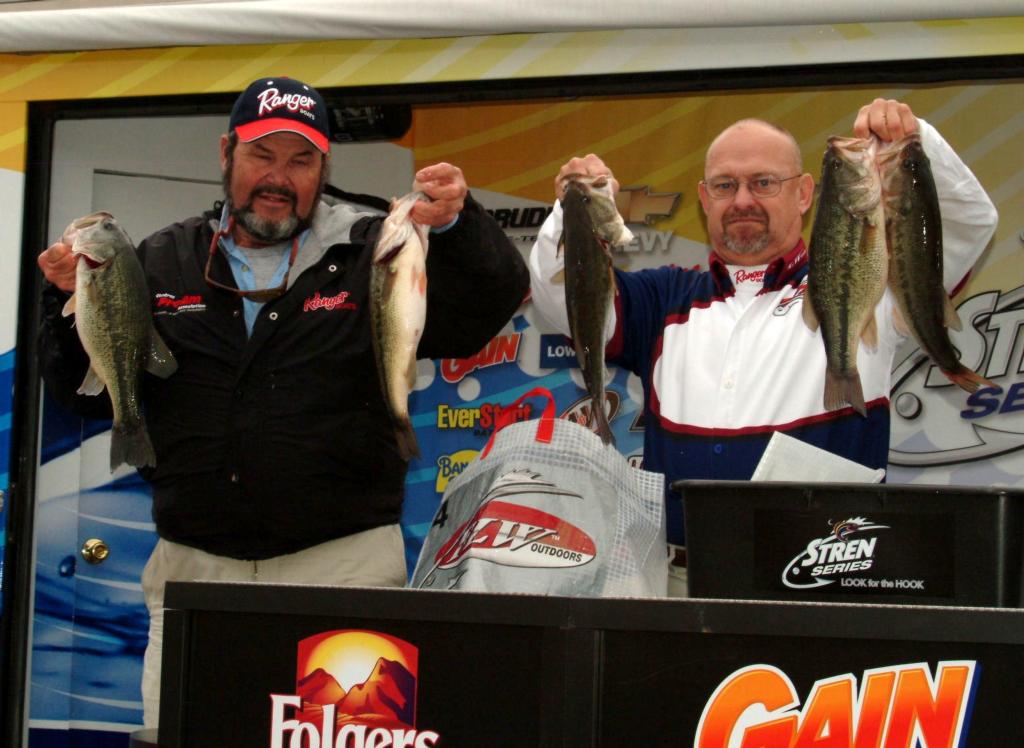 BULL SHOALS, Ark. – Just as predicted, slow fishing dominated the dock talk on day one of the season-opening Stren Series Central Division event on Bull Shoals Lake. The warm, windy conditions all but killed the deep finesse bite, but a select few found success by pounding main-lake points with a variety of hardbaits.

Only 99 pros and 50 co-anglers brought fish to the scale Wednesday. Not a single co-angler registered a five-bass limit, and only 18 pros filled out their tournament creel. The few that did have success on day one could be in good shape, as severe thunderstorms are in the forecast tonight and tomorrow morning.

Hutson’s leading stringer consisted of five identical 3-pound bass. The pro, who calls nearby Table Rock Lake home, caught a total of 10 keepers and described the bite as “pretty consistent.” The fish that he weighed were all largemouths, but he also caught a few spotted bass and a few smallmouths. His key bait is a Smithwick Rogue jerkbait, which he casts up to the edge of the bank.

“If the wind doesn’t blow, I may be in trouble,” said the Washburn, Mo., pro. “The early lead means a lot, but the problem is that there are three more days.”

Tomorrow’s stormy forecast suits Hutson just fine, but the clear, cold weather behind it has him scared.

“I’m afraid that type of weather might murder me.”

If that is indeed the case, Hutson says he’ll adjust and fish deep water with a small jig and light line. Even the idea of finesse fishing makes him cringe, knowing all too well his catch won’t even come close to Wednesday’s 15-14. 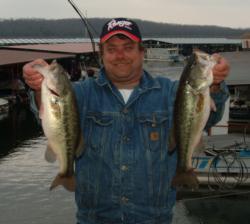 While Maurer found the day-one honeyhole, located in approximately 18 feet of water, Shay was the one who discovered the hot bait. In fact, Maurer had actually gone four consecutive practice days without a bite.

“I just told myself that I was going to put the trolling motor down and start fishing new water,” said the Ledbetter, Ky., native.

Maurer first threw a Chompers jig, but he quickly changed after Shay started catching fish. After tying on a Lucky Craft jerkbait, Maurer too started getting bit. 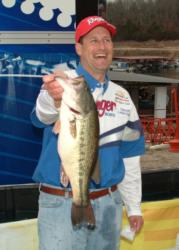 “I caught six fish today, and every one of them was a keeper,” said Cochran, who was done by 1 p.m. “I just hope I can go out there tomorrow and catch five. That big fish really helped.”

Much like the others near the top of the leaderboard, Cochran used crankbaits and jerkbaits, fished in 6 to 10 feet of water. His limit included three largemouths and two spotted bass. 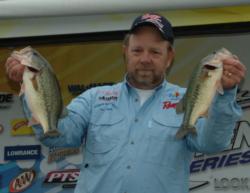 Stu Moyer of Indianapolis has had a difficult week. Not because his fish wouldn’t bite in practice, but because his brother-in-law passed away this past Sunday. Moyer drove all the way to Mississippi for services and then back home to Indianapolis to be with his family. He finally made it back to the Ranger Boats facility in Flippin, Ark., Tuesday night with only a few minutes left of registration.

From there, things improved considerably. On his third cast this morning, Moyer caught his biggest fish of the day. In total, he boated seven keepers and had his 12-pound, 10-ounce limit filled out in an hour and 10 minutes.

“I can’t believe that the day went so well,” said Moyer, who fished shallow points with hardbaits. “It’s been a hard week, and it’s just really nice to enjoy a day of fishing.” 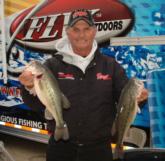 Tim Fleetwood of Forsyth, Mo., and Jerry Weisinger of Wyandotte, Okla., rounded out the top five in the Pro Division with limits weighing 12 pounds, 4 ounces.

Fleetwood caught his fish near main-lake channels with a Tim Hughes custom jerkbait.

“My goal was 10 pounds a day,” said Fleetwood, who considers Bull Shoals his home lake. “But with this weather, I may have to go fish my best area tomorrow.” 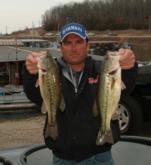 Weisinger caught six keepers on a variety of baits including a jig, a jerkbait and a Wiggle Wart crankbait.

Rounding out the top 10 pros after day one on Bull Shoals Lake:

Besides Davis, who caught four bass, each of the top 10 pros caught limits Wednesday. 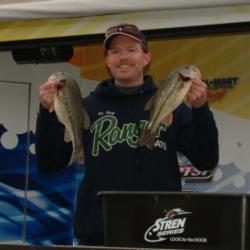 Competing in his first Stren Series event and his first FLW Outdoors tournament since 2003, the Chesterfield, Mo., co-angler caught four bass weighing 10 pounds, 2 ounces to lead day one on Bull Shoals. Three of those were largemouth bass, one a Kentucky.

“I had a blast,” said Shay. “At one point I had my partner 3-to-1. We just went out with an open mind. We figured something out, and then we were able to expand on it.”

“I’m just sort of in a state of shock. Considering where we started with our conversations last night to where we are now, I just feel blessed.” 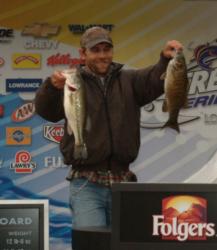 Local fisherman Steven McFarland of Mountain Home, Ark., tied for second among the co-anglers with Barney Moore of Johnston City, Ill. Both anglers brought 6 pounds, 4 ounces to the scale. McFarland managed his weight with two fish, including one smallmouth, while Moore caught three keepers. 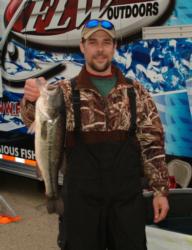 The Snickers Big Bass award in the Co-angler Division went to Kevin McKnight of Versailles, Mo. That single fish weighed 4 pounds, 13 ounces, placed him fifth and was worth $131.

Rounding out the top 10 co-anglers after day one on Bull Shoals Lake: