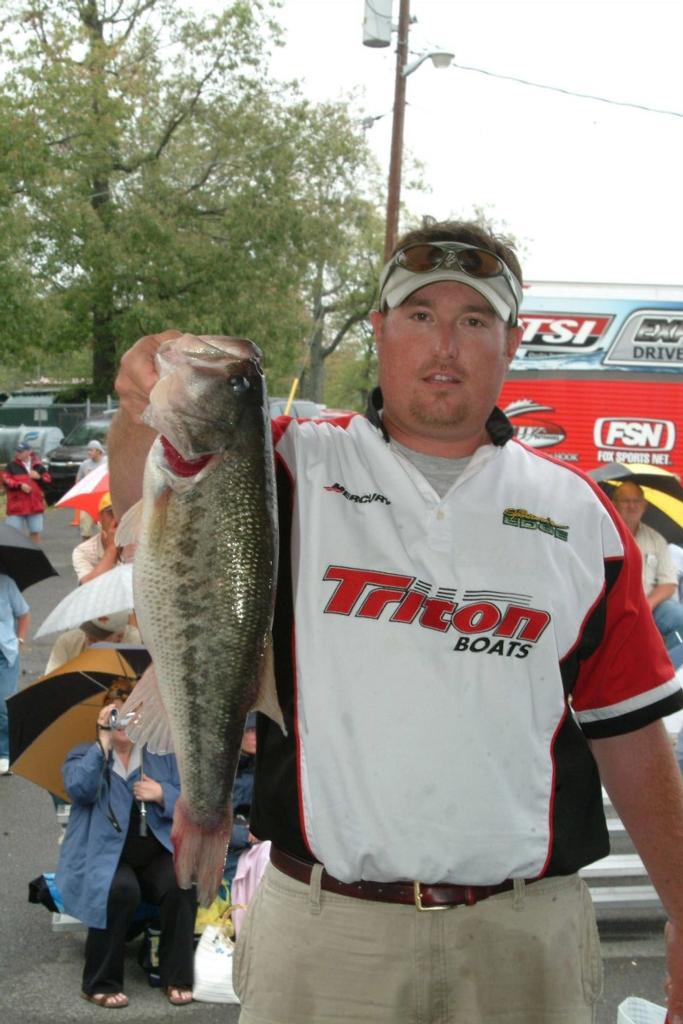 BENTON, Ky. – As a few brave souls withstood a steady downpour at the day-one weigh-in of the Stren Series Central Division event on Kentucky Lake, many competitors were thankful to see the rain fall, as the cloud cover seemed to help the majority of anglers.

Usually, the Stren Central event here is held a few weeks later in the summer, meaning typically, the locals dominate a deep-water ledge bite. That was not so much the case today on the second day of May, as shallow seems to be where it’s at, though a local, Andy Hodges of Cadiz, Ky., does sit atop the leaderboard.

This is Hodges’ first Stren Series event, and he leads the Pro Division with a five-bass limit that weighed 19 pounds, 9 ounces. He has four top-10 Wal-Mart Bass Fishing League finishes on Kentucky-Barkley, and indeed he fished Lake Barkley today.

“The fish are scattered anywhere from 6 inches to 4 feet of water,” Hodges said, adding that unlike many, he is not sight-fishing. That’s right, sight-fishing – the clouds did not deter several top anglers from that pattern today. In fact, in Hodges’ case, the clouds seemed to help.

“(The weather) helped the shallow-water bite,” he said. “The fish seemed a little more active. They were looking for food with that cloud cover.”

Hodges used his local knowledge to land eight keepers today. All were largemouths.

McGuire close behind in second 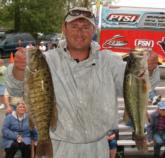 With a limit weighing 19 pounds, 8 ounces – just 1 ounce behind the leader – Curt McGuire of Lawrenceburg, Tenn., ended the day in the No. 2 spot. McGuire finished second in this event just two years ago.

While Hodges and some other pros were pleased with today’s weather, McGuire struggled a bit.

“It was pretty tough, the way I’m fishing,” he said. “They’re scattered. I wouldn’t call it deep, but I’m fishing out, and they’re all postspawn fish.”

Unfortunately for McGuire, tomorrow’s forecasts are calling for more rain and clouds – even a few thundershowers.

“That’s probably not going to help,” he said. “It is going to be tough for me to have enough fish for four days.”

No. 3 pro Chris Rand of Fort Lauderdale, Fla., set the mark pretty high today as the first angler to weigh in with a limit totaling 19 pounds, 2 ounces.

“I started out with a limit of spots, and I culled up to those five largemouths,” he said.

Rand’s heaviest bass weighed 6 pounds, 8 ounces, and his hefty limit is all the more remarkable considering he was fishing out of a borrowed boat that didn’t hold up all that well.

“It was trying to sink me,” he said. “I caught those two big ones, and it made my day.”

In fourth place with five bass weighing 18 pounds, 12 ounces is Mark Goines of Shady Point, Okla. Goines was one of a few pros who reported catching their bass sight-fishing despite the gloomy conditions.

“Some of them I’m looking at, and I’ve got a few fish in the bushes I think I can catch,” Goines said. “I caught my limit today and went around looking.”

In addition to sight-fishing, Goines said he also caught fish today flipping. He caught largemouths out of Kentucky Lake today.

“The only bad thing about the cloudy weather is it’s hard to see the fish,” he said. “I need the sun (for) flipping too.” 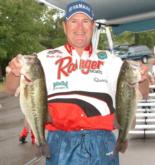 In fifth place is Charlie King of Shreveport, La., with a limit weighing 18 pounds, 7 ounces.

Rounding out the top 10 pros after day one on Kentucky-Barkley: 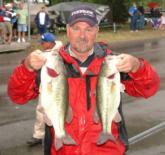 With a hefty five-bass limit clocking in at 16 pounds, 13 ounces, Stephen Smith of Glenwood, Ark., led the Co-angler Division on day one. His heaviest bass of the day weighed in at 6 pounds, 1 ounce.

Smith and his pro partner, Ralph Laster Jr., fished Barkley today, and in his words, the weather was “perfect.”

“(Laster) was around high-quality fish, and he allowed me to fish,” Smith said. “That made all the difference – that, and I got the bites. This is just the best fishery. It’s one of my favorites, if not my favorite.”

In second on the co-angler side is Michael Radake of Cape Girardeau, Mo., with a five-bass limit weighing 15 pounds, 9 ounces. He reported catching his bass today shallow on plastic worms.

“I caught nine keepers, all largemouths,” he said. “The cloud cover probably helped – it kept them shallow.”

Behind him in third is Kenneth Shaw of Caledonia, Miss., with a five-bass catch weighing 14 pounds, 7 ounces.

In fourth place is James Plummer of Fairborn, Ohio, with a limit weighing 14 pounds, 3 ounces.

Behind him in fifth is Mike Sears of Fayetteville, Ark., with a five-bass catch that weighed 13 pounds, 11 ounces.

“The fish were biting good,” Sears said. “I caught them pretty shallow all day, and I caught fish all day long.”

Sears said he was fishing Kentucky Lake in 6 feet of water or less.

“I think today (the weather) worked in our favor,” he said. “It kept them active all day.”

Rounding out the top 10 co-anglers after day one on Kentucky-Barkley:

Tomorrow’s takeoff commences at 6:30 a.m. CDT from Moors Resort and Marina, located at 570 Moors Road in Gilbertsville, Ky. Tomorrow’s weigh-in will also be held at Moors beginning at 3 p.m. CDT.