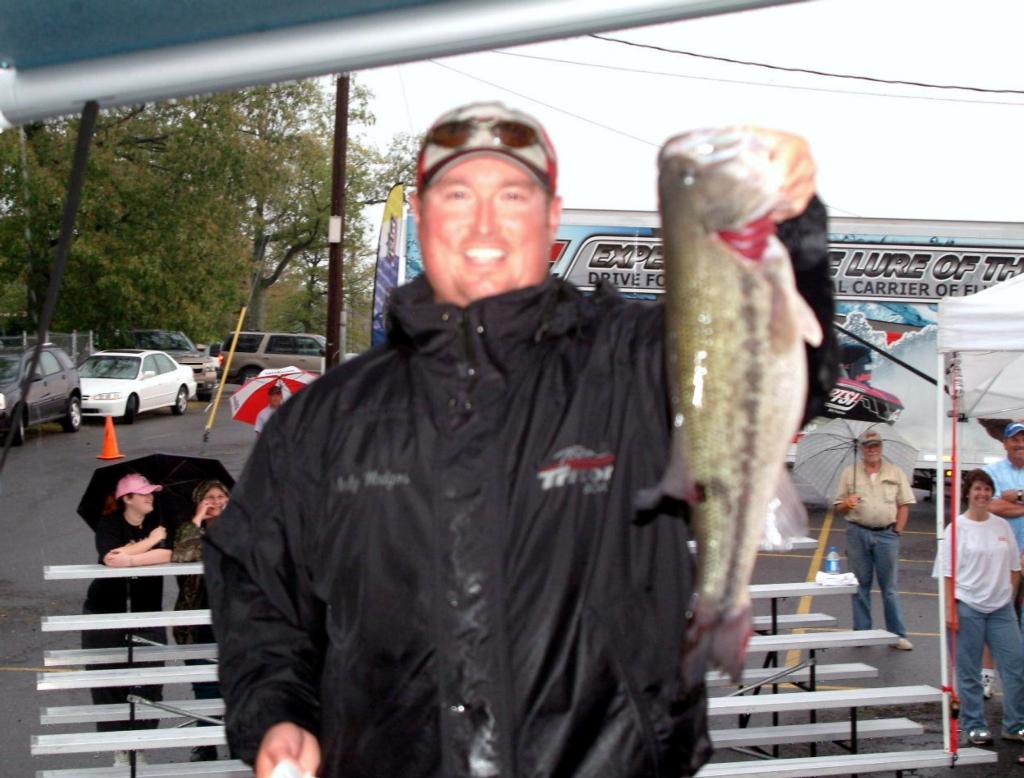 BENTON, Ky. – Overall weights fell like the rain that pelted competitors and spectators on day two of the Stren Series Central Division event on Kentucky Lake. And while a few anglers left Moors Resort and Marina disappointed today, there were still some solid catches with no change at the top, as Andy Hodges of Cadiz continues his reign for a second straight day.

Hodges followed up his leading day-one weight of 19-9 with another limit that weighed 22 pounds, 1 ounce that brought his two-day total to 41 pounds, 10 ounces. His day-two stringer also clocked in as the heaviest stringer of the tournament so far. With his day-two improvement, Hodges extended his lead over No. 2 Curt McGuire from 1 ounce to 3 pounds, 2 ounces.

Striking fear in the hearts of those behind him is not only the fact that Hodges has years’ worth of local knowledge but also his on-stage claim that he learned a few things today that he believes will help him the final two days of competition.

“I struggled early,” Hodges said of his day-two performance. “I caught bigger fish today but not as many. They had moved.”

Yesterday was indeed a different experience for Hodges, as he quit fishing at 10:30 on day one but found himself in a quandary at about that time today.

“I only caught one keeper on the places I fished yesterday,” he said. “At 11 o’clock, I had to do some running and searching.”

He fished Lake Barkley yesterday but today relied on both lakes to catch his bass, all of which were largemouths. He reported catching bass anywhere from 1 to 4 feet of water.

McGuire holds on to second

Behind Hodges in the No. 2 position is yesterday’s second-place pro Curt McGuire of Lawrenceburg, Tenn. McGuire’s day-one catch of 19-8 was followed up today with a limit weighing 19 pounds for a two-day total of 38 pounds, 8 ounces.

McGuire hinted yesterday that the cloudy weather wasn’t doing him any favors, but he didn’t let today’s clouds and storms keep him from bringing in another big stringer.

“It was a little slower,” he said. “It took me all day to catch my fish. I guess I caught too many of them yesterday. I can catch a bunch of keepers, but good ones are hard to come by.”

Indeed, McGuire said he has yet to catch a single bass that weighs as much as 5 pounds, though all of his fish are Kentucky Lake largemouths. As for his chances the next couple of days, McGuire is cautiously optimistic. 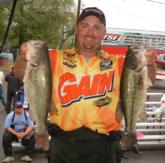 With a five-bass stringer weighing 21 pounds, 8 ounces, Koby Kreiger of Okeechobee, Fla., claimed one of the heaviest catches of the tournament so far and jumped 17 spots up the leaderboard in the process. Combined with his day-one catch of 15-15, Kreiger’s two-day total clocked in at 37 pounds, 7 ounces to end the day in third.

“Today, everything was perfect,” Kreiger said. “I didn’t lose any big ones. Yesterday I lost two big ones.”

Kreiger’s limit included a 5-pound, 7-ounce kicker, and he reported using as many as three different methods to land his bass today out of Kentucky Lake.

“I’m doing two or three different things, so if the weather changes, I can change,” he said. “I’m sight-fishing, throwing a jig or throwing a topwater – it depends on where I’m fishing.”

Kreiger has several top-10 finishes here, including a 2001 Stren Series win, which is saying something considering he’s a Florida pro by way of Indiana.

“It’s just the time of year,” says Kreiger in explanation of his Kentucky success. “A little later in the year I struggle. The fish are up spawning shallow, and I’m doing what I like to do.”

King moves up one spot to fourth

Yesterday’s No. 5 pro Charlie King of Shreveport, La., moved up one spot today to fourth with a two-day total weight of 33 pounds, 10 ounces. His day-one catch of 18-7 was followed up today with a limit weighing 15-3.

“I’m catching a lot of fish, but I have to wade through a lot of little ones to get to the big ones,” King said. “I feel good. I have not made two passes on my good fish in two days. Everywhere I go, I’m catching fish.”

King says he’s pitching soft plastics in shallow water on Kentucky Lake, and as far as the weather is concerned, bring on the rain.

“The weather has been great,” he said. “The little showers that come through actually help me.”

Rain is expected to fall again tomorrow, with a few thunderstorms likely.

Local pro Britt Cone of Benton jumped from 28th to fifth today with a five-bass limit weighing 18 pounds, 2 ounces. That catch combined with his day-one limit of 14-13 brought his two-day total to 32 pounds, 15 ounces.

“Today was better,” he said. “It’s been slow. I only got seven keeper bites all day long. I just have to fish really slowly.”

As expected, Cone is fishing Kentucky Lake to land his bass.

Like King, Cone is undeterred by the falling rain and hovering clouds.

“It was cloudy yesterday and cloudy again today, and I don’t think it’s bothering me,” he said.

Rounding out the top 10 pros after day two on Kentucky/Barkley:

Once again leading the Co-angler Division is Stephen Smith of Glenwood, Ark., with a two-day total of 28 pounds. His leading day-one catch of 16-13 was followed up today with a limit weighing 11 pounds, 3 ounces that gave him a scant 4-ounce lead over his nearest competition.

Smith fished with No. 7 pro Powers today and credited much of his success to him.

“I’ve really been lucky,” Smith said. “I’ve had good partners. It was an awesome day. He’s fishing different, but I stayed at it all day.”

“I hope I can catch them tomorrow,” he said. “It’s hard to do that three days in a row.” 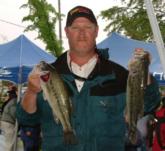 In the No. 2 spot on the co-angler side is James Plummer of Fairborn, Ohio. He caught 14 pounds, 3 ounces yesterday and caught a limit today worth 13-9 for a two-day total of 27 pounds, 12 ounces.

In third place is Barry Baldwin of Dayton, Ohio, with a two-day catch of 27 pounds, 7 ounces. He improved his weight today, following up his day-one catch of 11-11 with a limit weighing 15-12.

“I had my limit by 9, and it just got better all day,” Baldwin said. “I probably culled six or seven times.”

Baldwin credited his success with the technique he is using, which he says is different than what most people are doing.

“We started on Kentucky Lake and then went to Barkley,” he said, adding he fished shallow water today with Brush Hogs and lizards.

Newsom, Sears round out top five

In fourth place is Keith Newsom of Memphis, Tenn., with 25 pounds, 12 ounces of bass over two days.

“I had a great partner with Jerry (McKinnis),” Sears said. “If I can draw out good tomorrow, I can fish on Saturday.”

“We just kept on grinding, sorting through the smaller fish,” he said. “We caught five apiece. They were not as big as yesterday’s, but I was hoping to get 9 or 10 pounds, and I wound up with 11.”

He was fishing Lake Barkley in 3 feet of water or less.

Rounding out the top 10 co-anglers after day two on Kentucky/Barkley:

Tomorrow’s takeoff commences at 6:30 a.m. CDT from Moors Resort and Marina, located at 570 Moors Road in Gilbertsville, Ky. Tomorrow’s weigh-in will also be held at Moors beginning at 3 p.m. CDT.

Following tomorrow’s weigh-in, the field will be cut to the top 10 pros and co-anglers who will continue competition on Saturday. This week’s winners will be determined by heaviest four-day weights.