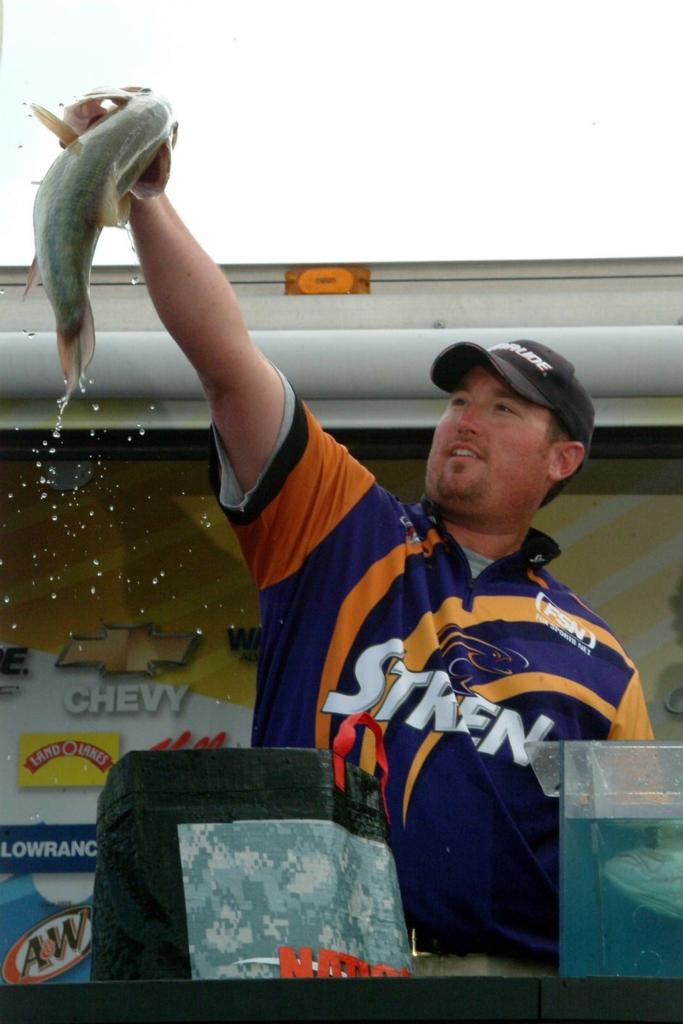 BENTON, Ky. – Andy Hodges of Cadiz performed the rare feat of leading a bass tournament wire to wire, winning the Stren Series Central Division event on Kentucky Lake with a whopping 79 pounds, 6 ounces of bass over four days. His name never left the top spot on the leaderboard despite the fact that he was fishing against some serious heavy hitters in his first-ever Stren Series event.

“This is the best fishing I’ve ever done in my whole life,” said an exuberant Hodges prior to weighing in his winning bass. “I fished my heart out this week. I’m exhausted.”

Hodges overcame a surge from runner-up Curt McGuire, who fished his best day of the week today, bringing in 21-5 to end the week with 75-11. Hodges had 20 pounds of his own, though, to ultimately top McGuire by 3 pounds, 11 ounces.

En route to the $25,000 victory, Hodges had to think outside of his box – he’s a Kentucky/Barkley native – to topple such elite pros as Koby Kreiger and Craig Powers as well as known Kentucky/Barkley stalwarts like McGuire and No. 3 Sam Lashlee. 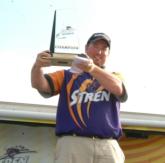 “I struggled on day two for a little while, and I’m really, really proud of myself for adjusting,” he said. “I don’t like to change, and I caught 22 pounds (on day two). It was just my week.”

While early talk indicated a hot shallow-water bite this week, the top three pros all fished relatively deep. Hodges fished a little of both, with his best fishing coming out of the deeper water.

The key was a 1/2-ounce green-pumpkin football-head jig, and he broke so many of them off that he headed out this morning with only two of them left. After he caught a limit, he was courteous enough to hand one of them to his day-four co-angler, Chuck Loerzel.

“I was fishing deep, dragging that jig along the bottom,” he said. “Most of them are postspawn fish, so you had to put it right in their face.”

Hodges also fished a Sweet Beaver around shallow wood to land his bass. And while a shallow pattern did help him on his way to victory, it was a change to deeper water that ultimately allowed him to win.

“During practice I caught a lot of fish shallow, but they weren’t quality fish,” he said. “Plus, in every bay I’d see a boat fishing bushes, so I started fishing deeper structure, and I kept moving farther out – and I kept catching them.”

The first day, Hodges said his boat sat in deep water but the fish he caught were shallower. Then came day two, when they just would not bite. He ultimately turned things around and had his best day on his toughest day, when he brought in 22-1 on Thursday.

“The past two days, I caught them all deep,” he said. “Today, I fished 4 feet down to 9 feet. I’m very much relieved. The caliber of guys here was top-notch. These are the guys I see on TV and in the magazines and on the Internet. To compete against them and win is something else.”

Two years ago, Curt McGuire of Lawrenceburg, Tenn., finished second at this very tournament on Kentucky Lake, and he’s in second again despite catching the heaviest limit of day four. His 21-pound, 5-ounce stringer brought his four-day total to 75 pounds, 11 ounces, good for $10,000.

McGuire is a seasoned Kentucky Lake pro, and he fished what he knew best – ledges – to land his bass this week.

“I always fish ledges, and I always fish deep,” he said of his Kentucky Lake strategy. “I fished anywhere from 8 to 15 feet, mostly on hard bottom and gravel patches. I live or die out there. I haven’t made a cast at the bank here in three years.”

It was an observation McGuire made several weeks ago that ultimately determined how he was going to fish the tournament this week.

“I knew at home a big wave (of spawning fish) had come up three weeks ago, and I knew they were done,” he said. “They had to go somewhere. I knew some of them had to be postspawn.”

The fish that comprised his hefty day-four sack were actually located Tuesday in practice but wouldn’t bite for him until today.

Indeed, McGuire’s co-angler partner, Stephen Smith, took home the co-angler trophy, making him the third co-angler that McGuire has guided to a win in three years.

“He netted my 4-pounder with his 4-pounder still in the net,” McGuire said of Smith, who caught 18 pounds today.

This event’s defending champion, Sam Lashlee of Camden, Tenn., ultimately took third place and $9,000 (plus a $5,000 Ranger bonus) with a four-day catch of 65 pounds, 3 ounces. His limit today weighed in at 15 pounds, 4 ounces.

“The fish were in the bushes,” he said. “I ran to New Johnsonville the first day, and every day I made a shorter trip.”

Lashlee estimates his day-one run totaled 75 miles, and he ran about 60 miles on the second day. On the third and fourth day, his trip totaled around 50 miles, and today he ran close to the White Oak Creek area.

“The second day is when I started fishing ledges harder,” he said. “That’s when I knew that I’d better get on the ledges to have a chance to win.”

That day, Lashlee visited the river islands and culled every fish out thanks to a very productive drop.

“The third day, I made a mistake and went flipping,” he said. “Today, I fished too much of the stuff that I’ve been fishing, and I struggled. I should have looked for new stuff.”

Lashlee mostly relied on a 1/2-ounce and a 3/4-ounce Strike King football-head jig in green pumpkin with a big Denny Brauer chunk. He also reported catching lots of bass on a Strike King Series 5 crankbait.

“It was a slow bite,” he said. “I was having to move my bait really slow.”

Koby Kreiger and Craig Powers are well-known among the tournament trails for sharing everything from rooms to fishing info to tournament winnings, and they took fourth and fifth place, respectively, at this week’s event.

Kreiger brought in 63 pounds, 3 ounces of bass over four days to earn $8,000 and his second Stren Series top-10 finish of the season. “It was pretty much the Andy Hodges show all week,” Kreiger said. “I caught a lot of fish but came up a little short.”

“I had such a good time,” he said. “My wife’s probably going to leave me, but I’m staying here tonight and fishing tomorrow. I’ve been getting 40 to 50 bites a day. My left hand is so sore I can’t stand it.”

Rounding out the top 10 pros on Kentucky/Barkley:

The next Stren Series event is a Western Division contest at the California Delta near Oakley, Calif., May 16-19.

The next Central Division tournament is the third event of the season. It will be held at the Columbus Pool near Columbus, Miss., June 6-9.