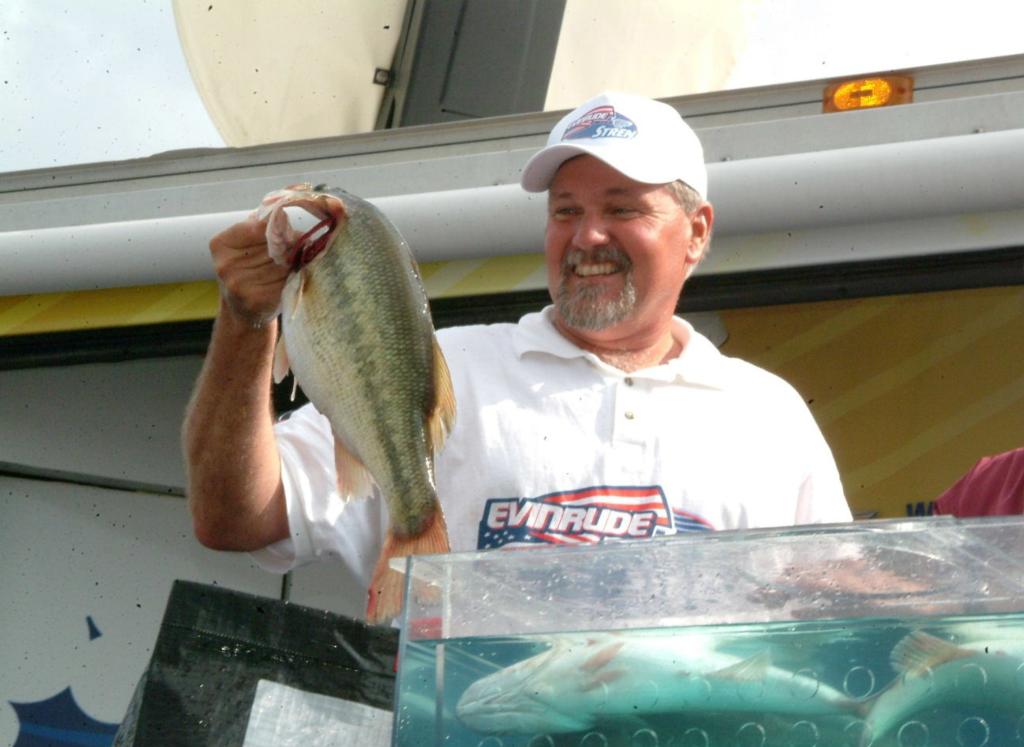 BENTON, Ky. – Stephen Smith led the Co-angler Division of the Stren Series Central Division event on Kentucky Lake the first two days of competition before stumbling a bit on day three and dropping to second. He picked the ball back up in a big way today, hauling in 18 pounds to win the tournament with a four-day total of 56 pounds, 2 ounces.

Smith’s 18-pound limit was by far the heaviest co-angler stringer of the day and was the third-heaviest weight overall on day four, bested only by a couple of pros who topped 20 pounds, including his day-four partner, Curt McGuire, who ended up second on the pro side. For the win, Smith earned $5,000 cash plus a brand-new Ranger boat.

Indeed it is. Smith said he didn’t have a bass at 10:30 this morning, but then McGuire pulled up onto a spot and voila, both of them had a limit within minutes.

“That guy’s done his homework,” he said of McGuire. Interestingly, this is McGuire’s third co-angler partner in three years on Kentucky Lake who has gone on to win the event. Clearly, he brings good luck to the back of the boat.

“Until today, every fish I weighed I caught on a green-pumpkin Brush Hog, Texas-rigged,” Smith said. “I caught them off beds and points, and yesterday we fished in the marina, and that was my tough day.”

Smith caught 10 pounds, 2 ounces on day three, a day that proved to be tough for most. He briefly relinquished the lead to Chuck Loerzel, who ultimately finished second.

“Today I caught every one of them on a Fat Free Shad, in a citrus color,” Smith said. “We had a blast. Curt is one of the finest guys out there. He busted them big. It was awesome.”

Smith is an angler who fishes every level of FLW Outdoors competition, from the Wal-Mart Bass Fishing League to the Wal-Mart FLW Tour. He has certainly had success along the way, but this is his first major victory.

No. 2 co-angler Chuck Loerzel was in the enviable position of fishing out of the back of pro winner Andy Hodges’ boat today in addition to being the day-three leader. However, a sack one bass shy of the limit ultimately kept him from victory, as he took second place and $4,000 with a four-day catch of 55 pounds, 9 ounces.

His four bass today were good ones – they clocked in at 12 pounds, 13 ounces. But Hodges and Loerzel were forced to head in early when Hodges needed to ensure the bass in his livewell would make it.

That could be true, but Loerzel certainly fished a tournament worth bragging about this week. He was never lower than 13th and busted a massive 18-pound, 9-ounce sack yesterday from the back of No. 3 pro Sam Lashlee’s boat.

Sure enough, Hodges related on stage the story of how he only had two of his fish-catching jigs left after breaking off several all week. When he had a solid limit in the boat, he handed one of them over to Loerzel, and the rest is history.

“The pros I had were fantastic all week,” Loerzel said.

Taking third place and $3,250 is co-angler Barry Baldwin of Dayton, Ohio, with a four-day catch of 50 pounds, 5 ounces. He had a solid day four, bringing in a limit worth 14 pounds, 12 ounces to move one spot up the leaderboard.

“I fished a little of everything, shallow and deep,” Baldwin said. “I came down Saturday and practiced – I figured things out and slowed down.”

Baldwin’s primary bait this week was a shaky head, though when fishing closer to the bank he used a wacky worm.

“I caught them the same way all week, though I caught my biggest bag on a wacky worm,” he said.

Baldwin fished with Lashlee today and caught the fire out of them, as one might expect when fishing with a Kentucky/Barkley expert like Lashlee.

“We fished south,” Baldwin said. “The fish were there. I fished a little slower than he did and culled out five or six times. I was just a little too far behind to win. I’m pleased.”

Pempek, Hunter round out top five

“I probably caught a hundred bass this week,” he said. “I didn’t have any practice; I just came down wanting to fish.”

Behind him in fifth is Brandon Hunter of Benton with 37 pounds, 5 ounces over four days.

Rounding out the top 10 co-anglers on Kentucky/Barkley:

The next Stren Series event is a Western Division contest at the California Delta near Oakley, Calif., May 16-19.

The next Central Division tournament is the third event of the season. It will be held at the Columbus Pool near Columbus, Miss., June 6-9.