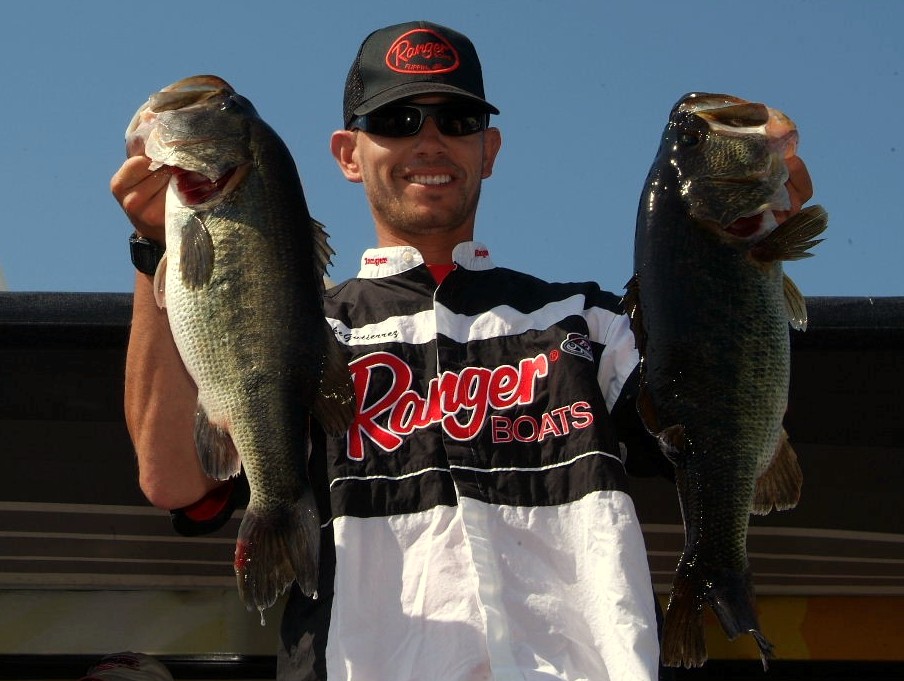 BETHEL ISLAND, Calif. – It was a good day for “Mikes” at the California Delta. The top five pros after Wednesday’s opening round of Stren Series Western Division competition – all of whom caught 27 pounds or more – were all named Mike.

Coincidence? Maybe, but the results speak for themselves.

The top Mike of a big-fish day was Mike Gutierrez of Salinas, Calif., who came in with a five-bass limit weighing 29 pounds, 7 ounces to lead the Pro Division. While he didn’t catch any of the double-digit kickers weighed in by a smattering of his fellow pros – he estimated his biggest fish at around 8 pounds – Gutierrez just filled out his limit with solid California Delta largemouths.

That is, each of his fish weighed more than 5 pounds.

“All I fished for were big bites,” Gutierrez said. “If I don’t think I’m going to catch a 5-pounder, I’m not going for it.”

There are very few places where a tournament angler says something like that and gets away with it, and the California Delta – which, along with its cousin to the north, Clear Lake, pretty much represent the apex of big-bass tournament fishing – is certainly one of them. There are so many quality fish prowling around the lowlands of the San Joaquin and Sacramento rivers that catching a limit here isn’t even a question; it’s all a matter of size.

Despite catching nearly 30 pounds of those sizable bass, Gutierrez, a rookie pro, didn’t quite know what he’d accomplished Wednesday.

Gutierrez said he fished the “central” area of the Delta on day one, focusing on shallow weed flats. With three days to go, that was about the extent of the fishing details that could be pried out of him this early in the week. He did say, however, that he was throwing two key baits and that a weather warm-up Wednesday helped him enormously.

“My prefishing wasn’t what I expected it to be,” he said. “It was cool and a little windy. I’m kind of fishing summertime stuff, and I had a bait that was working really well here a couple of weeks ago, but it cooled off in practice. I just hope it gets warm and stays warm. It was definitely a lot calmer today, whereas the last few days it was really windy. If it gets hotter, it’s just going to make my pattern stronger.”

Gutierrez has fished only one prior FLW Outdoors tournament in his career, the FLW Series Western event at the Cal Delta earlier this season. While he doubted that he could pull in another 30 pounds Thursday, he relished the idea of sharing a leaderboard for a day with Delta heavyweights like Robert Lee, Bobby Barack and Mike Folkestad.

“I’ve been in awe of Robert Lee, Bobby Barack and those guys, and I’m just trying to get something going close to what they usually bring in,” Gutierrez said. “I’ve looked up to (Lee) for so long, it’s just an honor to be (on the leaderboard) with him.” 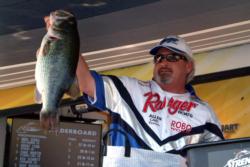 “I’m just fishing outside grass lines where the fish are moving in and out with the tide,” he said. “I’m sticking it out all day on one spot.”

That spot is no secret, either. O’Shea admittedly caught his fish in Franks Tract “right out in front of the marina (Russo’s, the takeoff and weigh-in site).”

“There are huge clumps of peat moss there, which kills the grass in certain areas,” he said. “But there’s grass growing right around it, with little alleys and trenches that the fish move in and out of. I’m just throwing Yamamoto Senkos.”

Wherever he fishes, O’Shea is somewhat of a big-bass specialist. Just this year, he has caught at least three double-digit fish in competition, and his 11-pound, 4-ouncer today wasn’t even his biggest. Last month he caught a 10-2 at Clear Lake, and he landed a 12-3 in FLW Series action here at the Delta in March. 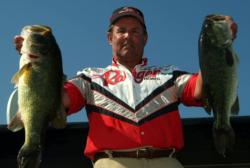 The aforementioned Folkestad, who hails from Yorba Linda, Calif., and top-10ed at the Delta earlier this season in FLW Series competition, took third for the pros with a limit weighing 27 pounds, 13 ounces.

“I’m happy with today. Anytime you catch 20 pounds, it’s a good day,” he said. “These fish are mostly postspawn. A few stragglers are spawners, but I’m just fishing areas adjacent to spawning grounds.”

Folkestad said he caught his fish on Roboworms, Senkos and Pepper jigs in Franks Tract and Little Franks Tract, but didn’t plan on returning to the same areas Thursday.

“I’ll fish the same pattern, but tomorrow I’ll probably go someplace different due to the pressure they’re getting,” he said. 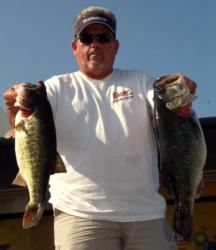 Mike Goodwin of Lake Havasu City, Ariz., took advantage of the remaining spawners and claimed fourth for the pros with a limit weighing 27 pounds, 3 ounces.

He said: “It seems like every time I’ve been here I’ve had trouble getting a big bite, but I got them today. I’m bed-fishing, and I caught a ton of them. I’m just fishing plastics, a drop-shot and a Texas rig.” 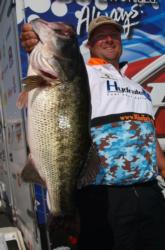 Buoyed by a 10-pound, 2-ounce kicker largemouth, pro Michael Tuck of Antelope, Calif., rounded out the top five Mikes on Wednesday with a limit weighing 27 pounds even. Leading the Western Division in points coming into the event, Tuck’s opening-day effort took him one step closer to locking down the standings title.

“I’ll admit that it’s weighing heavily on my mind, but I’m trying not to think about it,” he said about the standings race. “So I’m thinking about it, but it’s on the back burner.”

Tuck, a renowned sight-fisherman, didn’t abandon the horse that brought him this week. He fished beds most of the day, throwing brush hogs and Senkos.

“The fishing’s been good for me; it’s a good tide. I’ve got a bunch of fish left,” he said. “With the fishing as tough as it was – which showed in the overall weights – that kind of played in my favor. I can fish for 3-pounders all day and be happy.”

Tuck hasn’t clinched the points race yet, though. While second-place pro Gene Gray posted a disappointing 91st place Wednesday, third-place Jimmy Reese, the reigning California Delta and Western Division points champion, was hot on Tuck’s heels Wednesday with an eighth-place catch. Reese, however, needs to make up 31 points on Tuck to overtake him and repeat as standings champion, and he saw his chances dwindle even further with Wednesday’s outcome.

“My hat’s off to Mike,” Reese said. “He’s leading the points, and he needed to keep the pressure on. That’s just what he did.” 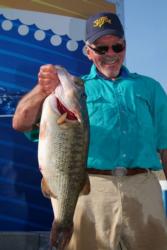 Rounding out the top 11 pros after day one at the California Delta:

Each of the top 10 pros caught limits Wednesday. The 174-man pro field brought in 161 limits.

Archer also earned the Snickers Big Bass award in the Pro Division thanks to a nasty-big 12-pound, 3-ounce largemouth. The fish officially ranks 11th on the list of FLW Outdoors heaviest bass ever caught. 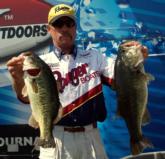 “Today was great. This is one of the largest bags I have ever caught,” Brown said. “I’ve been here prefishing with Bobby Barrack and Michael Tuck, and they have really taught me how to catch these fish behind these pros. They have shown me what to throw in so many different scenarios. I think I’m prepared for just about anything. Today, I just followed their direction and everything worked.” 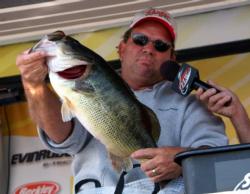 Curt Dowhower of Ripon, Calif., caught the co-angler Snickers Big Bass – an 8-pound, 13-ounce largemouth – and placed second with a total of 24-9.

Billy Dehart of Pleasanton, Calif., placed third for the co-anglers with a limit weighing 19 pounds, 9 ounces.

Rounding out the top six co-anglers were James Cadell of Escalon, Calif., and Steve Marino of Salida, Calif., each with a limit weighing 17 pounds, 15 ounces.

The co-anglers caught a total of 120 limits.

Day two of Western Division competition at the California Delta begins as the field of 174 boats takes off from Russo’s Marina at 6:30 a.m. Pacific time Thursday.