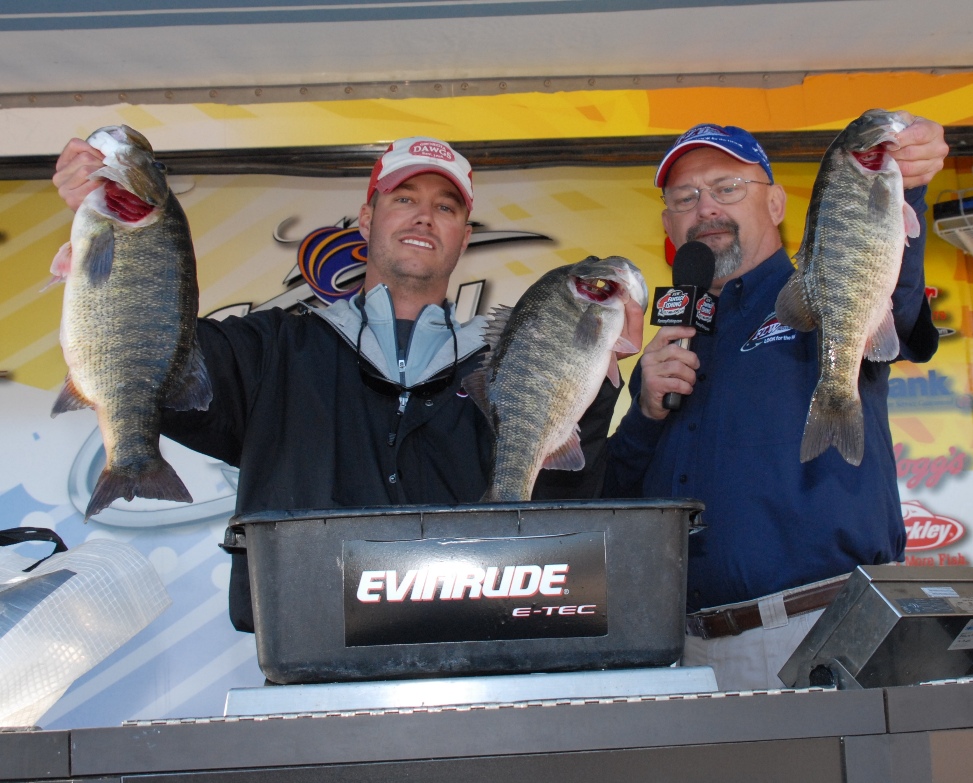 No matter what you call them, they are a beautiful bronze bass that are as wild as the swift, rocky whitewater of the upper Flint River, one of the few places in the world where this rare species of bass regularly grows to weights of 5 pounds plus.

They are also currently the centerpiece of the Stren Series Southeastern event on Lake Seminole. That’s because Clint Brownlee of Tifton, Ga., now leads the Stren event with a three-day total of 40 pounds, 5 ounces of pure shoal bass.

For the last three days Brownlee has traveled some 30 miles up the Flint River over waterfalls and numerous shallow shoals in an aluminum tunnel-hull boat to target the unique species.

After catching a 19-pound limit of shoalies yesterday, Brownlee caught three shoal sows today, including a 6-pound, 8-ounce monster, for 13 pounds, 6 ounces to move into the lead.

What makes Brownlee’s story even more remarkable to this point is that Lake Seminole’s main lake largemouths have been unable to match Brownlee’s shoalie pace; he now leads the event by 11 pounds, 6 ounces.

“The quality is still there, but I’m afraid I’m running out of numbers of fish,” Brownlee said. “That rain last night is not helping either. I can see the mud line coming down the river.”

Brownlee is using a combination of jigs, crankbaits and spinnerbaits in off-colored water for his catch.

“I plan to go back up there again tomorrow,” he said. “I’m a river fisherman and I have to go with what I know. I might not run up there as far as I have been going, though. I’ve beat the same stretches to death the last three days and I got a lot fewer bites today. So I’m going to fish some new water tomorrow a little closer to avoid that fresh muddy water coming down the river.”

Local Frank Jordan of Bainbridge, Ga., is proving what consistency can

do on Lake Seminole.

Although he has not caught a five-bass limit any of the three days, he has posted solid weights each day to amass a three-day total of 28 pounds, 15 ounces, good enough for second place.

Jordan said he is throwing a 1/2-ounce Strike King lipless crankbait on grass flats in the Chattahoochee River.

“They’ve been biting early,” Jordan said. “Like this morning, I caught two of my three keepers within minutes of getting to my first spot. I was almost the last boat out this morning and that may have cost me a few minutes of prime fishing time. With only 10 boats tomorrow, I’ll get down there earlier and hopefully be able to take advantage of that prime early morning window.”

After sacking up four bass for 21 pounds, 7 ounces on day two, Mike Jackson of San Mateo, Fla., zeroed today, demonstrating just how fickle and cruel Seminole bass can be.

“I never got a bite,” Jackson said. “I stayed with the flipping most of the day and they just weren’t there. At the end of the day, I finally moved out and threw a rattle trap for a while and my co-angler got a good one – about 3-1/2 pounds – on a trap. Tomorrow I’m going to fish the rattle trap a lot more. I think this sun will get those trap fish going.”

Curt Fannin of Prestonburg, Ky., moved up to his best position of the week, fourth, with a three-day total of 27 pounds 11 ounces.

Much of Fannin’s weight came from his day-two catch of 20 pounds, 13 ounces – one of the very rare 20-pound plus limits weighed in this week.

Unlike other leaders who have been rattle trapping and flipping, Fannin has been Carolina rigging all week.

“The key component is rock,” Fannin revealed. “If you find the rock, you find the fish. I think the reason they bit so good yesterday was because of the clouds. The other two days have been sunny and they have not bit as good on those spots when the sun is out.”

Rounding out the top five pros is local stick Troy Arthur of Bainbridge, Ga., who

Rounding out the top-10 pros in the Stren Series Southeastern on Lake Seminole who will be fishing the final day:

For the second day in a row, Gerrit Goins of Cleveland, Tenn., caught just one bass to narrowly hang onto his co-angler lead of 17 pounds, 13 ounces.

The good news for Goins now is that he will be paired with tournament leader Clint Brownlee for a trip up the Flint River into shoal bass country on the final day.

Ralph Moseley of Panama City, Fla., has been slinging a red rattle trap behind his pros all week to amass a three-day total of 17 pounds, 3 ounces for second.

Matthew Roesch of Toccoa, Ga., boated three nice bass on a Berkley Chigger craw today for 11 pounds, 10 ounces, which pushed him into third place with a three-day total of 16 pounds, 8 ounces.

Tom Ridley of Valdosta, Ga., is in fourth place with a three-day total of 15 pounds, 9 ounces.

Joseph Jenkins of Harrogate, Tenn., rounds out the top 5 with a three-day total of 14 pounds, 2 ounces.

Rounding out the top-10 co-anglers in the Stren Series Southeastern on Lake Seminole who will be fishing the final day:

9th: Delane Harrison of Cottondale, Ala., three-day total of 13-6

Day four of the Stren Series Southeastern event on Lake Seminole will begin on Saturday at 7:15 a.m. at the Earle May Boat Basin in Bainbridge.