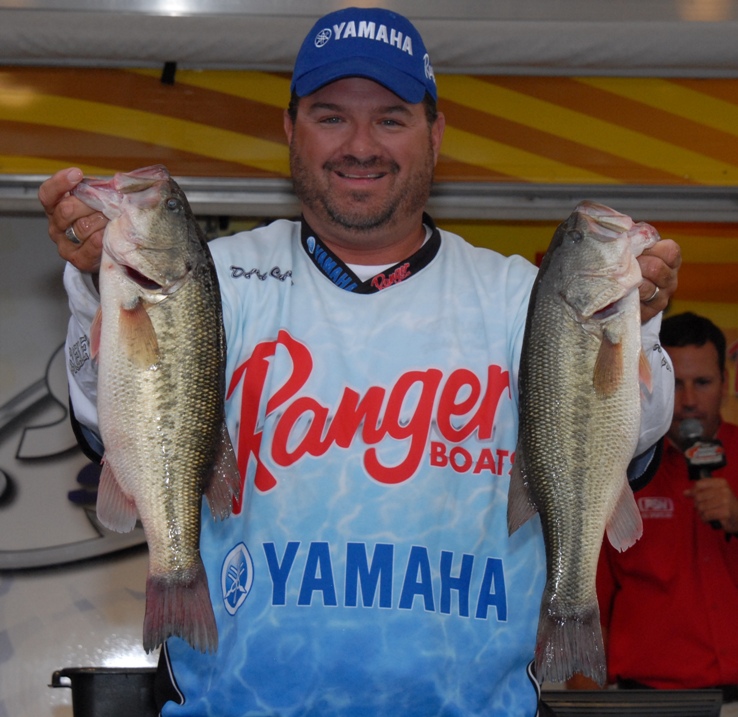 BRANSON, Mo. – Professional angler David Curtis of Trinity, Texas, loves fall – the time of year that repetitive fronts roll across the United States, changing the color of trees, dropping water temperatures in lakes and triggering largemouth bass to feed up before winter sets in.

So when Curtis awoke on day one of the Stren Series Championship to a balmy, pre-frontal morning at Table Rock Lake, he knew exactly what he was going to do: target largemouths.

“The first place I stopped I caught my two biggest fish, and that got the day started right,” Curtis said. “After that I decided to fill out my limit with a few spotted bass from a schooling spot. By 10 o’clock I had my limit and decided to go practicing for largemouths again. This warm, windy weather made conditions conducive for largemouth fishing, so that’s what I did the rest of the day, and I ended up culling out all my spotted bass.

“I really took advantage of the conditions,” Curtis added. “In post-frontal conditions, I don’t think I could have caught any fish the way I was fishing today.”

five green fish for 16 pounds, 11 ounces to take second place after day one.

Davis’ iniital intent, however, was not to catch largemouths. In fact, he had a great practice catching smallmouths, but when he returned to his primary smallmouth water today, all the fish were largemouths.

“I’ve been catching some quality smallmouths cranking and really thought that’s what I was going to catch today,” Davis said. “But it was like the smallmouths moved out and the largemouths moved in.

“I’m keying in on something real specific, and I don’t know why smallmouths were even in these places in the first place. It took me a while to figure out how the fish repositioned on this stuff, and when I did, it turned into much more of a largemouth bite.”

Davis added that he has about 15 key places, and he only fished three of them today.

Goines revealed that he is fishing standing timber in creeks.

“The weather really helped today,” Goines said. “I started out fishing for largemouths and then later in the day moved down the lake to a place that had wind blowing into it. I pulled out a little jig with a Berkley Chigger Craw on it and caught a really nice smallmouth. Everything I’m fishing is very creek related, especially the standing timber.”

Local pro Stacey King of Reeds Springs, Mo., could be the one to watch for in victory

lane this week simply because he has his bases covered, no matter what the weather does.

He weighed in three smallmouths, a spotted bass and a largemouth for 14 pounds, 9 ounces today, but says he should have had more.

“I don’t know if I got a little too anxious or just had some bad luck today, but I lost several key fish including one about 5 pounds,” King said. “I know so many places on this lake, I could not possibly fish them all in four days. Right now I’m just trying to catch a decent limit each day while saving some of my best places for the finals, particularly if this front goes through and it gets tough on the backside of it, I’ve got plenty of stuff to go to.”

Martin, too, cashed in on the largemouth bite today.

“The conditions were right for largemouths today,” Martin said. “I think the good largemouth bite could last another day, but after that it could get a lot tougher, and some of the other species might be a safer bet.”

Rounding out the top 10 pros in the Stren Series Championship on Table Rock after day one:

Stephen Smith of Glenwood, Ark., leads the Co-angler Division of the Stren Series 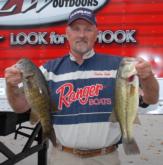 Smith fished jigs and crankbaits behind pro Rick Barham for his leading catch.

James Watson of Waynesville, Mo., is in second place in the Stren Series Championship after day one with four bass weighing 12 pounds, 6 ounces.

James Richardson of Harrison, Ohio, rounds out the top five in the Co-angler Division with four bass weighing 10 pounds, 8 ounces.

Terry Rose of Eastland, Texas, caught the big bass in the Co-angler Division on day one weighing 5 pounds, 10 ounces.

Rounding out the top 10 co-anglers in the Stren Series Championship after day one:

Day two of the Stren Series Championship on Table Rock Lake will begin at 7 a.m. Thursday at State Park Marina, located at Highway 165 S. in Branson.