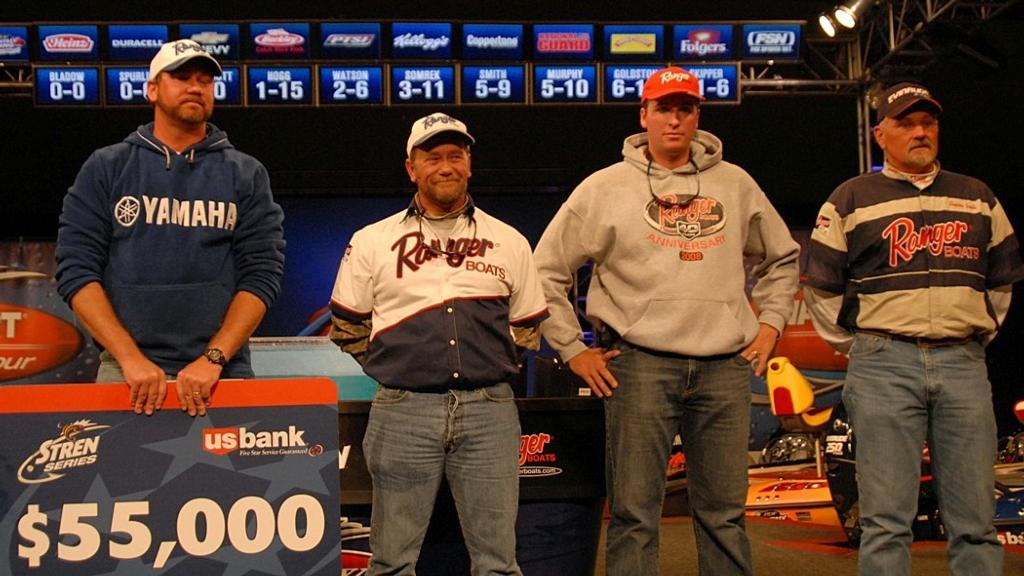 Co-anglers set for Pittsburgh … Now that the co-angler competition has concluded, we know who the five 2009 Forrest Wood Cup qualifiers are from the Stren Series. Tommie Goldston of Gardnerville, Nev., secured a spot in the Forrest Wood Cup Thursday as the only Western Division qualifier to make the top-10 cut. Scot Keefe of Hinesburg, Vt., finished 24th overall, but still advanced to the Cup as the highest finisher from the Northern Division. As the Co-angler champion, John Skipper, will represent the Southeast Division at the FWC. With three bass weighing 5-10, Shawn Murphy out-fished three other finalists for the Central Division berth and the Texas Division slot went to Stephen Smith. “My head is kind of spinning right now but I think I get to go to Pittsburgh and fish the Forrest wood Cup,” said Goldston, the second-place co-angler. 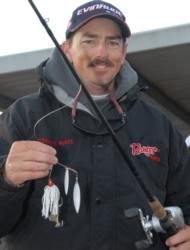 hampionship on Wheeler Lake by throwing his homemade signature spinnerbait. Although the venue has changed, Scott is back in contention using the very same bait, which features two all-white willow blades, a white skirt and a red head. Trailing the leader by just over 2 pounds, Scott could become the first two-time Stren Series Championship winner tomorrow with a solid sack. “I was really hoping to do better than I did today,” he said. “I had a limit this morning by 9 a.m. I just kept culling by ounces instead of pounds. Looking back, that first title meant everything to me. Winning another one would be even better and the money doesn’t hurt either.”

Curtis, Bohannan, McMullin love Stren Championship … If at first glance the top 10 in this year’s Stren Series Championship looks eerily similar to last year’s – you’re on to something. Pros David McMullin, David Curtis, and Greg Bohannan all advanced to the final round of 10 boats two consecutive years. Last season, Bohannan took second, Curtis took third and McMullin finished ninth. Bohannan and Curtis each earned a berth to the Forrest Wood Cup through the Stren Series and are in a rare position to do it again. “Before yesterday, I didn’t give the Cup any consideration,” said Curtis. “But that’s the way it should be because the tournament and the Cup go hand in hand. I will admit that yesterday I started thinking who from the Texas Division did well and could beat me. Then I remembered, Lendell (Martin) caught them good.” Lucky for Curtis, the Nacogdoches, Texas, pro did not catch them good on day three. Barring a bizarre turn of events, Curtis will have used the Stren Series two consecutive years to qualify for the richest bass tournament the sport has to offer.

Best Stren season ever … With 785 points out of a possible 800, Michael Iaconelli had the second best regular season in Stren Series history. In 2006, Coppertone pro Chris McCall tallied 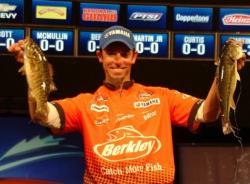 788 points over four events. McCall’s worst tournament was an 11th-place finish at the season opener on Lake Amistad. From there, the Jasper, Texas, native won the Sam Rayburn qualifier and took second at the final two stops. At the championship, McCall stumbled, finishing 145th largely due to a fuel mishap. Iaconelli top-10d at every qualifier this year, including his victory on Kerr Lake. But unlike McCall, Iaconelli is also thriving at the year-end championship – currently sitting in eighth place. That means we are likely witnessing the greatest Stren Series season in the circuit’s history.

New net was worth it … On Wednesday, Florida pro Matt Greenblatt caught a 7-pound, 1-ounce Table Rock Lake hog that earned him $750 as the Snickers Big Bass of the day. But Greenblatt wasn’t done earning money for that single largemouth bass. Because he boated the fish with a Frabill net, he will take home an additional $2,000. “Ron’s (Tournament Director Ron Lappin) always saying that every angler needs a net, so why not get a Frabill? I finally took his advice and about a week ago I went to Walmart and got a Frabill Competition Series net.”

11-6: Winning weight, in pounds and ounces, in the Co-angler Division.

11-3: Lead, in pounds and ounces, Curtis has over Martin for the Texas Division berth in the 2009 Forrest Wood Cup.

5: Number of top-10 cutoffs made by Iaconelli in five Stren Series tournaments this year.

2: Number of times Ott Defoe has qualified for the Forrest Wood Cup through the Stren Series. 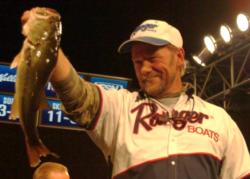 “I’ve never been any further east than Elko and that’s about 300 miles from the house,” – Goldston, who was clearly excited about the prospect of visiting Pittsburgh.

“I had an amazing partner today. Robbie Dodson is just a wonderful fisherman and a great guy,” – Co-angler champion John Skipper.

“I just had a nice trip in Branson,” – FLW Outdoors TV host Jason Harper, who took a serious spill on the stairs leading up to the stage.

“You’ve got to fish to win. If you change your mindset and try to fish conservatively you’ll never succeed,” – Iaconelli, on his strategy for qualifying for the Forrest Wood Cup.

“I lost the winning fish several times so I’ve got a bone to pick with Pittsburgh,” – Iaconelli, on his 2005 Bassmaster Classic experience.

The final takeoff is scheduled to take place at 7 a.m. Central time from State Park Marina, located just south of Branson on Highway 165.