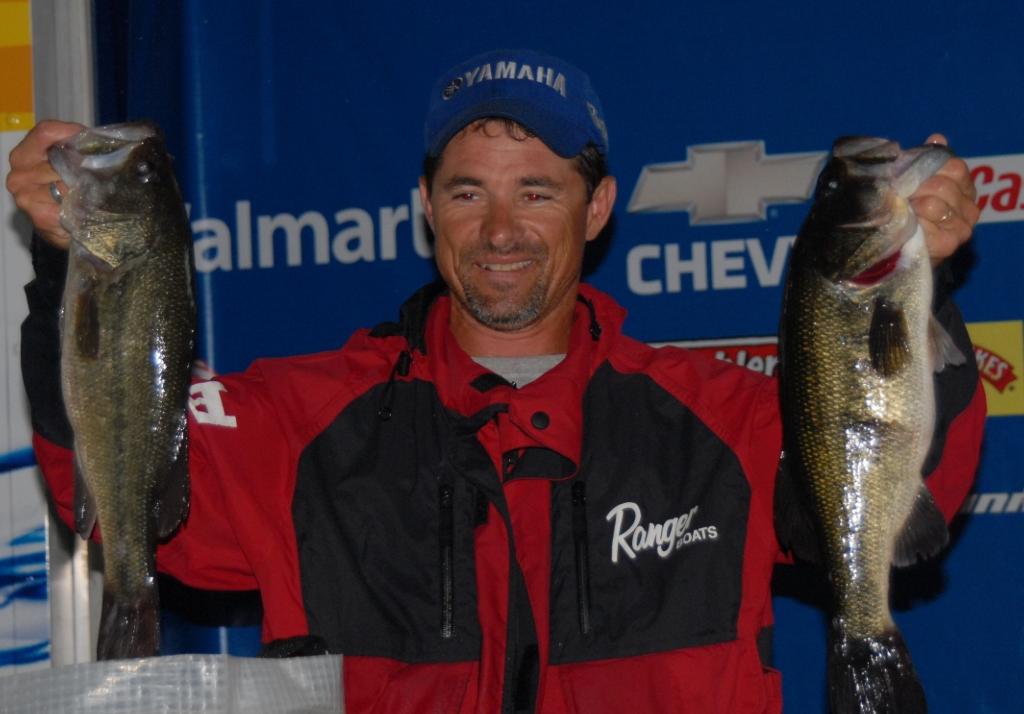 SOUTH HILL, Va. – The day-two weather conditions at the Lake Gaston Stren Series event were 180-degrees opposite of day one. Yesterday’s summer-like heat and humidity sent temperatures to the 90-degree mark. But with today’s wind and drizzle, the day-time high barely reached 70. Welcome fall!

Such rainy, drizzly conditions seemed to the make largemouth bass bite better as the catch rates went up considerably on both the pro and co-angler side.

The bite certainly improved for Joel Richardson of Kernersville, N.C., who followed his 12-pound, 1-ounce effort yesterday with 13 pounds, 9 ounces today to take the tournament lead with a two-day total of 25 pounds, 10 ounces.

But for Richardson, the better bite had a lot more to do with moving water than rainy conditions.

“At noon I did not have a fish,” Richardson said. “And I made a move to a current-oriented spot just about the time the current kicked on. Normally it takes about 2 hours for the water to really start moving after they turn the water on. Well, they must have turned on all the gates at once today because in about 15 minutes the water went from sitting still to absolutely ripping and the bite came alive.”

“In a matter of minutes – between my partner and me – we caught 9 keepers,” he continued. “The fish are everywhere in this place, but they’re scattered out. And when they kicked that current on, they all come to this one place so I’m hoping for some current tomorrow.” 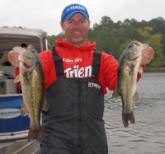 Kellogg’s pro Dave Lefebre of Union City, Pa., moved up to second place after day two with a two-day total of 24 pounds, 10 ounces.

Lefebre is covering water with just two lures. Yesterday he used a Tabu jig, swimming it through the grass and today, with the rain, he put a buzzbait in the mix.

“I’m covering a ton of water but I am keying on a certain kind of bank – and it all has to do with how the bank falls off into deep water – but I can’t really tell if it’s right until I get right up and look at it,” he added. “I have yet to repeat any water in two days, but tomorrow I’m going return to some of my good water from day one that I fished over pretty fast.”

As for possibly winning this Stren event, Lefebre said: “It would certainly help take away some of the sting from last week.”

Chris Baumgardner of Gastonia, N.C., moved into third place with a two-day total of 22 pounds, 8 ounces.

Baumgardner has got quality fish going, but has yet to cap a limit either day. Each day he has weighed in four bass for just over 11 pounds.

Andy Francis of South Boston, Va., moved into the fourth place position today thanks to a 13-pound, 1-ounce limit which pushed him to a two-day total of 22 pounds even.

Francis is catching some smaller fish from the grass, but noted that his better fish are coming by cranking out deep.

Powroznik favors the sun for his technique of sight-fishing pods of bass swimming down the bank and it was `dark-thirty’ all day due to the heavy cloud cover today.

“That sun not only helps see the bass, but more than anything I think it helps put the bait up shallow and that never happened today; there was not near as much bait shallow as yesterday.”

Rounding out the top-10 pros in the Stren Series Northern on Lake Gaston after day two: 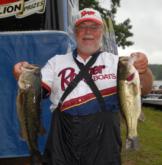 Charles Gandee of Efland, N.C., took over the lead in the Co-angler Division today with a big back-deck limit of 13 pounds, 12 ounces, which gave him a two-day total of 20 pounds, 14 ounces.

His limit was anchored by a 4-pound, 11-ounce bass that bit a Texas-rigged worm on the outside of the grass.

Moo Bae of West Friendship, Md., is in second place with a two-day total of 14 pounds, 15 ounces.

Bae caught his fish on a Senko today,

George Yund of Albany, N.Y., rounds out the top-five co-anglers with a two-day total of 10 pounds, 10 ounces.

Rounding out the top-10 co-anglers in the Stren Series event on Lake Gaston after day two: