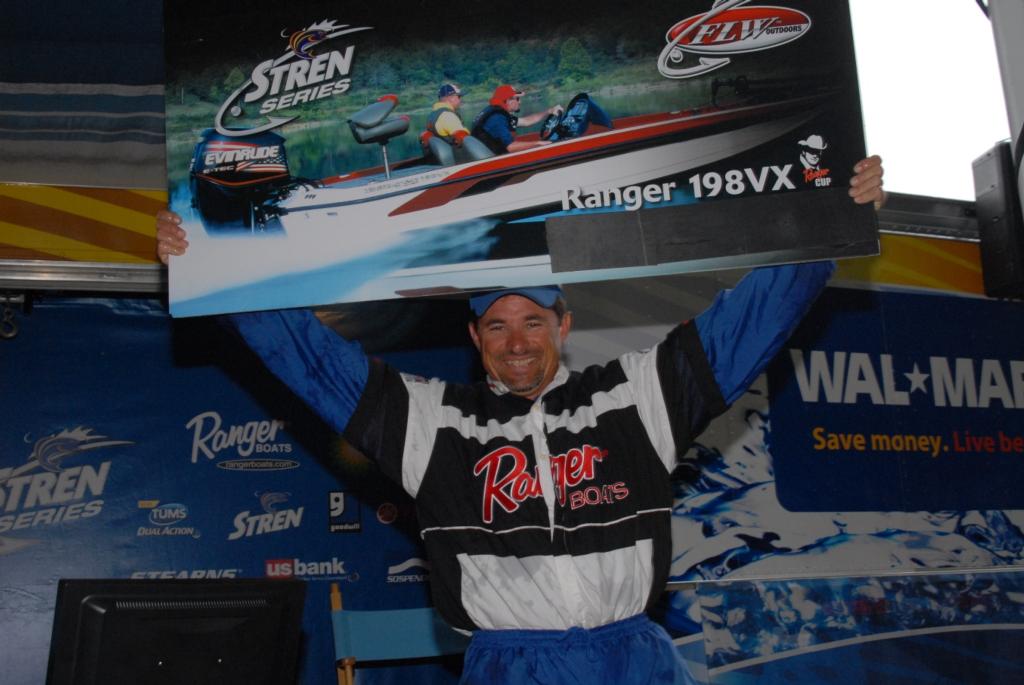 SOUTH HILL, Va. – For 11 straight seasons, professional angler Joel Richardson of Kernersville, N.C., was a permanent fixture on the Walmart FLW Tour. But at the end of the 2008 season, Richardson had to give up his professional fishing career.

A checkless FLW Tour season in 2008 combined with the loss of his primary sponsor, Fujifilm, put Richardson on the ropes financially. In addition, a decade-long career of life on the road had taken its toll.

“I think I got a little burned out,” Richardson said of his pro career. “I sort of lost my drive to do it, and my performance suffered. I just needed to take a little time off to recuperate and get that desire to compete back. Don’t get me wrong, I still love it. In fact, my wife, Jackie, and I miss our fishing friends on Tour terribly, but I just needed to take care of priorities at home.”

Today Richardson proved he still has the desire and skill to compete by winning the Stren Series Northern Division event on Lake Gaston with a three-day total of 36 pounds, 9 ounces. His winnings included $15,000 cash plus a fully rigged Ranger boat.

“This is going to help big time,” Richardson said of his win. “I’ve traveled the roads for a long time as a pro with my family, and it takes a lot out of you. It kind of took the drive out of me, and I had some financial issues too. So I’ve taken some time off the road to start a business, and this win is going to go a long way in helping things out.”

This was Richardson’s first FLW Outdoors tournament since he stopped fishing at the end of 2008. But he made it clear that this win does not mean he’ll be jumping back in the pro ranks any time soon.

“My dad and I have started a demolition-landfill-and-recycle business, and it’s doing really well,” he explained. “I’m still guiding here on Gaston and at Kerr. Also I’m making lures in my basement for a little extra money – the very lure that helped me win this event is a prototype I’m making for Jimmy Edge that’s going to be out soon. So all is going well, and I’m not going to leave from my businesses here at home for while.” 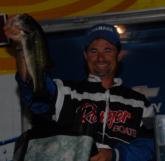 His primary pattern was to work a rare late-season mayfly hatch that started about two weeks ago.

“A couple weeks ago a friend tipped me off to these strange flies hatching out along the banks up the river,” Richardson described. “They look just like a mayfly, but they are white – almost like the color of an albino catfish. I’m really not sure if they are actually mayflies or some other kind of insect. In my years of guiding here, I have never seen them before.

In order to imitate the bream and perch, Richardson relied on the lure he’s been making in his basement for Edge Lures called a Hell Raiser, a ChatterBait-style lure in a dark color. He also used a Lucky Craft RC 1.5 crankbait in a perch pattern as well.

“We’ve made some modifications to the Hell Raiser to make it snag-proof,” Richardson said. “I can run it down a log 15 times and not get hung.”

The catalyst for Richardson’s pattern was current. As soon as the current began each day (from the Kerr Reservoir dam), the white mayflies would start collecting in eddies. Within minutes, perch and bream would start boiling on the surface, eating the flies. Pretty soon the bass would show up, wolfing down perch, and Richardson was right behind with his perch imitators.

Lefebre’s primary pattern all week was fishing seawalls and grass in major creeks with a 7/16-ounce Tabu swim jig tied to 10-pound-test Trilene 100% fluorocarbon line. He used an 1/8-ounce buzzbait around the walls as well.

“The deeper seawalls were the key,” Lefebre said. “The deeper, darker-looking walls were the best for quality fish, but there are only so many of those deeper walls on the lake.”

Lefebre got his limit started early Saturday morning by fishing a schooling hole with a Carolina-rigged Norie’s Bug.

“I caught a limit pretty quick, but then I could never upgrade on the seawalls,” he added. “I don’t think those seawalls replenish very well from day to day.” 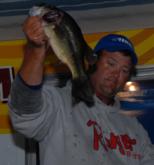 Chris Baumgardner of Gastonia, N.C., finished third with a three-day total of 33 pounds, 4 ounces worth $4,815.

“I was looking for little shallow flats that broke off into deep water,” Baumgardner said. “If the flats had shore grass on them, it seemed to help. But today the grass did not seem to matter – they were just on the flats.”

He fished “half-dead grass” in 6 to 14 feet of water in the eastern half of the lake with a Zara Spook, a crankbait, a spinnerbait and a drop-shot.

Bledsoe targeted deep fish offshore with a crankbait and a big worm.

Rounding out the top 10 pros in the Stren Series Northern event on Lake Gaston:

A big congratulations goes to rookie pro Chris Johnston of Peterborough, Ontario, who, in his first season on the Stren Series Northern Division, won the Angler of the Year title with a total of 725 points.

Johnston’s finishes for the season included 21st at the Potomac River, second at 1000 Islands, eighth at Champlain and, most recently, 48th at Gaston.