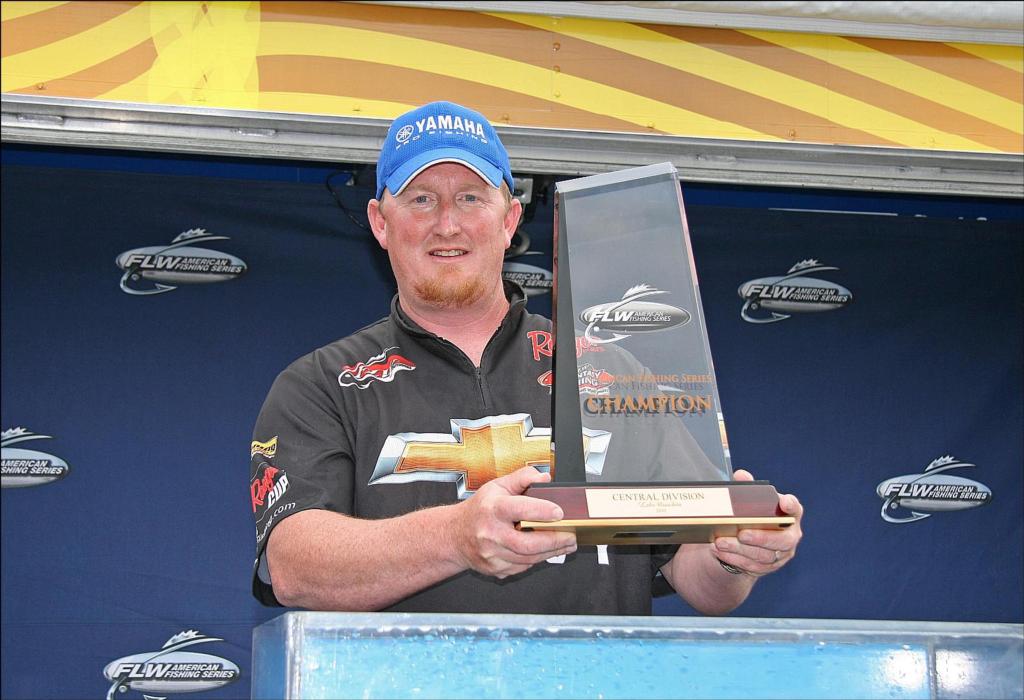 Here’s the picture: At 1 p.m. on the final day, Jones holds five fish in his livewell. He’s happy to have a limit, but he knows he needs to cull out one small bass. Time to get creative.

“The key fish that put me over the top, I had fished for it for three days,” Jones said. “I told my co-angler, `If I’m going to win this, I have to go catch that fish.’ The fish was really spooky – it wouldn’t stay 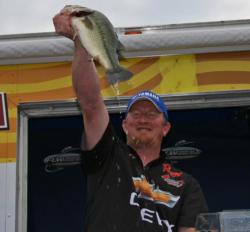 around the bed, so I rigged a drop-shot with a Roboworm on a 4/0 hook and an ounce and a half tungsten weight on 20-pound line and a 7-foot heavy-action rod. I dropped the rig right in the bed, backed my boat off 60 to 70 yards, and she bit.”

For all of his other tournament fish, the Spokane, Mo., pro used a Texas-rigged green-pumpkin Zoom Critter Craw with a 5/16-ounce tungsten weight. Jones bagged limits each day, and his day one score of 20-4 was the event’s only 20-pound bag. Adding this to his 17-14 on day two and his final-round weight of 15-3 produced a winning total of 53-5. 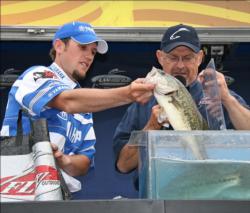 Sunny skies on the first two tournament days offered ideal sight-fishing conditions, and Jones took full advantage of the opportunities. The day-three forecast called for cloudy conditions and rain by midday, but the weatherman got that one wrong. Anglers launched into windy, slightly cooler conditions with the sunrise muted by dense cloud banks. But as the day progressed, the clouds thinned and the sun occasionally peaked through. Overall light levels remained high enough for sight-fishing throughout the day.

Jones said the unexpected visibility of day three played out well for him. He had backup tactics in mind, but he had committed much of his efforts to the bed-fish game. Getting one more good crack at the shoreline fish was just what he needed.

“I found a lot of fish (in practice), but after the first day of the tournament, other people found them and they were gone,” Jones said. “Every day I put the trolling motor on high with my Pro Guide batteries, and I just covered as much water as I could. I found a couple of good fish today that really helped me.”

Jones said his first event on Ouachita left him impressed with the fishery. “There are 1 1/2- to 3-pound fish everywhere. I really enjoyed it.”

For his victory, Jones earned $20,726 and a 198VX Ranger boat with a 200-horsepower Evinrude or Yamaha outboard motor.

After two days in third place, Stetson Blalock of Benton, Ark., gained one spot to finish second with 49- 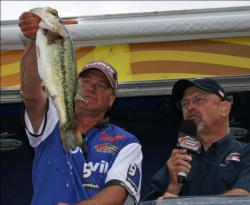 6 and a check for

$7,047. Flipping beds had produced well for him all week, and while his 14-7 was a solid effort, he reported struggling throughout the day.

“I thought I could do better today, but it just got tough on me,” he said. “I stayed in one area where I thought big fish would keep coming up, but today they just didn’t.”

Days one and two saw Blaylock enter limits weighing 19-10 and 15-5. He caught all of his bass sight-fishing with a Texas-rigged green-pumpkin Berkley Chigger Craw. “The fish don’t like anything in their beds, but when it has (Berkley) Powerbait in it, it’s pretty good.”

Bever winds his way into third 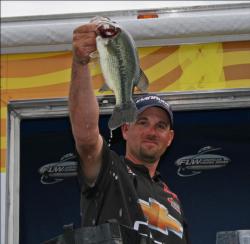 Cary Bever of Rhinelander, Wis., moved up three spots from sixth place on day two and finished third overall with 47-13 and $4,974. On the weigh-in stage, Bever was very vocal about the pain of pondering how heavy his sack could have been.

“With 15 minutes left, I lost one that was 6 pounds right at the boat, and I just ran out of time,” he said.

If fate offers any consolation, Bever’s limit included another 6-pounder-plus that did not pull the slip. This and most of his other fish fell for a Lucky Craft Pointer 100 jerkbait in the Ghost Pearl Ayu color.

In fourth place, Shane Long of Sarcoxie, Mo., had 47-11 and earned a check for $4,145. Long caught his fish by flipping beds with a Lucky Strike USA Guido Bug and a Lucky Strike USA Fighting Craw. Long said he caught about eight keepers today – one of which rewarded his diligence.

“The first fish I hooked this morning was hooked on the outside of the mouth, and I lost him,” Long said. “Luckily, Lord willing, I came back to that spot this afternoon with about 45 minutes left, and I

caught that same fish in about five minutes.”