Champlain was a pain 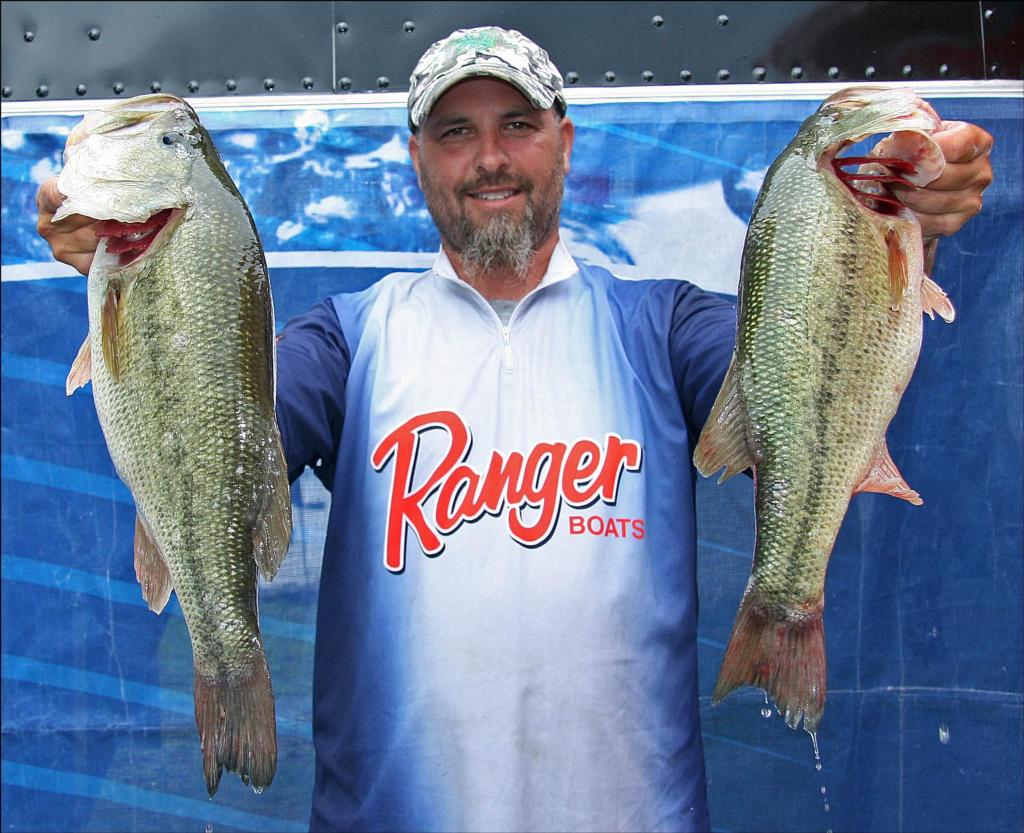 PLATTSBURGH, N.Y. – Those who were hoping for some wind, got their wish on day two of the American Fishing Series Northern Division event on Lake Champlain. By day’s end, many were probably wishing they hadn’t wished quite so hard.

Following an unusually calm day one marked by bright, sunny skies and a mostly smooth lake, day two stood in stark contrast with cloudy skies, frequent showers and a spunky southwest wind. Southerly winds blowing across Champlain’s relatively narrow, north-south orientation really stacks up the waves, so tales of rodeo rides, broken gear and boats taking waves over the bow were not uncommon.

Far fewer boats made the long run south to the fertile grass beds of Ticonderoga. Those who fought their way down and back caught their targeted largemouth, but boat positioning remained a constant struggle. Those who stayed north fared no better. Rough water generally stimulates a good smallmouth bite, but the wind and waves did their best to stack the deck against fishermen.

Champlain yielded plenty of quality fish on day two, but compared to day one, the stats were definitely. Today, pros caught 580 fish with a total weight of 1,413 pounds, 14 ounces and 109 limits. That compares 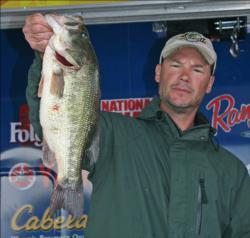 Despite the adverse conditions, pro leader Tom Belinda bagged the day’s only limit to break 20 pounds and rose 26 notches to the top spot. Adding his 20-11 to his day one weight of 17-8 gave him a 38-3 total.

Targeting an underwater point that had not attracted much attention, Belinda caught about a dozen fish. The action, he said, was sporadic throughout the day. 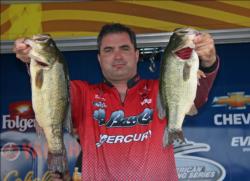 “It was a southwest wind and I kind of hugged the New York shoreline as tightly as I could,” he said. “It was rough, but I gave myself 2 1/2 hours to run back because I had that big bag so I just took my time.”

Bill Spence of St. Albans, Vt. also improved his position on day two – rising from eighth to second – and he also tallied a 38-3 total. Second day ties are broken by the heaviest single day weight and Belinda’s 20-11 edged Spence’s day one weight of 19-10. (Spence caught a day two limit of 18-9).

Fishing a green pumpkin chatterbait with a Berkley Chigger Craw trailer, Spence targeted a mix of hydrilla and milfoil in 4 feet of water on the Vermont side. He caught his fish deeper on day one, but with today’s dimmer lighting and rough water, the fish were not locked into the cover as much.

“Yesterday, they were deeper and relating to structure,” Spence said. “Today, they were scattered. They were roaming a little more.”

Spence said he caught about 20 fish before the weather prompted him to close up shop. “The (bite) wasn’t 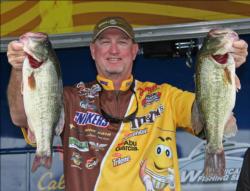 fast and furious, but it was steady. I stopped fishing my stuff about 10 o’clock. The skies were looking bad, so I started coming back.

Trailing the top spot by just 7 ounces day one leader Greg Pugh slipped to third with a total of 37-12. Pugh’s day one weight of 21-2 remains the tournament’s heaviest bag. He added 16-10 on day two.

The Cullman, Ala. pro returned to Ticonderoga and flipped the grass where he caught his day one fish. Pugh said that today’s wind significantly challenged his boat positioning, so he had to get creative with his presentations.

“The wind was blowing me right down onto my spots and without my Power-Poles installed on this boat, I wasn’t able to sit still and fish,” Pugh said. “At times, I would hold my boat backwards into the wind where I could sit off the front and make the casts and let my bait soak a little bit.

“Then, at times, I’d just work at an angle and zig zag across the grass, instead of sitting there and working into the wind. That way I could work my bait a lot better.”

Pugh worked a jig and other undisclosed flipping baits and caught about 20 fish. “I was culling by 8:30 this morning.” 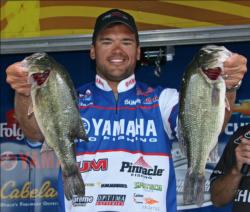 After a successful day one down in the Ticonderoga grass, North Carolina pro Dave Wolak decided to spend more less time running and more time fishing on day two. He returned to some of the northern waters where he found good fish in practice and sacked up a limit of 17-7. Along with his day one score of 19-15, Wolak tallied a 37-6 total.

“The wind made it difficult to even choose where you were going to fish,” Wolak said. “I kept at it and left about an hour and a half to two hours early because I didn’t know what the wind was going to be like and the lake was surprisingly calm (in the afternoon). I started second guessing myself and thinking maybe I should have gone down (to Ticonderoga). But I think it’s going to blow again tomorrow, so I’m glad I stayed up north because I learned a little bit more about it.”

Fishing in 10-12 feet, Wolak fished plastics and spinnerbaits today. He stayed busy with quality fish, but a kicker eluded him.

“I caught all 3 1/2-pounders and by the end of the culling day, they were all the same size,” said Wolak, whose 6-1 on the first day took Big Bass honors. “I couldn’t find a big fish, but if I can put together a day (tomorrow) with a couple of big fish, it could be all over.”

After day one, Wolak sat in the bottom spot of a 3-way tie for third, so his fourth place finish on day two was actually an upward move. 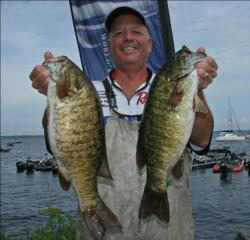 Jeff Misaiko of Tolland, Ct. caught the day’s biggest co-angler limit – 17 pounds, 2 ounces – and improved from eighth place to first with 33-10. Dropshotting in about 25 feet of water produced all of Misaiko’s fish.

Misaiko’s action started early and he had four keepers by 8:30. He had another flurry of activity around 11 a.m. Intrinsic to his success was keeping his baits on the outer edge of grass beds.

“Staying along that grass edge was quite critical,” Misaiko said. “As soon as we drifted out of it and we couldn’t feel the grass anymore, the bites stopped for us.”

“I have to really thank my boater, Tom Mason for putting me on the fish today – I couldn’t have done it without him. He stayed on the spot to get me more fish. He did everything he could to keep me on the fish.” 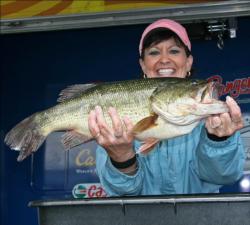 Larry Evans of Southpoint, Ohio took second with 32-13, while Masahiro Yanase of Knoxville, Tenn. placed third with 31-7. Marty Gutzman of Deep River, Ont. was fourth with 31-3 and John Woodroof of Lynchburg, Va. finished fifth with 30-11.