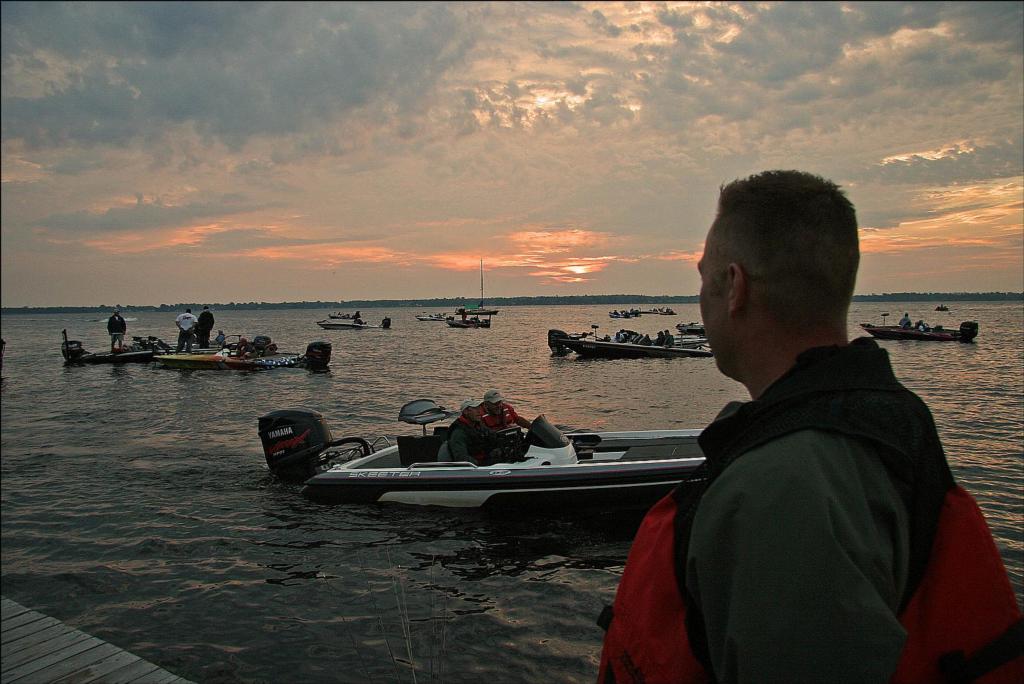 Awaiting his boater, a co-angler gazes toward the clouds building over Lake Champlain. Photo by David A. Brown.
Shifting weather presents limitations and opportunities on Champlain
July 16, 2010 • David A. Brown • Toyota Series

PLATTSBURGH, N.Y. – July 16 will likely be a day of change in Plattsburg, N.Y. The weather is definitely going to change and that means a likely change in the largemouth/smallmouth focus, as well as probably shifts in the FLW American Fishing Series Northern Division leader board.

After a sunny and nearly flat day one, the field launched under cloudy skies with a southerly wind that will blow 15 knots or more. Today’s forecast calls for thunderstorms by mid-morning. So, basically, Lake Champlain will be a washing machine today.

Now, here’s how the changes will occur. First, the weather will limit the longer runs, at least in terms of fishing time. A boater may be able to reach a distant spot, but travel time will be nearly double what it would 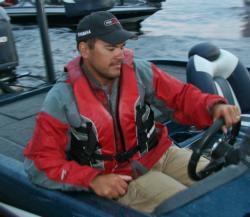 have been on the calmer day one. That means time management will be key today, as anglers will have to calculate the risks of investing more time running for less time fishing in what they may believe to be a promising area.

The prime example is the Ticonderoga area at the lake’s narrow southern end. The dense grass beds hold loads of big largemouth and most of the top-five fish came from southern waters in and near the “Ti” grass. To say that this area is unreachable today would be an overstatement, however, many who fished south on day one, will stay north today.

One of those anglers is David Wolak, the North Carolina pro currently tied for third with Harold Marietta and Darrin Schwenkbeck. Yesterday, Wolak sacked up his 19-pound, 15-ounce limit of green fish by fishing Texas-rigged Yum Dingers around the grass. His first fish of the day – a 6-1 largemouth that hit a blue back Spook – earned Big Bass honors. 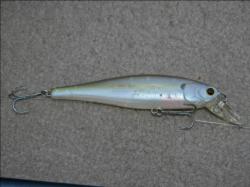 Today, Wolak will adjust his focus based on the weather. “I’m not going to make the run (to Ticonderoga) because I think that making the ride back is going to be the problem. This is going to be one of those days when I’ll be happy to be running a Ranger boat – especially a 21-footer.

“These are the days when the wind blows and the smallmouth tend to bite. They’re very weather-oriented and I felt yesterday was a better day to largemouth fish, especially around the matted grass and heavy cover.”

Wolak said the largemouth buried deep in the cover once the mid-morning heat started building. With today’s cloudy skies, lower heat and rough water, he expects to find smallies and largemouth relating more loosely to cover. In such conditions, moving baits are typically more effective. Productive options will include jerkbaits, crankbaits, spinnerbaits and even buzzbaits. 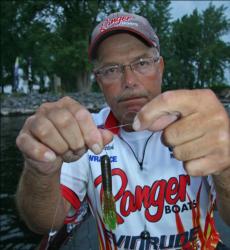 he’s found a way to increase the action and tempt those aggressive smallies.

“In practice, I was catching them on a conventional dropshot with gobies and things like that, but they wouldn’t bite that (on day one),” he said. “So, I went to drop-shotting a tube and the erratic action is what they liked. That’s what I caught all of my fish on yesterday.”

Welch expects the smallmouth to be more active today and he’s hoping that gives him more opportunities.

“They bite better in the wind,” he said. “It had been windy in practice and yesterday was abnormally flat, so I think the bite will come back. They’ll be chasing more and it should be a better day today.” 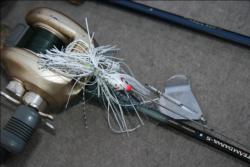 Welch will fish the north end of the Lake in 8-14 feet. “When I first got here (in practice), they were shallow – 4-6 feet. But they’re moving out to their summer resting places.”

Leading the pro field with 21-2, Alabama pro Greg Pugh caught his fish south on day one. He said he’d have to see what the lake allowed on day two. Pugh noted that he backed off of his fish once he thought he had what he needed. Wolak said that, particularly in today’s conditions, he’ll keep casting until he’s out of time.

“Many times, I’ve tried to save fish and it’s come back to bite me, so I’m not going to stop until the end of the day,” he said. “I’m hoping to get 20 pounds today. There’s plenty of 20-pound bags around here and there’s tons of 4-pound (smallmouth).”

Anglers will takeoff and weigh-in at the Plattsburgh Boat Basin located at 5 Dock St. in Plattsburgh, N.Y. Takeoff will be at 6:00 each morning while weigh-in will begin at 2:00 p.m. daily. Takeoffs and weigh-ins are 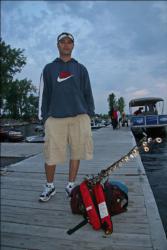 free and open to the public.

The Lake Champlain American Fishing Series tournament is being hosted by the City of Plattsburgh and the Adirondack Coast Visitors Bureau.