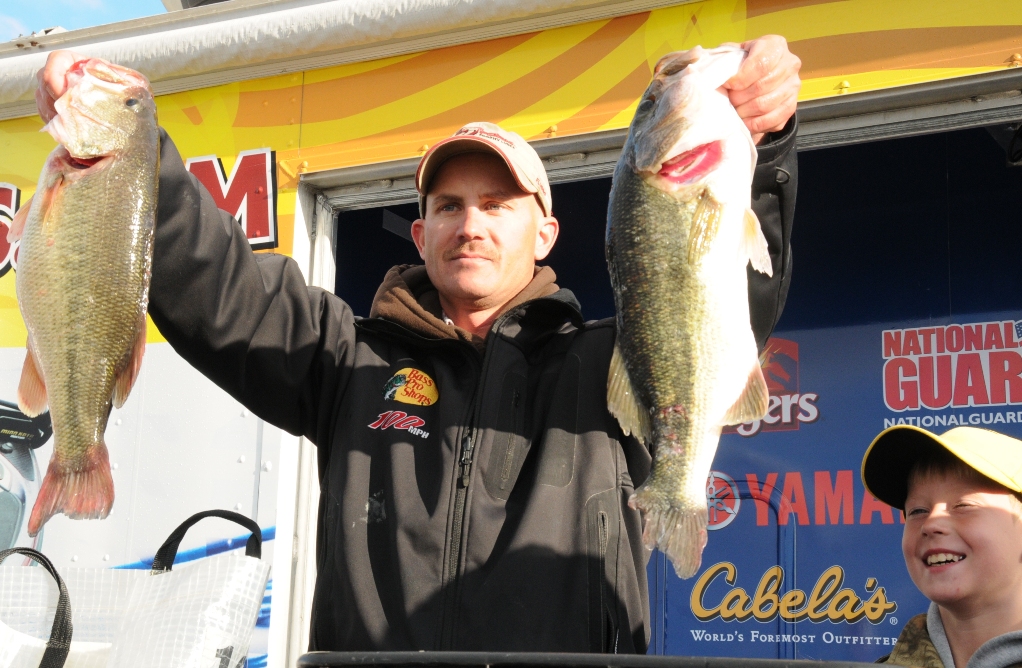 DECATUR, Ala. – If the wind had quit blowing for a minute at the American Fishing Series Invitational weigh-in today, most of the competitors at the holding tanks probably would have fallen forward like dominoes.

For two days the wind has howled out of the northwest on Wheeler to the tune of 15 to 25 mph and those fishing the tournament have been leaning into it trying to hold on a fishing spot.

Today several anglers noted that the strong current which had been running hard yesterday slacked off today leaving some bags a little lighter.

Still leading the event is Chad Aaron of Ethridge, Tenn.,

Overall the fishing was a little tougher on Aaron, but then again he purposely stayed off his grade-A sweet spots since some boats were lurking in his area and he didn’t want to give anything away.

“I did try two of my better spots, but they weren’t near as productive today and a lot of that has to do with current,” Aaron said. “The current did not run near as hard today and the bites were few and far between.”

“Based on the forecasted generation schedule, it looks like they are really going to be running water hard again tomorrow,” he added. “That would certainly be a big help for me.” 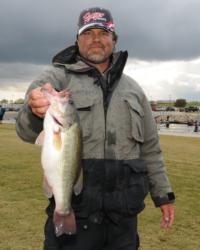 Kevin Snider of Elizabethtown, Ky., is in the runner-up spot with a two-day total of 26 pounds, 7 ounces.

Snider spent another day fighting waves and getting his feet soaked with rollers while trying to hold his spot on the ledges. His efforts paid off with 11 pounds, 11 ounces today.

“There was not as much current today,” Snider confirmed. “And the waves were coming at me from a different angle so holding the boat today was a lot more difficult than yesterday.”

As for lures, Snider stayed with his hand-poured ¾-ounce football-head jig tied in black and blue with a green pumpkin Prowler Flappin Craw trailer fished on 12-pound test fluorocarbon. 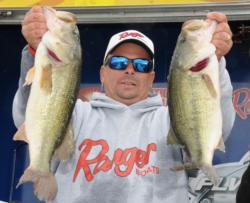 Darryl Folse of Addis, La., brought in the biggest limit of day two – 15 pounds, 6 ounces – to jump into third place with a two-day total of 24 pounds, 14 ounces. His limit included the big bass in the Pro Division weighing 4 pounds, 9 ounces.

Folse is fishing in a major creek up the river, staying out of the wind up against the bank.

“I’m flipping a jig to laydowns that run out into about 15 feet of water,” Folse said. “The water in there is dirty so a jig has been the best lure.” 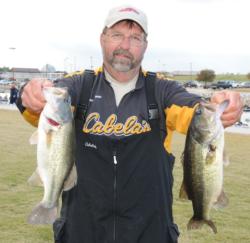 Bill Chapman of Salt Rock, W.Va. weighed in a solid limit for 13 pounds, 9 ounces on day two to move into fourth place with a two-day total of 23 pounds.

Chapman is a jig flipper at heart, but ironically he’s catching fish on a topwater in this event.

“They’re not really schooling, but I can pull them up with a spook,” Chapman said. “Once I get one to bite, it fires the rest of them up and they’ll bite, too. I caught a limit in about five minutes this morning – all on top.”

Rounding out the top-10 pros in the FLW American Fishing Series Invitational after day two:

The day-one leader in the Co-angler Division – Andrew Luxon of Richmond, Ky. – caught 11 pounds, 11 ounces on day two to maintain his lead with a two-day total of 25 pounds, 1 ounce. 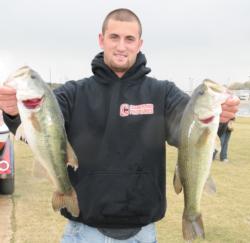 Luxon jigged his way to success on day one but says he had to change things up on day two to catch his fish.

Steve Gregg of Florissant, Mo., is in second place in the Co-angler Division with a two-day total of 23 pounds, 9 ounces.

Gregg found his success on jigs and topwaters today.

“I’ve had two great partners so far and they’ve both turned me onto to the right stuff to be throwing here,” Gregg said.

Anthony Goggins of Auburn, Ala., held onto to the third place spot in the Co-angler Division with a two-day total of 19-6.

Steve Harwood of Weaverville, N.C., is in fourth place in the Co-angler Division with a two-day total of 17-7

Jeff Sprague of Forney, Texas, rounds out the top five in the Co-angler Division with a two-day total of 16-8.

Rounding out the top-10 co-anglers in the FLW American Fishing Series Invitational after day two:

Day three of the American Fishing Series Invitational will continue on Saturday morning at 7:15 a.m.