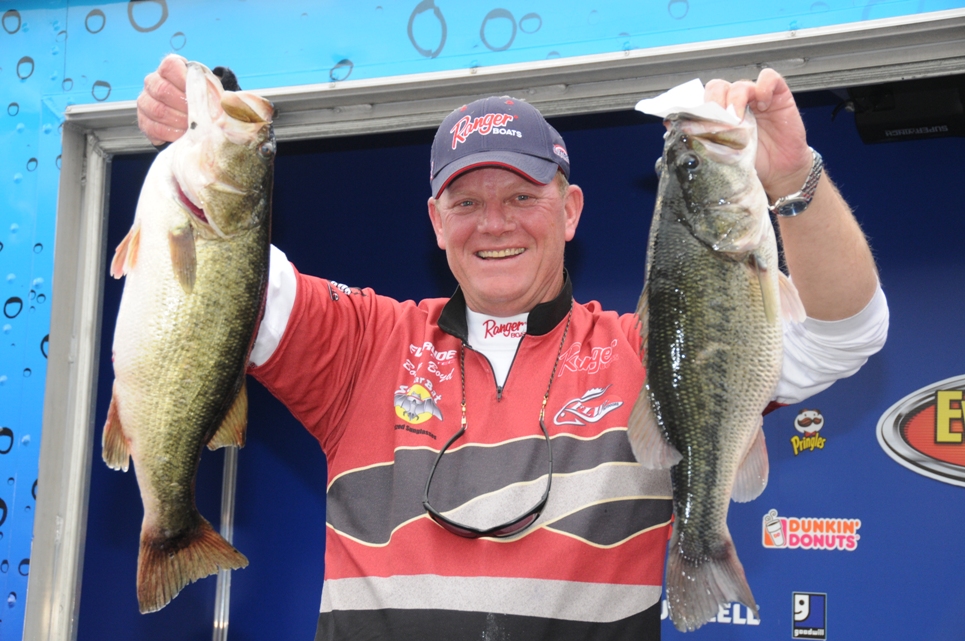 GUNTERSVILLE, Ala. – While many were hoping that the EverStart Southeast event on Guntersville would play out similarly to the first FLW Tour event on Okeechobee in terms of timing and multiple monstrous limits, that was not quite the case.

Indeed, G-ville handed out nine 20-pound-plus bags, which is not too shabby, but considering the big warm-up the Southeast has experienced over the last week, it’s safe to say the barrage of big bass this famed fishery is known for did not blow up as hoped.

The guesses for why more big limits were not hauled in today abound. For one, heavy south winds played havoc on many contestants, not only keeping them off their fishing spots, but causing an extreme number of mechanical difficulties throughout the field.

Others were plagued by lots of fish, but no big ones.

Perhaps tournament leader Robert Boyd of Russellville, Ala., ventured the best theory on why things were slower than expected when he said, “The pockets warmed up so fast, I don’t think the bass have even realized it yet.”

Boyd’s leading catch of 29 pounds, 3 ounces is proof that he just might be onto something with his theory, especially since he caught all his fish by fishing “out.”

While others are fishing up shallow, waiting for the stampede of big bass, Boyd is patiently working out deeper on primary channel breaks.

“I’ve got a bad shoulder and a bad wrist,” Boyd said. “I can’t stay in there and crank and wind all day, so I’m kind of forced to stick to my game and fish out deeper on some of the traditional migration routes these fish use before moving up.”

Boyd caught his leading weight despite having trolling-motor issues that cost him some fishing time.

“I really wanted to bust 30 pounds today,” Boyd added. “I think I could have done it if my trolling motor had hung in there. But I’ll take what I’ve got for a start.” 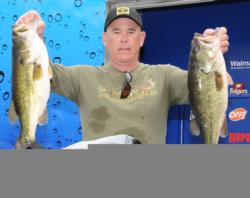 Rick Williams of Decatur, Ala., is in second place after day one with five bass weighing 23 pounds, 15 ounces.

“It’s all about the rattle bait for me,” Williams said. “I just stayed with it and probably went through about three limits of fish. My second place during the middle of the day was the better of the three areas – it’s got a pretty good school of fish on it, and hopefully some more will show up there tomorrow.” 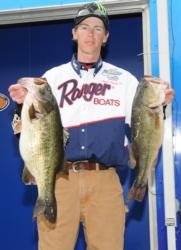 Clark Smith of Pell City, Ala., is in third place with five bass weighing 23 pounds, 9 ounces. His limit was anchored by an 8-pound, 4-ounce monster that took Big Bass honors on day one worth $300.

While Smith said he did throw a rattle bait some, he is mixing it up with other lures as well. Also, he noted that he’s fishing about 10 feet of water, a little deeper than some of the shallower trapping flats.

“I basically stayed in one area all day,” Smith said. “I’m waiting for them to come up and feed. I probably went through five limits of fish today, but the bigger ones bite in flurries. I’ll catch a couple of nice ones, then there will be a long lull, then I’ll catch another couple of good ones.”

Smith added that he feels good about his area for the next couple of days. His co-angler caught 19 pounds today, meaning 42 pounds of bass came from his spot. 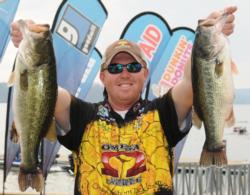 Casey Martin of Huntsville, Ala., is in fourth place with five bass weighing 23 pounds, 6 ounces.

Instead of milking just one or two spots like some of the other leaders, Martin said he had to put on the run-and-gun with a variety of baits to catch his fish.

“The five keepers I weighed in came on five different baits,” Martin said. “I used a swim jig, a football jig, a jerkbait and a rattle (bait). I probably hit 10 to 15 spots and wanted to fish even more spots, but a little motor issue kept me from moving around as much as I wanted.” 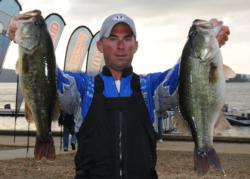 Jake Morris of McKee, Ky., rounds out the top five after day one with five bass weighing 23 pounds, 2 ounces.

Morris has been on a nice roll recently, winning a BFL Regional last fall and then posting a top-10 finish in the FLW Tour event on Lake Okeechobee last month.

Today, Morris covered a lot of water, “chucking and winding the whole time with a trap and crankbait.”

“I caught a limit on my best spot by about 9 a.m., and then I left it alone,” Morris said. “I didn’t want to pressure it too hard on the first day, so I eased off early. But tomorrow I’m going to push it a lot harder in there to see what the real potential is and try to make the top 10.”

Rounding out the top 10 pros in the EverStart Series event on Lake Guntersville after day one:

Steve Keller of Bethel, Ohio, leads the Co-angler Division of the EverStart event on Lake Guntersville with a whopping 24 pounds, 14 ounces. 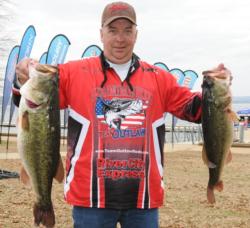 In second place in the Co-angler Division is Alex Posey of Roswell, Ga., with a limit weighing 22 pounds, 15 ounces. 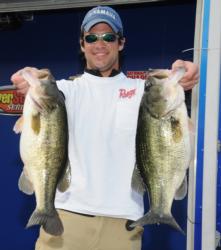