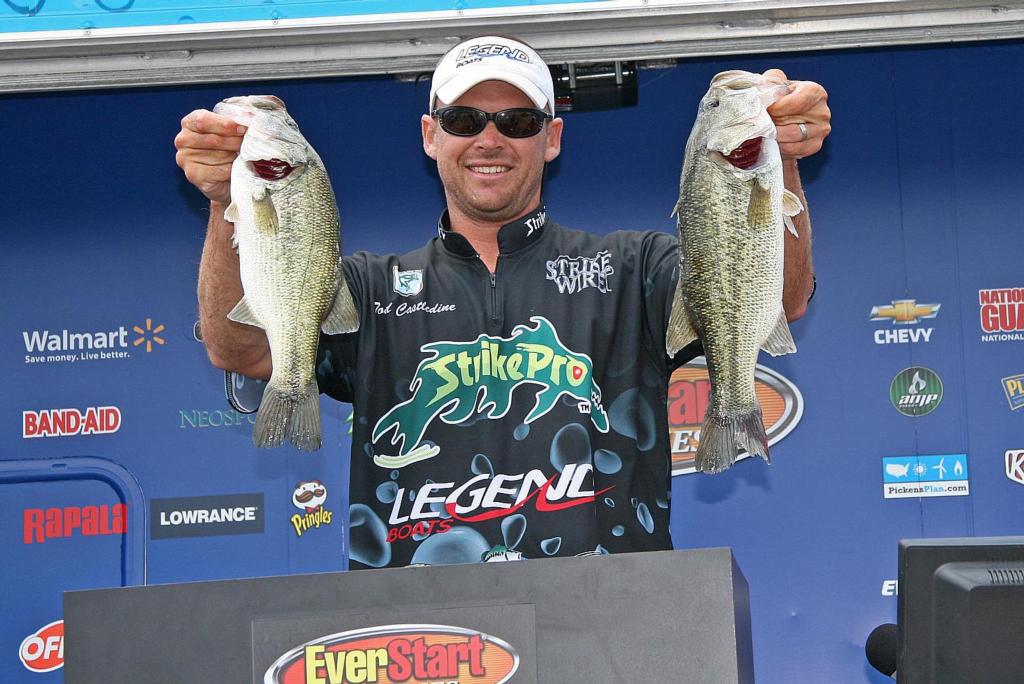 DENISON, Texas – Winds in excess of 20 mph and waves up to five feet – that’s no fun. However, the blustery conditions actually proved helpful to Todd Castledine, who topped the pro field of the EverStart Texas Division event on Lake Texoma.

“I think the wind helped me slow down a little bit because I fish so fast,” Castledine said. “I just didn’t want to get out there and run in it, so the wind just helped me stay grounded and just keep on fishing.”

Hailing from Nacogdoches, Texas, Castledine added a limit of 14-10 to his day-one weight of 16-7 for a total of 31-1. He was understandably guarded about his fishing area and what he threw. However, describing his bait as a blend of reaction and plastics, Castledine said his day two area was new territory for him.

“I really didn’t know what was there – I just left it alone (earlier) and just found it out today,” he said. “I 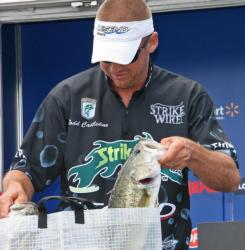 had never thrown this bait in practice and I never threw in this area. I kinda fished around the area; I was sight fishing for some of them.”

Castledine said he essentially started over today out of necessity. Although he caught quality fish on day one, his bite was slow and he missed his limit by one.

“I knew I had to do something different because everything I did in practice wasn’t working,” he said. “I knew I could catch sight fish – I caught four yesterday and I lost one, so that really wasn’t enough to go out there and do it again.

“I really wasn’t ever on a pattern since I’ve been here. Last night, for whatever reason, I didn’t get much sleep. I stayed up thinking and I came up with an idea. I started off about 8:30 with it and I caught two big ones right off the bat. I caught another one and then I just did this the whole day. It just seemed to work.”

Castledine said he caught eight fish and his bites were spread throughout the day. He stayed in one large area about 10 minutes from the launch site. 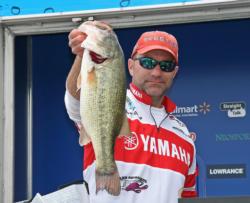 “I found these fish by throwing a chatterbait in practice, but it changed up a little bit and I’ve been catching them on a Texas-rigged worm.

Vining said he’s excited about fishing day three because the area in which he caught his day two fish seems to have a growing number of quality bass. “I have a spot that’s replenishing and it’s getting better and better.” 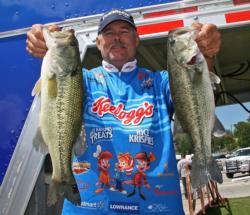 of him and dropped the Longview, Texas angler to third place with 24-12.

“It was very slow for me today,” Tutt said. “It was windy, but the wind didn’t affect my fish as much – I just couldn’t move around as much as I wanted to. It was taking too much time to move. I had to fish areas that weren’t as productive as I needed them to be. I had four bites and I caught three.”

Tutt fished a Zoom trick worm on a Gambler Giggy Head all day and targeted flat, slick banks. Unlike the chunk rock and wood that many other competitors were fishing, Tutt’s preferred bank seemed to attract post-spawn fish.

“The bream are spawning and I think a lot of those post-spawn fish are just roaming and chasing bream – not necessarily to keep them off beds, but to eat them,” Tutt said. “I never felt the bites, I’d just pick the line up and they’d be swimming off.”

McFarlin brushes up to fourth 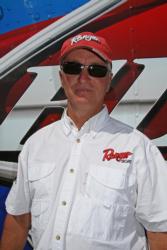 Moving up from 14th place to fourth, Godonville, Texas pro Don McFarlin sacked up 10-6 and tallied a 21-14 total. Local knowledge guided McFarlin to about 100 different brush piles in the lake’s western reaches.

“I’m local, so I know all of the little spots,” he said. “I just dabbled, got lucky and put it together.”

McFarlin caught all of his fish on Texas-rigged worms and a spinnerbait. 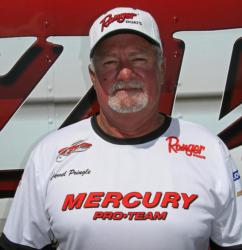 round berth with a late day catch that pushed his two-day total to 21-0.

“I basically ran from one end of the lake to the other,” Pringle said. “With about an hour and a half to fish, I ran from above the second bridge on the Washita to above the bridge on the red river and caught a 3-pounder. That’s why I made the cut.

“That’s the way this lake fishes. If there’s a log laying somewhere, you’d better crank up and go check it out.”

Starting day two in 20th place, Pringle said he started early on top with a Zell Rowland Pop-R. Later, he worked rocky points with a Bandit crankbait and drug a Carolina-rigged Speed Craw across brush. 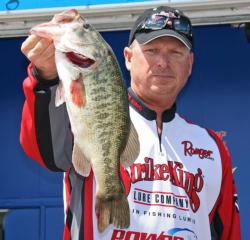 Compared to day one, today was nearly a bust for Kenny Moser. However, the Alba, Texas co-angler’s first round weight of 13-11 had given him a lead of 3-6 and that cushion helped keep him on top when his day two effort yielded a lone with that weighed 1-11.

Moser will lead the co-angler field into day three with a margin of 1-5.

Greg Swindle, of Katy, Texas placed second with 14-1; Lat Nichols, of Deport, Texas finished third with 12-13; Trevor Rogge, of San Antonio, Texas took fourth with 12-10 and Darren Scott, of Fort Worth, Texas was fifth at 12-8.

Rounding out the top-10 co-angler leaders at the EverStart Series Cal Delta event:

Robert Patton won the Snickers Big Bass award with his 5-11.