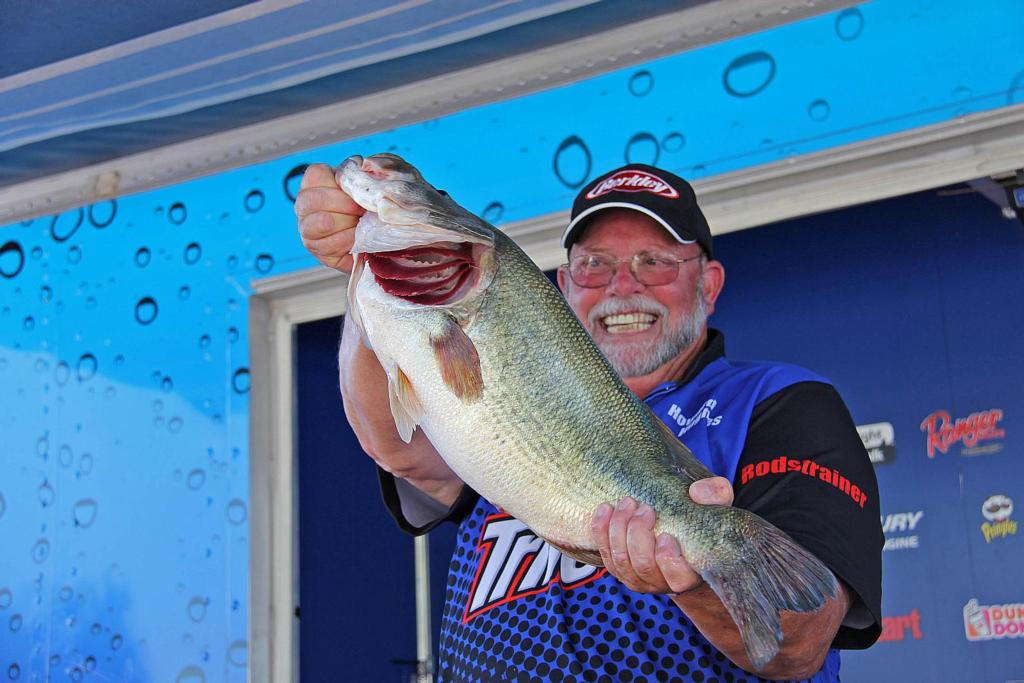 This whopping 10-pounder bouyed the leading bag for Howard G Hughes on day one at Clear Lake. Photo by David A. Brown.
September 22, 2011 • David A. Brown • Archives

CLEARLAKE, Calif. – In competitive circles, the term “fish factory” isn’t handed out lightly, but for EverStart Northern Division anglers plying their craft on the Golden State gold mine known as Clear Lake, the term fits.

After a practice week that produced reports of anglers stacking up big numbers on a variety of tactics, many were left to wonder if the show would live up to its previews. Well, we can wax poetic on how the pride of Northern California lived up to the hype, or we can just look at the numbers. Since the latter never lie, that’ll be our course.

On the pro side, 80 anglers caught their 5-bass limit, with 25 sacks breaking the 20-pound mark. Run all the way down to 65th place and we still see 15 pounds. Big fish on the pro side – that was the 10-pounder caught by division leader Howard Hughes, whom we’ll get to shortly.

Co-anglers put on quite a show as well, with 40 more limits coming from the back of the boats. Four co’s broke the 20-pound mark and it took 19-1 to make the top-10.

Now, if it sounds like an all-out whack fest, it should be noted that such was certainly the case for some, while others reported a lot of looking and casting to manage only a handful of keeper bites. Often, the low productivity was a function of big-fish tactics. Some anglers spent a lot of time walking topwaters or slinging swimbaits. Both tactics hold homerun potential on Clear Lake, but there’s often a 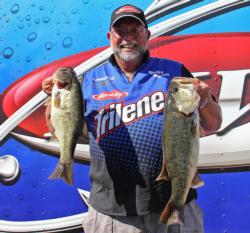 lot of time between bites.

Hughes, who hails from Redding, Calif., took a different and obviously effective course. A self-proclaimed finesse specialist, he stuck with small presentations and sacked up a limit that went 25-10. Fishing six-inch worms on an undisclosed rig, Hughes used 8-pound line and that made for an interesting moment when the big fish decided to bite.

“It was quite a lot of fun – it scared us to death,” he said. “It was my first fish of the morning, on my third cast.”

Mostly targeting rocky ledges in 10-15 feet, Hughes sat on one spot until about 1 p.m. and diligently worked his finesse technique. His strategy was to give the fish a more subtle look than much of what they had seen throughout an intense practice week.

“There’s been a lot of pressure on the lake, so I thought I’d stay with that and see what happens,” he said. “So far, it’s working out.”

Today saw minimal breezes with temperatures in the low 90’s. The hot, still conditions were atypical for late summer on Clear Lake and Hughes said the bass seem to be push ahead with their seasonal transition. Big schools of shad, hitch and silversides are moving progressively shallower and the bass are in hot pursuit. Therefore, Hughes said that positioning himself in the transitional zone was key. 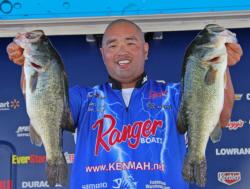 “They want very much for it to be fall, so they’re staging on the bait coming (into) the shallows,” he said. “I stayed right near 25 feet all day.”

Trailing the lead by just 10 ounces, Ken Mah of Elk Grove, Calif., set the bar high in the first few minutes of the weigh-in by bringing 25 even to the scales. He started his day by throwing an old-school double prop bait and occasionally switching to a swimbait. Ultimately, Mah did most of his damage by flipping an orange craw.

“It’s kind of ugly, but I think it’s different,” he said. “I like throwing different baits. Everybody’s throwing the same bait – I get away from it and throw something else.”

Mah said his decision on when to switch from topwater to flipping was based less on conventional wisdom of going subsurface as the sun ascends and more on habitat. “I have a little something figured out on where they want to be. I can look at a spot and pull up on it and catch fish. It’s location.”

Although clearly pleased with his day’s ultimate result, Mah said it began in lackluster fashion.

“I caught 11 all day, so the bite’s not on fire for me,” he said. “The first two hours were kind of dead for me. I was throwing a big topwater bait, looking for a couple of big bites.” 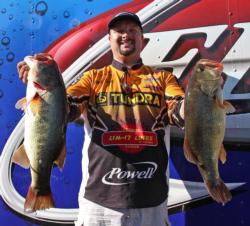 Michael Tuck of Granite Bay, Calif. turned in a third-place bag weighing 23-13. Tuck said he began his day shallow with reaction baits but when his first two spots failed to produce, he moved out deeper and started catching fish on a mix of dropshots, wacky rigs and Carolina rigged brush hogs.

“The fish are moving up and down, so you have to pay attention to the bait and water color,” he said. “You have to keep checking shallow and keep checking deep. They just show up on spots at different times of the day and if you catch one, it fires up the school and you can catch 15 in a row. 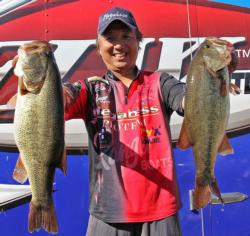 “Early, I fished grass and tules and in the afternoon, I fished rock piles – the (windward) side,” he said.

Kodama noted that with many anglers fishing close to the structure, he found that his better bites came when he stayed farther away. He caught most of his rock pile fish in 13-14 feet of water.

Steve Adams, of Discovery Bay, Calif. bagged 22-13 on day one and came in just 3 ounces behind Kodama. Adams said he fished a mix of topwater and subsurface bait. 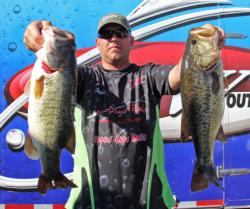 “I was just chasing them,” he said. “If I wasn’t getting bit, I’d move out a little deeper and get one and then move back up.

Mike Bartolomucci, of Winters, Calif. caught a limit of bass that weighed 23-12 and topped the co- 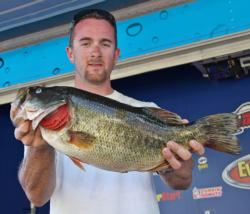 angler division. Paired with California pro Charley Almassey (15th place, 20-12), the leader caught his fish in the lake’s north end in less than 10 feet of water. The anglers were looking for isolated schools of fish that were occupying the channels within grass beds where baitfish were moving.

“My pro put me on good water and told me what to throw and it worked,” Bartolomucci said. “It’s been tough up here. I’ve been practicing in my own boat and I’ve been looking but I never found (big groups of fish) until today. That’s all on Charley.”

Bartolomucci caught his fish on reaction baits. He caught seven keepers, including one that went 7 pounds. 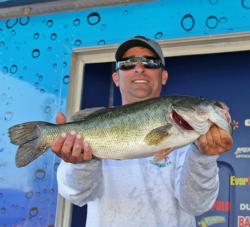