Hippert hops into the lead

Alabama rig back in full swing 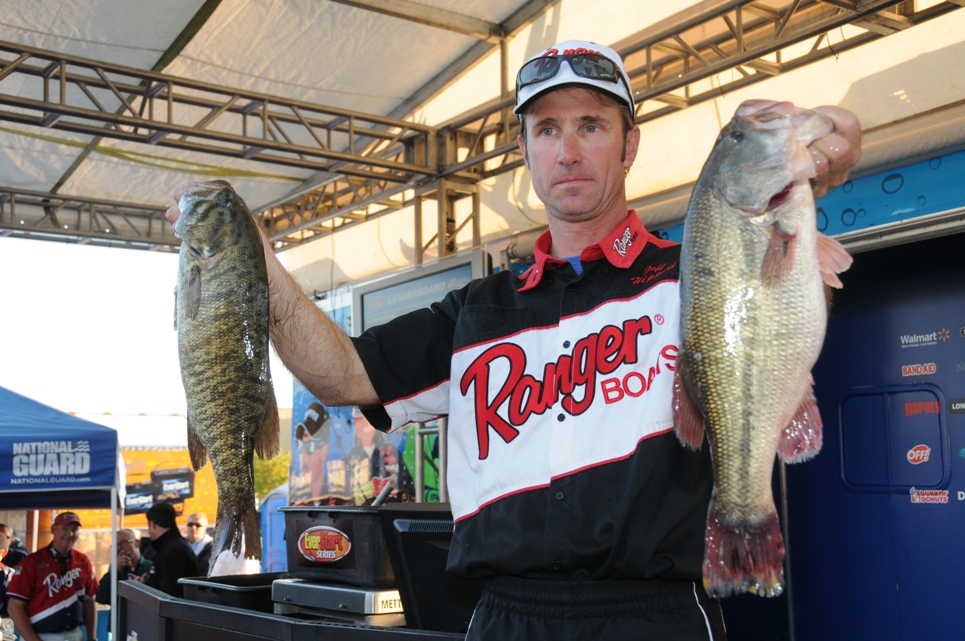 PARIS, Tenn. – The top-20 pros fishing the EverStart Series Championship on Kentucky Lake lost an hour and a half of fishing time this morning due to a fog delay and it impacted the day three results.

Half of the top-10, including two top-5 pros, faltered from lost time and dropped out of the top-10 cut and were replaced with pros in the bottom half of the top-20 that moved up to take their spots.

Not surprisingly, veteran FLW Tour pros are climbing up through the standings with each new day’s challenges and condition changes. Dan Morehead, Koby Kreiger and Jim Tutt just keep chugging away with consistent limits, putting them in third, fourth and fifth respectively.

Also not surprising, the Alabama rig is once again the top technique. Co-angler Troy Anderson of Galesville, Wis., took top honors in the Co-angler Division with it today and four of the top five pros are throwing it. If you want to see the Alabama rig in action, check out FLW Outdoors live video streams on Sunday to see who all is throwing it. Sunday’s morning story will include the list of pros with streaming cameras in their boats, as well as a link to video streams.

Now leading the event is Jeff Hippert of Hamburg, N.Y., who checked in 15 pounds, 10 ounces today to take the lead going into the last day with a three-day total of 45 pounds, 8 ounces.

Hippert is on a strong group of fish as demonstrated by his consistent 15-pound-per-day average and the fact that Anderson won from the back of his boat with an 18-pound, 4-ounce catch today.

Hippert is catching his fish on the Alabama rig, something he had never even thrown until the first day of the tournament.

“I heard all about it after Guntersville, but I did not have one during practice,” Hippert said. “Then we heard the Alabama rig folks were coming over here to sell them so I stood in line and bought some. I went out the first morning of the tournament and caught my first keeper on it on the third cast.”

Hippert is running north and fishing Kentucky waters. He is focusing all his efforts in one bay. Each day he has to make some minor adjustments within that bay in terms of where the fish have moved to, but he is not running long distances up and down the lake.

“I really only have one spot and that really helped me with the fog delay this morning,” Hippert noted. “Instead of wondering about a bunch of different spots, I just stayed in my one area. Each day the fish change in there: some days they’re in the very back of the pockets, some days they’re out on the ends of the secondary points. But having just one area and one lure has helped me settled down and make the right adjustments in there each day.” 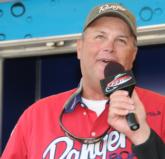 Martin is fishing a big saltwater Zara Spook far south in Tennessee. His pattern has been solid until today when the fish would not completely eat the bait.

“What’s strange is I had more bites on it today, but they were just blasting it out of the water and not getting it,” Martin said. “It was crazy to watch. A couple of times one would blow it out of the water and as soon as it touched down, another one would blast it back into the air. It was a frustrating deal. If I can get them hooked up, I can have 16 or 17 pounds tomorrow.”

Kentucky Lake local and Prevacid pro Dan Morehead of Paducah, Ky., is steadily chugging his way up through the standings with an Alabama rig and consistent, solid limits. Today he caught another 14 pounds, which put him in third with a three-day total of 41 pounds, 15 ounces.

“All around it was a much tougher day,” Morehead said. “I’ve been averaging about 15 keepers a day and today that fell to just six keepers bites. Some of it was the lost time in the fog delay, but some of it was just post-frontal conditions. For the first time this week I could feel fish just kind of nipping at my Alabama rig and not really eating it.”

Koby Kreiger of Okeechobee, Fla., moved into fourth place with a 12-pound, 10-ounce catch, giving him a three-day total of 41 pounds.

When fog delays throw the field a curve ball, veterans like Kreiger know how to compensate to stay in the hunt. And today was an example of that for Kreiger.

“I’ve been running way north and fishing the Alabama rig,” he said. “But today with the fog delay, I decided to just stay close, maximize my time and go to a small flatside crankbait made by Craig Powers to scratch out a limit. I figured a 12 pound limit would move me up a couple spots today and that’s exactly what happened.” 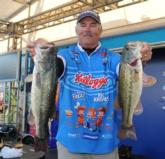 “I mean, yeah, I’m throwing other lures,” he joked, “I threw a spook for four casts today if that counts.”

Rounding out the top-10 pros in the EverStart Series Championship:

The fourth and final day of the EverStart Series Championship begins Sunday at 7 a.m. at Paris Landing State Park.