Morehead is the man 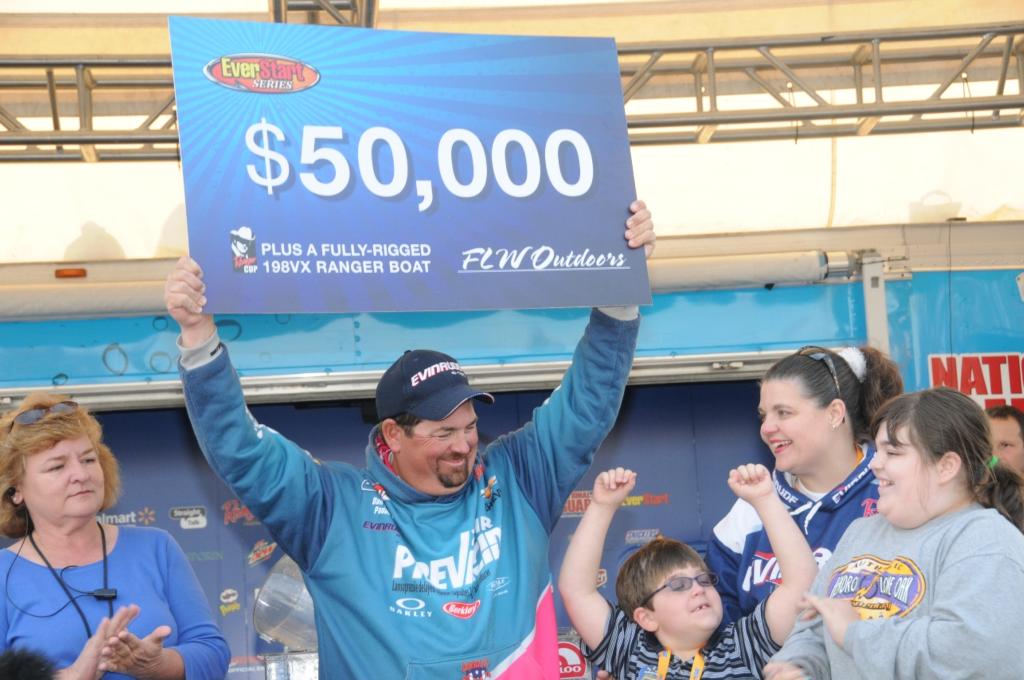 PARIS, Tenn. – Throughout the practice period of the EverStart Series Championship on Kentucky Lake, well-known Kentucky Lake pro Dan Morehead privately maintained that at least one of the four tournament days he was going to go big with the Alabama rig.

“I’ve been to some of my old stomping grounds with the rig, and it’s been unbelievable,” Morehead said before the tournament began. “I’m not going to sit here and say that I’m going to catch 20 pounds on it every day – I think I can realistically catch 12 to 15 pounds a day on it for sure. But at least one of those four days it’s going to get right, and I’m going to have 20 pounds with it.”

And today was that day. After calling his shots with daily catches of 15-3, 12-12 and 14-0 the last three days, Morehead saved the best for last, hauling in a final-day catch of 19 pounds, 5 ounces and giving him a four-day total of 61 pounds, 4 ounces. 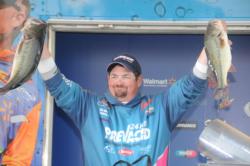 “I couldn’t have scripted the day any better,” Morehead said. “I had one place where I needed a south wind to blow to make it good. I got that south wind today and caught a 6 1/2- and a 4-(pounder) to get my day started. And from there I could do no wrong – it was just my day.”

Unlike others who jumped on the Alabama rig bandwagon in the last several days since the Lake Guntersville FLW Tour Open last week, Morehead has been fishing the Alabama rig since the end of May. He bought his first samples of the multiple-bait rig during a prepractice trip to Pickwick for the FLW event held there in July.

“I brought it back here to Kentucky Lake and could not wait to try it on the deep ledges,” Morehead said. “And honestly, I did not catch the size fish on it that I thought I would during the summer. But once the water began to cool off and the shad started coming up and roaming, it’s become like magic. This is the absolute best suspended-bass technique I’ve ever seen – nothing can beat it.”

Morehead decorated his Alabama rig with 4- and 5 1/2-inch Berkley Hollow Belly swimbaits. He even used the 3/16-ounce jigheads that the Alabama Rig company makes to go on the rig.

“Those jigheads are the bomb,” Morehead added. “The hooks in those things are the real deal. You get a fish on those hooks, and they’re not coming off.”

Morehead stayed in Kentucky waters all week, between the bridges. His best place, which paid off today, was a long, shallow bar that traversed the mouth of a major bay. 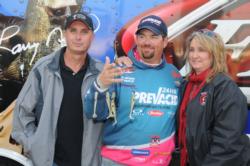 “This bar is shallow,” Morehead described. “With the water down like it is, you can see it. It’s got big rocks up on it, and there were big schools of gizzard shad up there eating the algae off the rocks. The creek channel comes out of the bay and swings right into the end of this bar – and that was the sweet spot. I’d cast up on the bar, wind the Alabama rig fast over the bar, then once it broke out over deep water, I’d let it sink and slow-roll it back. I caught some up on the bar, but most came out deep – from about 15 to 20 feet – out off the break.”

“It’s really special to win at home like this in front of friends and family,” Morehead said. “The money is great and this trophy is awesome, but what I’m really liking about this win is an early berth into the 2012 Forrest Wood Cup. To already have the championship made before the Tour season even begins is huge.” 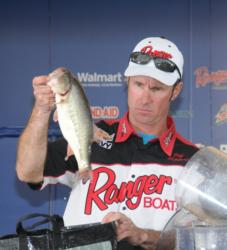 Though Hippert did not acquire an Alabama rig until the night before the tournament, he did throw it all four days. His bait of choice for the rig was 5-inch Keitech swimbaits threaded on 1/2-ounce Buckeye J.Will Swimbait heads.

Hippert fished one bay all week, focusing on 5-foot depths on secondary points on flats.

“The wind really blew in there today,” Hippert said. “I thought that would help me, but I got a lot fewer bites and no big ones at all. All I can figure is the wind must have pushed the shad farther back in the bay. I had been fishing more out towards the mouth of the bay, and they just were not there today.” 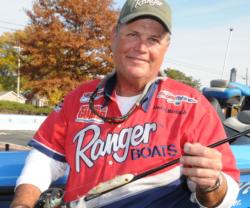 Lendell Martin of Nacogdoches, Texas, finished third with a four-day total of 55 pounds, 12 ounces worth $8,450.

Martin ranks as the highest pro who was not throwing an Alabama rig. Instead he fished a saltwater Super Spook far south on the Tennessee River. His pattern held strong initially, giving him the tournament lead the first two days.

“I was fishing main-river flats and gravel bars that broke off into the main river channel,” Martin said. “I’d make a long cast up onto the visible flat and work the spook off the flat; as soon as it cleared the break, they’d blast it – it was a lot of fun if you like topwater fishing.

“Today, though, there were a lot of those big cruisers going up and down the river,” he added. “After they would go by, their huge boat wakes would wash the mud and silt off those bars, muddying the water – it just kind of ruined my pattern.” 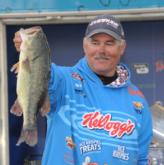 Tutt spent the week throwing a – you guessed it – Alabama rig. Tutt chose Zoom baby swimming flukes for his bait of choice and used the Alabama rig jigheads in an 1/8-ounce size.

“I fished the riprap of three main-lake bridges all week,” Tutt said. “I’d parallel the riprap and slow roll the bait down to about 15 feet for my bites.”

Koby Kreiger of Okeechobee, Fla., rounded out the top five pros in the EverStart Series Championship with a four-day total of 54 pounds, 14 ounces worth $6,750.

And one last time … yes, Kreiger did his damage on the Alabama rig as well, dressing his wires with Luck E Strike swimbaits threaded on ¼-ounce homemade heads.

“I was fishing flats and channel swings in the very backs of pockets,” Kreiger said. “Anywhere where the channel or ditch cut up next to the flat or bank was best.”

Rounding out the top 10 pros in the EverStart Series Championship on Kentucky Lake: