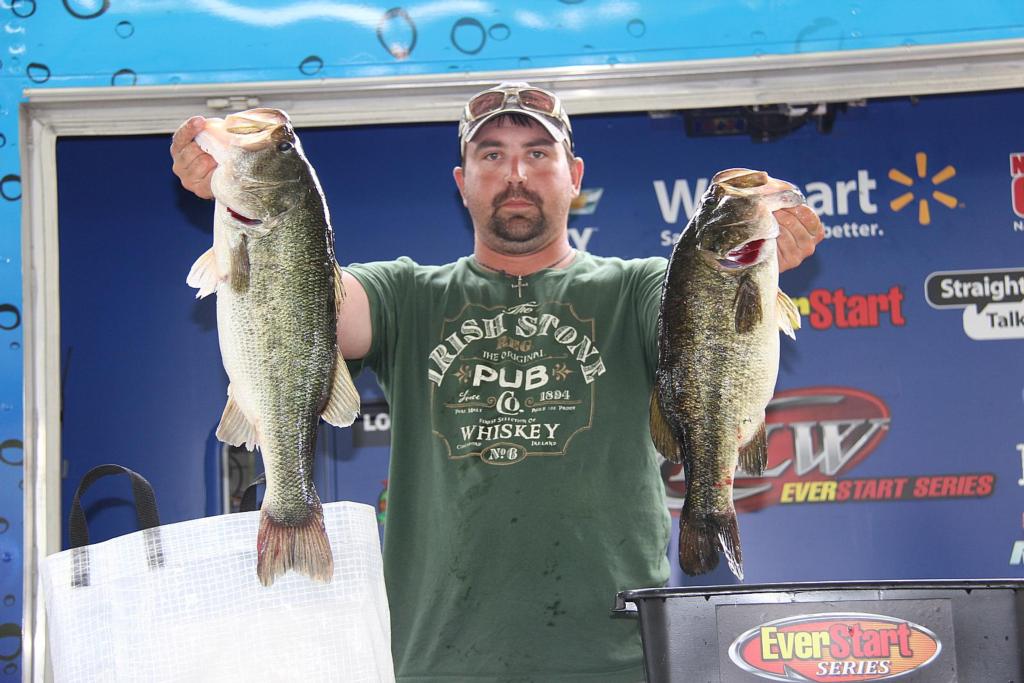 JASPER, Texas – On a day when many searched unsuccessfully for quality amid rampant quantity, Phillip Crelia found plenty of both and grabbed the early lead in the EverStart Series Texas Division tournament on Sam Rayburn Reservoir.

Crelia, who hails from Center, Texas, sacked up a limit that weighed 19-2 and secured the top spot with a lead of 2 pounds, 4 ounces. His day-one effort included a 7-1 that earned Snickers Big Bass honors.

With heavy spring rains raising Rayburn about 13 feet in a short period of time, the fish are scattered throughout a vast range of newly flooded habitat. Many are also holding offshore on deeper structure. The net result for anglers was an often-frustrating search for something worth catching. Anglers stayed busy with little swimmers and reports of 50-fish days were frequent, as pros generated 84 limits and co-anglers added 47. 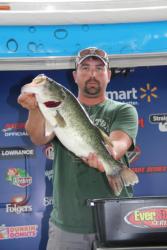 hopefully a kicker. This morning’s cloud cover lasted all day and an east wind grew to about double the forecasted 7 mph. Some anglers who fished offshore reported taking waves over their bows. For Crelia, the day’s weather played right into his game plan.

“The last few days of practice have been really tough,” Crelia said. “I was just praying for the wind and the clouds and I got it. That helped me a lot. It kept me from fishing a few areas, but I knew the type of water they were in and the wind really positioned them.”

Crelia caught all of his fish on a white Spro frog. He likes that color because he believes its higher visibility helps fish locate and target the bait in windy conditions.

“It’s pushing the shad up on the bank,” Crelia said of today’s east wind. “They’re not spawning; they’re just up there feeding”

Crelia said he probably caught 40 fish, but none were more memorable than his 7-1 – and not only because it won the Big Bass award. As Crelia recalled, this fish was so aggressive, his boat got two distinct shots at the big gal.

“My co-angler actually missed her and then I threw in there and caught her,” he said.

Marks grinds it out for second 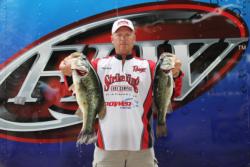 He didn’t have a boring day by any stretch, but Phil Marks said his second-place position was not easily acquired. The Dallas pro sacked up a limit of 16-14 that required a lot of filtering.

My (co-angler) and I probably caught 80 keepers, it’s just a grind to catch one over about 2 1/2 pounds,” Marks said. “I didn’t want to beat my fish up as badly as I did but I was just trying to get everything up to about a 3-pound average. I left a few, but not as many as I’d like to.”

Fuller gets tricky for third 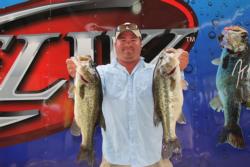 took the third-place spot. Returning to a sport he had found in practice, Fuller was pleasantly surprised at how the quality had improved.

“I got into a little creek channel with a bend where I found some small fish a couple of days ago and they grew up pretty quick,” Fuller said.

Throwing a wacky-rigged trick worm with a 1/16-ounce weight through the grass proved most effective for him. He caught his fish in a range of six to 10 feet.

Fuller said his bites came quickly and he strategically vacated once he had what he felt like he needed for a competitive day-one weight. 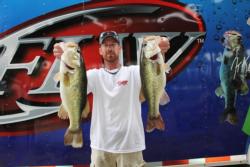 While many of his competitors were fishing on or near the shoreline, Jonathan Garrie, of Nacogdoches, Texas spent his day working depths of 30 feet and claimed the No. 4 spot with a limit catch of 15-6. Garrie said he had dialed in a particular reaction bait presentation that delivered all of his fish today.

“What I’m doing is very specific and it’s really hard to stay on when the wind’s blowing,” he said. “The wind was cranking pretty good this morning and I didn’t even have my first fish until about 11 o’clock.

“I had to adjust a little with this cloud cover and wind. The fish backed off a little bit from where I’d been fishing. They were a lot tougher to catch and there were more small ones mixed in. I caught probably 75 fish today.”

Garrie said he did not think twice about heading offshore when the dominant trend involved shallow patterns. “This is my home lake and I’ve been fishing out there for several years. It’s either hero or zero.”

Austin Terry, of San Angelo, Texas caught a limit of 14-10 and took fifth place. He started his day on 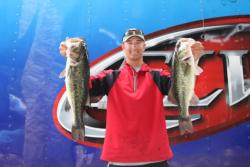 the bank and flipped a Reaction Innovations Beaver and threw a frog, but he had to switch gears and fish deeper with a Texas-rigged 10-inch Zoom Old Monster worm to catch his fish.

“I didn’t get the bites I thought I could shallow, so I targeted some postspawn spots and I got lucky,” Terry said. “It was kind of slow for me but I still caught 15 fish. I probably culled four or five times.”

Rounding out the top-10 pro leaders at the EverStart Series Sam Rayburn event: 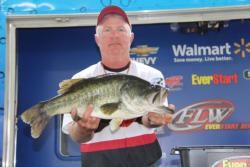 James Bartlett, of Crowley, La. had a big day off the back of the boat with his 16-pound, 13-ounce limit that earned the first day’s co-angler lead by a margin of 1 pound, 12 ounces. Bartlett’s catch included the day’s Snickers Big Bass award winning 8-pound, 14-ounce fish.

“I caught (the big fish) late in the day and I’d had a tough day up until that point,” Bartlett said. “I had a couple other good fish, but I was pleased with that one.”

Bartlett caught the big fish on a Texas-rigged watermelon red Senko in shoreline grass in about three feet of water. All of his other fish came in about 10 feet.

Howard Hartley, of Berwick, La. took second with 15-1, while Benny Aylor, of Round Rock, Texas placed third with 13-1. Allen Wares, of Austin, Texas was fourth with 12-8 and Chad McClendon, of North Richland Hills, Texas had the fifth-place bag at 12-2.

Rounding out the top-10 co-angler leaders at the EverStart Series Sam Rayburn event: