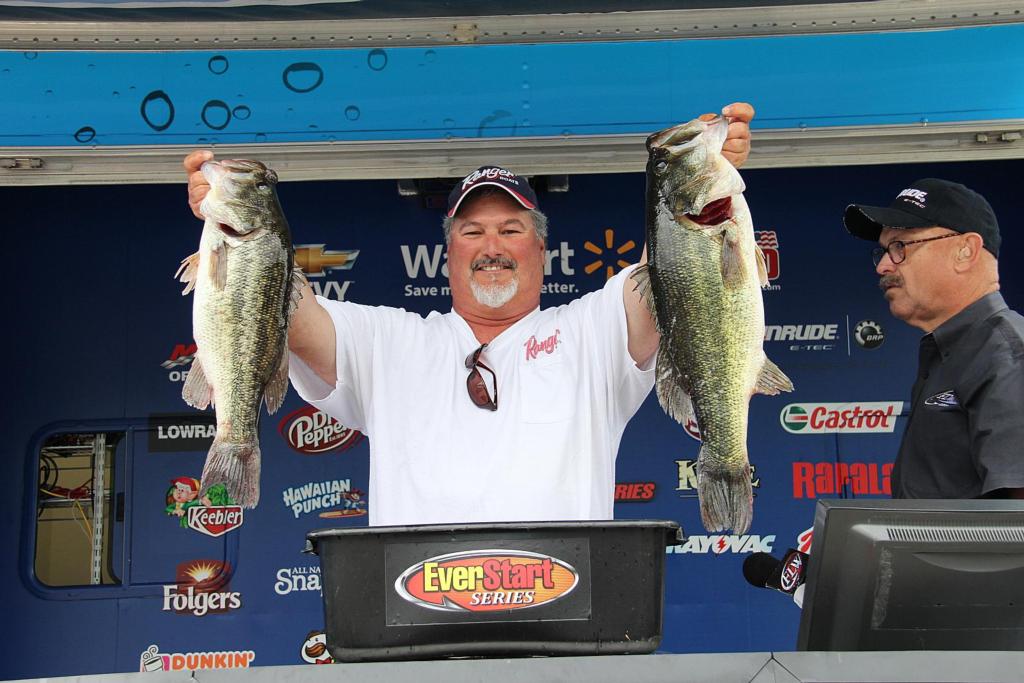 Brent Riley used a combination of reaction baits and plastics to pull ahead on Santee Cooper. Photo by David A. Brown. Angler: Brent Riley.
April 19, 2012 • David A. Brown • Toyota Series

SUMMERTON, S.C. – The Santee Cooper lakes delivered exactly what most anglers expected them to and that meant a handful of big smiles and a whole lot of shaking heads on day one of EverStart Series Southeast Division tournament.

With most of the bass on lakes Marion and Moultrie squarely in their post-spawn phase, anglers found the fish scattered throughout a mix of habitats – mostly the classic “fall-back” spots to which the fish retreat after creating the next generation. Notably, while just about any of the lakes’ deeper grass, lily pads and stumps could conceivably hold fish this time of year, most anglers reported finding fish grouped near specific cover.

The other nondescript element was bait selection. Several reported junk fishing their way to limits 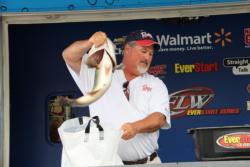 and, while some held their cards low on certain bait specifics, it was clear that no one thing is rocking these ponds.

Brent Riley, of Ridgeville, S.C. leads the pro field by a margin of 2 pounds, 9 ounces with an opening-round limit of 26-4. His bag included one of the day’s largest fish – an 8-9 that bit a spinnerbait around noon.

Riley said that today’s cloudy weather helped his bite, as the fish were a little less apprehensive. Nevertheless, his was a mixed presentation.

“I caught fish on four different baits today,” Riley said. “There wasn’t one specific thing – it was a little 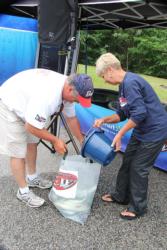 The leader had to work about 20 spots to find his limit today. Although most of his fish were in prespawn mode, Riley said he actually caught one on a bed.

“That was kind of a gift – imagine that,” he said. “I had a very fortunate day. I didn’t cull but one time. The bites I’m getting are good bites. I’m just staying busy and keeping the lure wet.

“They were packed up big time a couple of weeks ago and now they’re all over the place. I live here and I fish here all the time and they’re here one week and the next week they’re gone,” he said. “Hopefully, they’ll stick around this week.”

He was the first angler to cross the stage today and the early lead set by Wade Grooms, of Bonneau, S.C. lasted until the final minutes of day one when his 23-11 settled into second place. 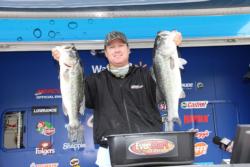 Grooms had to cut his day short when his aerators failed and left his catch in jeopardy. A makeshift fix kept him going long enough to get his fish back to the dock.

“This time of year, the fish are so stressed anyway (from the recent spawn) and this just stressed them even more,” Grooms said. “We had to switch some things around but I didn’t have any wrenches. That just goes to show that you have to be prepared to not only fish, but also to handle mechanical work.”

Grooms also reported using a diverse assortment of lures. “There’s not really one bait that you can rely on. This time of year, it’s mostly junk fishing but it’s more location-specific. With (traditional) junk fishing, you may have to use two or three different baits to get a bite, but you pull up to the right spot and you throw the right bait, you’re going to get bit.” 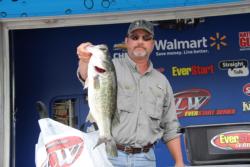 Kent Ware, of Wadmalaw Island, S.C. took third place with 21-12. He caught his fish in shoreline vegetation and found that their general lethargy required concentrated and persistent presentations.

“The fish were kind of tentative,” he said. “They got up in the weeds and they didn’t want to feed aggressively, so I had to go in after them. It was really slow today. I caught one early and then I had to pick them up as we went along. I had to cover a lot of water because the fish are scattered.”

Ware said he caught his fish by swimming a Reaction Innovations Skinny Dipper and a Texas-rigged Senko. He ended up catching fish in a variety of habitat from reeds, to lily pads to maiden cane.

“You would have thought that with the cloud cover, the fish would have gotten aggressive,” Ware said. “For us, at least, we found that the fish went up in the weeds.” 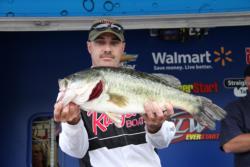 12. A Texas-rigged Zoom Old Monster worm (green pumpkin and junebug) was his go-to bait on a day that required him to make a positioning adjustment to reacquire the fish he had targeted in practice.

“I had a lot of fish on beds (in practice) but they were gone today, so I just backed up a little bit and started fishing the same areas,” he said. “I was targeting stumps today. The fish just pulled out of the beds and moved out (to the deeper structure).”

Allen said he got off to a fast start on day one. 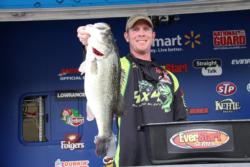 Concentrating on ditches in about six feet, Florida pro Brandon McMillan fished a jig and a Zara Spook and took fifth place with 19-11. Meandering in and out of the ditches produced quality bites, but they were few and far between.

“The bite really slowed down for me; I didn’t get a lot of bites today,” he said. “It seems like the bites I got were decent fish. I lucked up at the end of the day and caught a big one. It seemed like the later it got, the better the bite was for me.”

Rounding out the top-10 pro leaders at the EverStart Series Santee Cooper event: 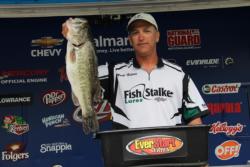 Catching the biggest bass of day one (both divisions) gave David Alfonso more than an ego boost – it propelled him to the co-angler lead with an opening-round weight of 17-9. That 9-pound, 1-ounce 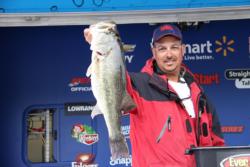 beast – Alfonso’s first fish of the day – helped him amass enough weight to take the top spot by a margin of 3 pounds, 7 ounces.

Alfonso said he caught his fish on frogs and on Senkos. “Fishing slowly was the key. I didn’t catch any of them fishing quickly.”

Mark Cercopely, of Moncks Corner, S.C. trails Alfonso in second with 14-2. He caught his day-one fish on Texas-rigged worm and a Skinny Dipper. He tried the latter early, but quickly determined that the moving presentation wasn’t happening, so he spent the rest of his day on the Texas rig.

“They didn’t seem like they wanted to chase anything today, so I slowed it down and went to a worm and started catching fish,” he said.

Rounding out the top-10 co-angler leaders at the EverStart Series Santee Cooper event: